How to Use Kubernetes Secrets with Environment Variables and Volume Mounts 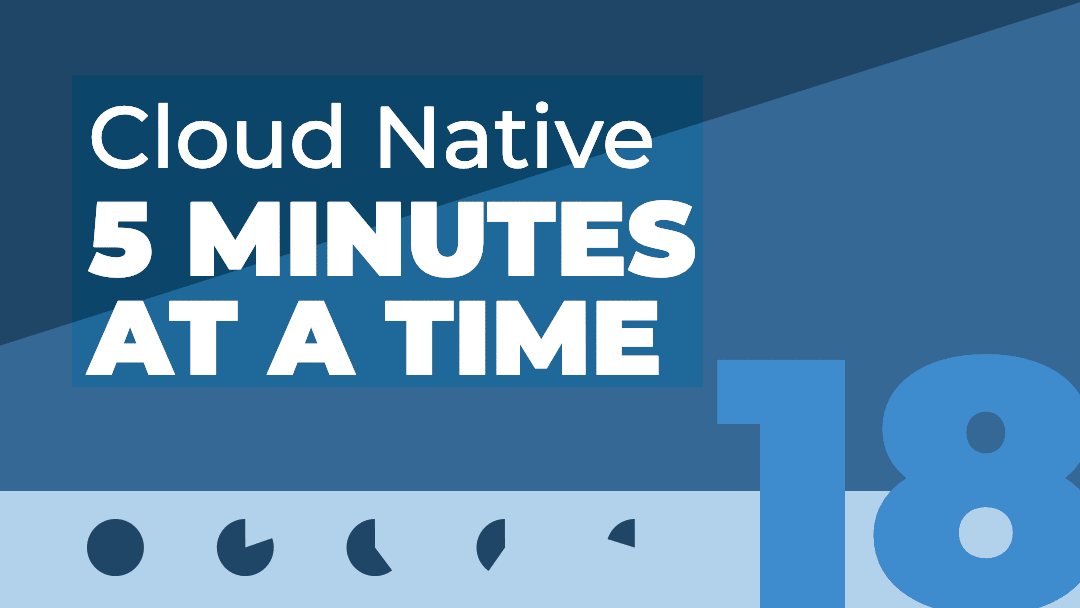 In the last lesson, we used a dynamically provisioned PersistentVolume to store data in Kubernetes—specifically, in a containerized MySQL database. But we cut a corner by configuring the password for our database via an environment variable. That’s an insecure approach that we would never want to use in production.

Why? Environment variables are readily visible within their containers, within Kubernetes logs, in the manifests, and to anyone on the cluster with the ability to view the spec. If an attacker gains access to any of these, they will have access to the database’s root password as well. Sub-optimal, to say the least!

Instead of configuring a password directly through an environment variable, we can use KubernetesSecrets. While they aren’t the be-all and end-all of Kubernetes security, Secrets give us a way to add an additional layer of protection for sensitive data.

As we continue our overall project of decomposing a monolithic To Do app into a set of cloud native services, our next step will be to implement and connect our database and API server with Secrets. Along the way, we’ll learn exactly what Kubernetes Secrets are and how they work. These lessons assume a basic understanding of containers. If you need to get up to speed on Docker and containerization, download our free ebook, Learn Containers 5 Minutes at a Time. This concise, hands-on primer explains:


What are Kubernetes Secrets?

Kubernetes Secrets are confidential credentials, stored by default in etcd and available for authorized entities to use in authentication throughout the system.

Essentially, Secrets are placeholders for sensitive information. Once we’ve established a Secret in our cluster, we can use that Secret to inject, say, the value of a “password” environment variable for a database container, rather than specifying the password itself.

Secrets can hold either plaintext or base64-encoded data. The latter is a bit more secure, preventing someone in the same room from seeing a password value at a glance, but you shouldn’t mistake this encoding for encryption.

A word of warning

Before we go any further, I should repeat that Secrets are not the be-all end-all of Kubernetes security. Once a container has consumed a Secret via environment variable, the value is freely available within the container. The value is also stored without encryption in etcd. This is not to say you shouldn’t use Secrets, but rather that you should be aware of their limitations, and they should be only one part of your overall security strategy. We’ll discuss some ways to harden your security further in our final lesson.

You might very reasonably ask: If Secrets come with so many caveats, why do we bother to use them? What are they for? The simple answer is that the Secret is a mechanism for abstracting credentials, which then allows us to programmatically utilize and manage those credentials. With a password captured as a Secret, we can define which users, namespaces, or Pods can access that password. The Secret is intended for no more and no less—it isn’t about encryption, but rather conceptual modeling and access control. As a result, it provides a way to integrate external solutions for better security.

The two most common ways for Pods to consume Secrets are through environment variables and as files injected into the Pod through a volume.

The approach you use may depend on the application you’re working with. In the case of our MySQL server image, we will use an environment variable, because this is how the app is designed to consume credentials. But if we’re designing our own service, we might choose to use the volume-based approach. We’ll use both techniques in today’s exercise.

How to Create a Kubernetes Secret

As with other Kubernetes objects, we can create a Secret straight from kubectl. Enter the following command:

In this command, we have…

Suppose we want to change some of the details of our Secret. We can do so with…

This will use your default command line editor to open the Secret file. On my system, I’m viewing the Secret contents with vi: 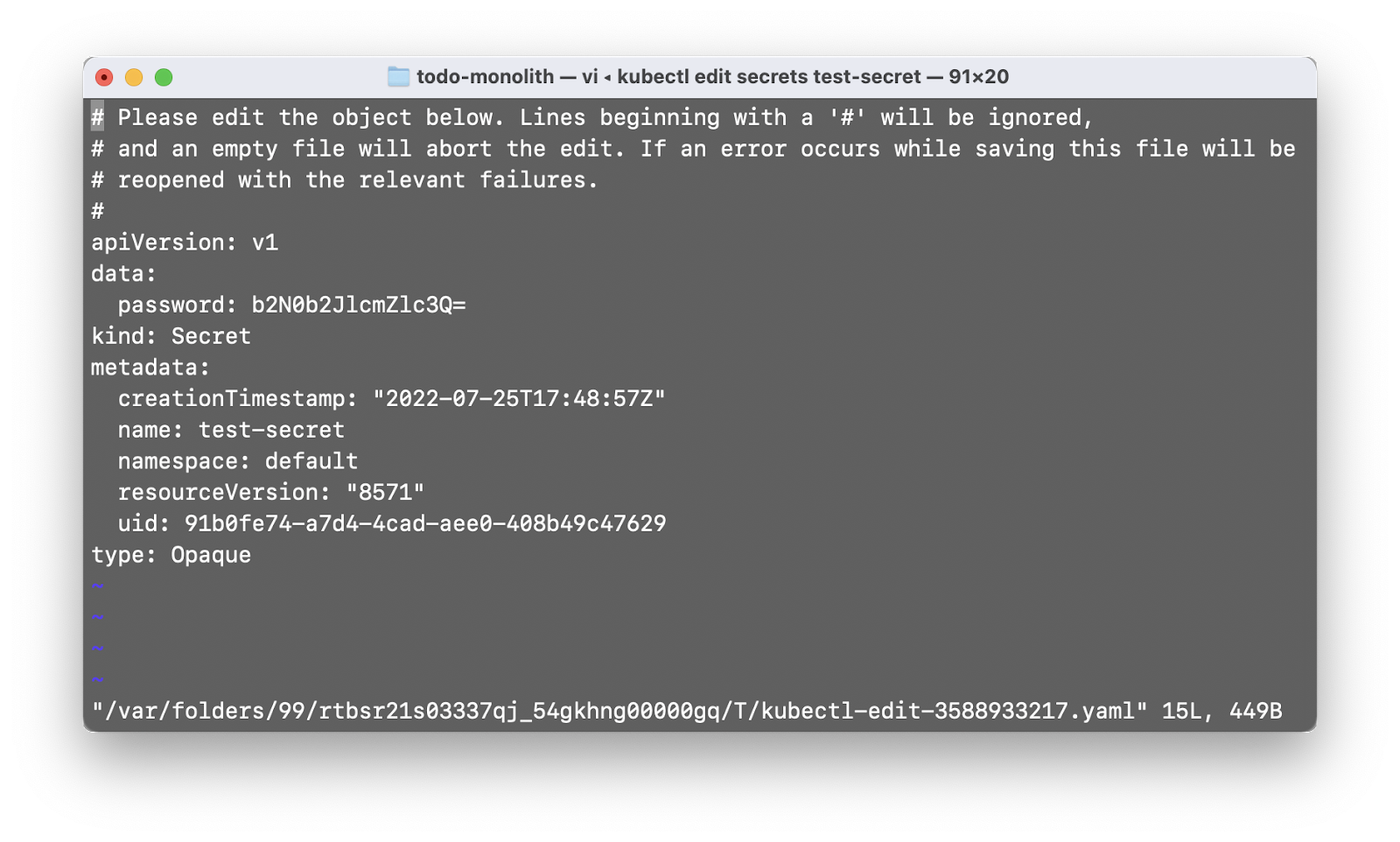 A couple items to note here:

“Opaque” is the default Secret type. When we told kubectl that we wanted a generic Secret, this was what we meant: We want a Secret of the default type. The word “opaque” doesn’t mean a whole lot here—this type could just as easily have been called “generic” or “standard” or “default.” The word opaque is simply assuring us that the value of the Secret is only available to the users, Pods, and namespaces with access…in other words, that it’s doing the basic job of a Secret.

There are several other Secret types available that impose additional constraints on configuration or usage and are pre-defined for specific use-cases. We won’t be using these today, but they’re worth noting for future reference:

Some of these, such as the bootstrap token type, are used by the Kubernetes system itself. Additionally, you can define your own Secret type using a non-empty string as the type value.

Let’s make some changes to our Secret! If you’re using vi for your text editor, you can press i to enter INSERT mode, then add an indented line below the password field. Here, we’ll store a user value of “root” in plaintext, just to demonstrate both editing and plaintext storage. Press ESC and then :w to write/save the file, and then :q to quit vi 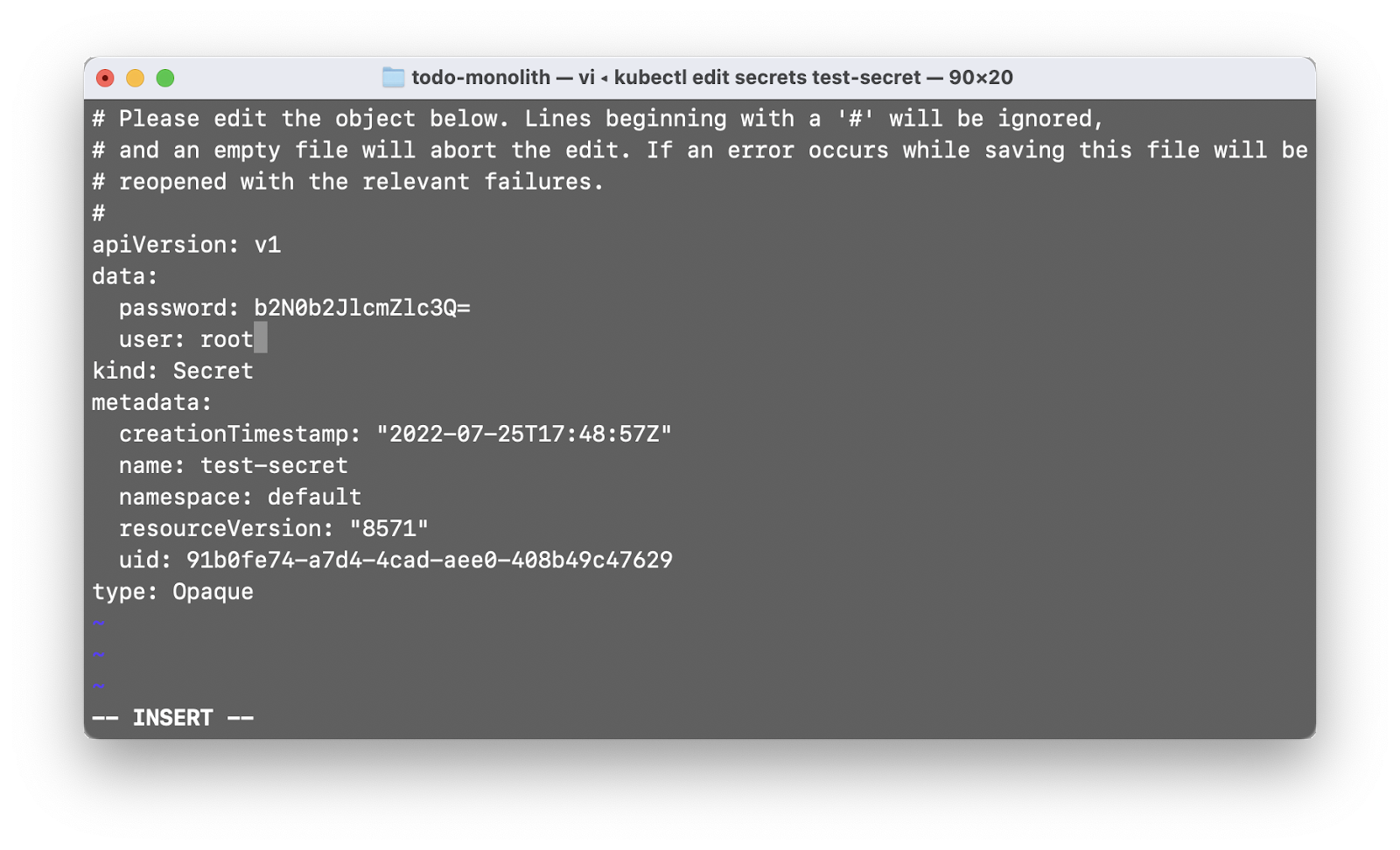 If you edit the Secret again, you can see that the user field is still there.

Now, it’s easy to imagine that you might not want all of your Secrets to be readily editable, not least because someone might accidentally modify them. In such a case, you can make a Secret immutable. To do this, simply add an immutable field set to true in the Secret file: 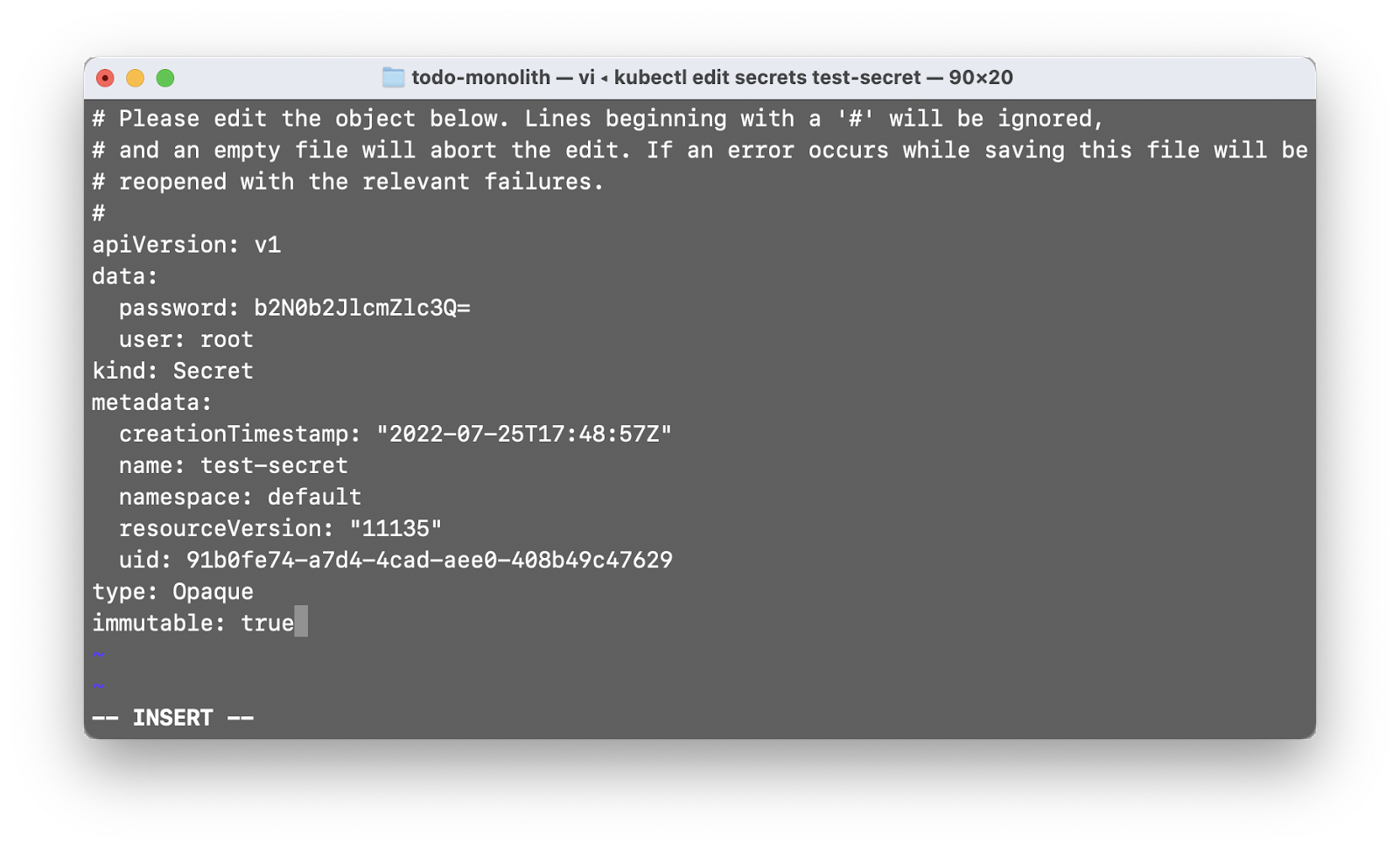 Note: Once you save the file, this particular Secret will no longer be editable (as per your request!). To make any changes, you’ll need to delete this Secret and create a new one.

Immutability not only protects a Secret from accidental modification; it can also help improve performance across your cluster, since an operator can allow the API server to stop watching for changes to immutable Secrets.

Now, we’ve seen Secret creation and management through kubectl, but that’s not the only way to get the job done. Many users will find it easier to use a graphical user interface.

Back in our lesson on Setting up a Kubernetes learning environment, we downloaded and learned to use Lens, which serves as a GUI and management environment for Kubernetes. Let’s open Lens now, connect to our Minikube cluster, and navigate to the Secrets tab (under Configuration).

Here we can see a default token used by the system and the now-immutable test-secret we created. Click on the verticalellipsis icon (⋮) for test-secret and select Remove to delete the Secret.

Now let’s create a new Secret. Click the blue plus (+) icon in the lower right corner. Give your new Secret the name mysqlpwd. Click the plus icon beside Data to add a new field, with password as the name and octoberfest as the value. Click Create. Now the Secret is saved in our cluster. If you return to the command line and run kubectl get secrets, you’ll see mysqlpwd there with one datum, the password.

Now it’s time to use this Secret. To get our MySQL server running, we’re going to use a single, lengthy YAML file that synthesizes much of what we’ve learned over the past few lessons. (You can find a copy of the YAML file on GitHub here.) Create a new directory for this lesson called /secrets/ and a subdirectory called /manifests/, then inside create a new YAML file called todo-mysql.yml with the code below.

There’s a lot going on here, but don’t worry—we’ll go through the manifest step-by-step:

Don’t worry too much about the StatefulSet at the moment—it’s a big, important topic that we’re going to explore in depth in the next lesson. For now, just note that it is an API resource roughly analogous to a Deployment.

We’re using the env field to define environment variables for MYSQL_DATABASE and MYSQL_ROOT_PASSWORD, which the MySQL container image is designed to utilize. We’ve defined the values of those variables in two different ways—directly, in the case of todo_db, and through our mysqlpwd Secret for the root password. We’ve defined that with the secretKeyRef field, the value of which is an object identifying the Secret’s name and which piece of data from the Secret that we wish to use.

Let’s use this YAML manifest to create our Storage Class, Service, and StatefulSet all at once. From the /manifests/ directory where our new todo-mysql.yml file is stored:

Our next step is to launch our To Do app’s backend service. The backend will access the MySQL server using the root password, which it will consume via the Secret mounted from a volume.

There’s no need to completely decompose our monolith into frontend and backend at this stage. At this point, we’ll stand up a skeleton to perform the bare essentials before moving on to the next steps of decomposition. For our purposes here, the essentials include:

To implement these functionalities and ensure they’re working properly, we’ll write our skeleton application from scratch. In your /secrets/ directory, create a new folder called /5min-dbcheck/. Within that directory, run:

In your index.js file, add the following:

Now let’s get this running on the cluster. If you’d like to use my code or container image, they are available on GitHub and Docker Hub respectively. To build an image locally, we can use the standard Dockerfile we’ve used for Node applications so far:

Build the container image and then upload it to Docker Hub:

Return to the root project directory for this chapter, where you’ve been storing your manifests. Create a new Deployment manifest called 5min-dbcheck.yml that contains the following:

Now we can check our new app’s logs to verify whether it has mounted the Secret and connected to the database server successfully. We can do this either using kubectl exec as before or by using the Logs button in Lens.

I’ll use Lens—under the Workloads > Pods tab, select the 5min-dbcheck Pod. At the top of the Pod details pane, select the Logs icon.

When the app conducts its connectivity check, you should see “Connected!” 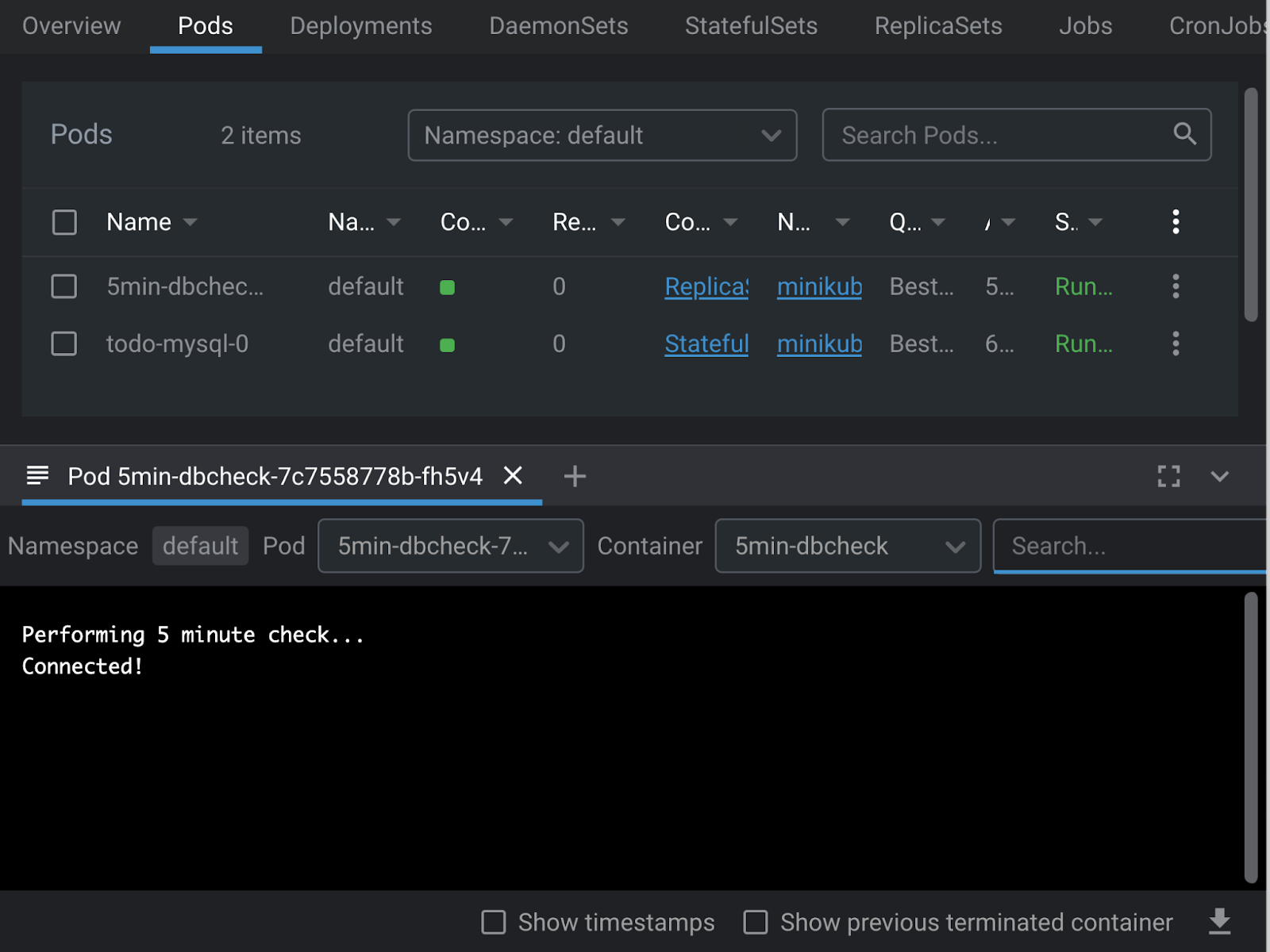 We’ve accomplished quite a bit this lesson:

Next time, we’ll learn more about the StatefulSet API resource and how it acts as a manager for stateful applications, and then learn how to create a horizontally-scalable database server.