Containers are often intended to solve a single, narrowly defined problem, such as a microservice, but in the real world, problems require multiple containers for a complete solution. In this article, we're going to talk about combining multiple containers into a single Kubernetes Pod, and what it means for inter-container communication.

What is a Kubernetes Pod?

Let's start by explaining what a Pod is in the first place. A Pod is is the smallest unit that can be deployed and managed by Kubernetes. In other words, if you need to run a single container in Kubernetes, then you need to create a Pod for that container. At the same time, a Pod can contain more than one container, usually because these containers are relatively tightly coupled. How tightly coupled?  Well, think of it this way: the containers in a pod represent processes that would have run on the same server in a pre-container world. And that makes sense, because in many respects, a Pod acts like a single server. For example, each container can access the other containers in the pod as different ports on localhost.

Why does Kubernetes use a Pod as the smallest deployable unit, and not a single container?

While it would seem simpler to just deploy a single container directly, there are good reasons to add a layer of abstraction represented by the Pod. A container is an existing entity, which refers to a specific thing. That specific thing might be a Docker container, but it might also be a rkt container, or a virtual machine (VM) managed by Virtlet. Each of these has different requirements. What's more, Kubernetes needs additional information for container management, such as a restart policy, which defines what to do with a container when it terminates, or a liveness probe, which defines an action to detect if a process in a container is still alive from the application's perspective, such as a web server responding to HTTP requests. Instead of overloading the existing "thing" with additional properties, Kubernetes architects have decided to use a new entity, the Pod, that logically contains (wraps) one or more containers that should be managed as a single entity.

Why does Kubernetes allow more than one container in a Pod?

Containers in a Pod run on a "logical host"; they use the same network namespace (in other words, the same IP address and port space), and the same IPC namespace. They can also use shared volumes. These properties make it possible for these containers to efficiently communicate, ensuring data locality. Also, Pods enable you to manage several tightly coupled application containers as a single unit. So if an application needs several containers running on the same host, why not just make a single container with everything you need? Well first, you're likely to violate the "one process per container" principle. This is important because with multiple processes in the same container, it is harder to troubleshoot the container because logs from different processes will be mixed together, and it is harder to manage the processes lifecycle, for example to take care of "zombie" processes when their parent process dies. Second, using several containers for an application is simpler and more transparent, and enables decoupling software dependencies. Also, more granular containers can be reused between teams.

Use Cases for Multi-Container Pods

The primary purpose of a multi-container Pod is to support co-located, co-managed helper processes for a primary application. There are some general patterns for using helper processes in Pods: While you can host a multi-tier application (such as WordPress) in a single Pod, the recommended way is to use separate Pods for each tier, for the simple reason that you can scale tiers up independently and distribute them across cluster nodes.

Communication between containers in a Pod

Having multiple containers in a single Pod makes it relatively straightforward for them to communicate with each other. They can do this using several different methods.

Shared volumes in a Kubernetes Pod

In Kubernetes, you can use a shared Kubernetes Volume as a simple and efficient way to share data between containers in a Pod. For most cases, it is sufficient to use a directory on the host that is shared with all containers within a Pod. Kubernetes Volumes enables data to survive container restarts, but these volumes have the same lifetime as the Pod. That means that the volume (and the data it holds) exists exactly as long as that Pod exists. If that Pod is deleted for any reason, even if an identical replacement is created, the shared Volume is also destroyed and created anew. A standard use case for a Kubernetes multi-container Pod with a shared Volume is when one container writes logs or other files to the shared directory, and the other container reads from the shared directory. For example, we can create a Pod like so: In this example, we define a volume named html. Its type is emptyDir, which means that the volume is first created when a Pod is assigned to a node, and exists as long as that Pod is running on that node. As the name says, it is initially empty. The 1st container runs nginx server and has the shared volume mounted to the directory /usr/share/nginx/html. The 2nd container uses the Debian image and has the shared volume mounted to the directory /html. Every second, the 2nd container adds the current date and time into the index.html file, which is located in the shared volume. When the user makes an HTTP request to the Pod, the Nginx server reads this file and transfers it back to the user in response to the request. 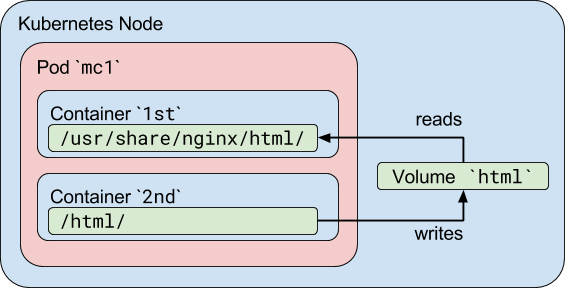 You can check that the pod is working either by exposing the nginx port and accessing it using your browser, or by checking the shared directory directly in the containers:

Containers in a Pod share the same IPC namespace, which means they can also communicate with each other using standard inter-process communications such as SystemV semaphores or POSIX shared memory. In the following example, we define a Pod with two containers. We use the same Docker image for both. The first container, producer, creates a standard Linux message queue, writes a number of random messages, and then writes a special exit message. The second container,  consumer, opens that same message queue for reading and reads messages until it receives the exit message. We also set the restart policy to 'Never', so the Pod stops after termination of both containers. To check this out, create the pod using kubectl create and watch the Pod status: Now you can check logs for each container and verify that the 2nd container received all messages from the 1st container, including the exit message:

There is one major problem with this Pod, however, and it has to do with how containers start up.

Currently, all containers in a Pod are being started in parallel and there is no way to define that one container must be started after other container. For example, in the IPC example, there is a chance that the second container might finish starting before the first one has started and created the message queue. In this case, the second container will fail, because it expects that the message queue already exists. In a cloud native environment, it's always better to plan for failures outside of your immediate control.  For example, one way to to fix this issue would be to change the application to wait for the message queue to be created. That said, you do have the opportunity to use Init Containers, which run before application containers. What's more, they run in the order you specify. For example, consider this example from the official docs: In this case, Kubernetes runs init-myservice until it is successful, then init-mydb, and then the myapp-container application. You can make use of Init Containers to ensure that any groundwork your app containers need has been laid.

Containers in a Pod are accessible via "localhost"; they use the same network namespace. Also, for containers, the observable host name is a Pod’s name. Because containers share the same IP address and port space, you should use different ports in containers for incoming connections. In other words, applications in a Pod must coordinate their usage of ports. In the following example, we will create a multi-container Pod where nginx in one container works as a reverse proxy for a simple web application running in the second container. Step 1. Create a ConfigMap with the nginx configuration file. Incoming HTTP requests to port 80 will be forwarded to port 5000 on localhost: Step 2. Create a multi-container Pod with the simple web app and nginx in separate containers. Note that for the Pod, we define only nginx port 80. Port 5000 will not be accessible outside of the Pod. Step 3. Expose the Pod using the NodePort service: Step 4. Identify port on the node that is forwarded to the Pod: Now you can use your browser (or curl) to navigate to your node’s port  to access the web application through reverse proxy, as in: http://myhost:31418 This request will then be forwarded to port 5000 of the webapp container.

Exposing multiple containers in a Pod

Where to go from here

By creating pods, Kubernetes provides a great deal of flexibility for orchestrating how containers behave, and how they communicate with each other. They can share file volumes, they can communicate over the network, and they can even communicate using IPC. That's just the beginning, of course. Interested in seeing what else you can do and getting more hands-on with Kubernetes? Check out our Cloud Native Operations Bootcamp (CN251) - which covers most of the topics for the Certified Kubernetes Administrator (CKA) exam. Hope to see you there!