We’ve learned from experience that the truth will come out.
Richard Feynman

For quite a long time there has been a common misconception that Neutron is not production-ready and has performance issues. The MOS-Neutron team aspired to put an end to these rumors and perform Neutron-focused performance and scale testing. We ran a great number of control-plane, data-plane and density tests, and came to the conclusion that Neutron is ready for production.

[NOTE: This report has been updated with Rally test results.]

The purpose of this document is to describe the process and show the results of testing MOS 9.0 (Mitaka based) at scale performed by MOS Neutron team. The testing was focused on the Neutron component, but due to the integrated nature of the tests, all other components of the product (Rabbit cluster, DB, Nova, Ceph, Keystone, and so on) were tested as well.

The testing was performed on three environments with different HW configurations.

The idea of this test is to create a group of resources and verify that it stays persistent no matter what other operations are performed on the environment (resources creation/deletion, heavy workloads, etc.). 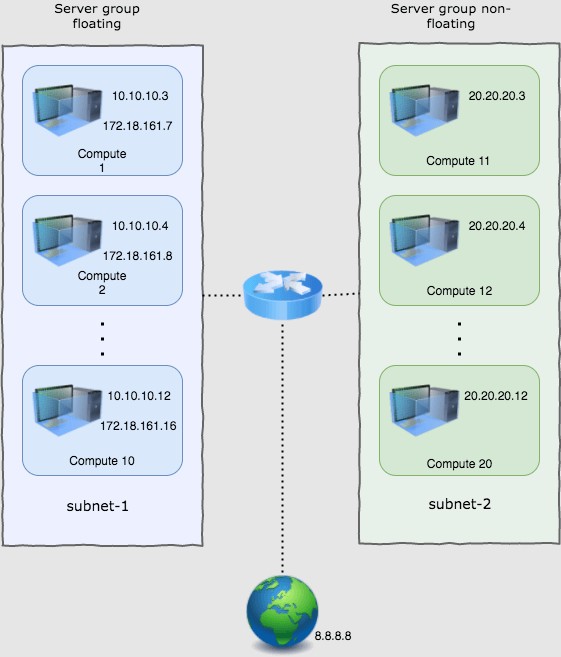 For each of the instances the following connectivity checks are made: 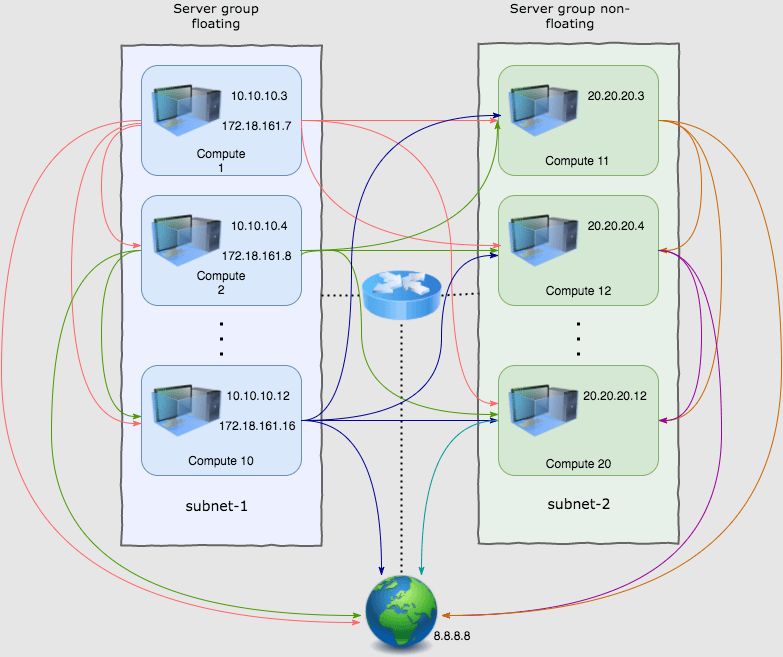 Lists of IPs to ping from the VM are formed in a way to check all possible combinations with minimum redundancy. Having VMs from different subnets with and without floating IPs ping each other and an external resource (8.8.8.8) allows us to check that all possible traffic routes are working. For example: 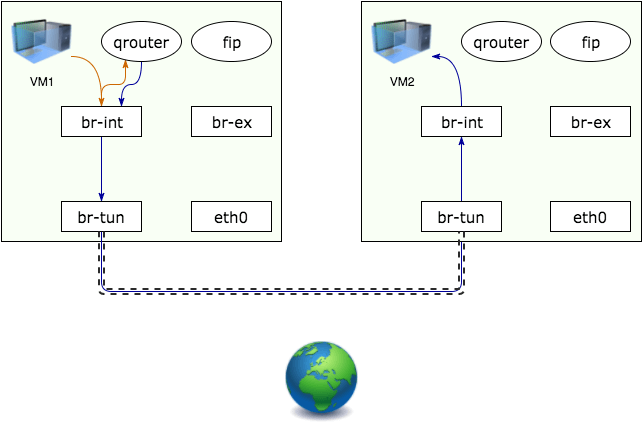 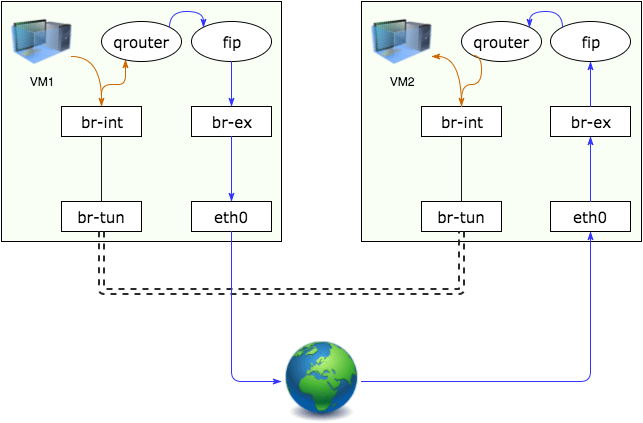 Steps to setup and run the test:

The check_connectivity test should be performed between other test runs.

The idea is to boot as many VMs as possible (in batches of 200-1000 VMs) and make sure they are properly wired and have access to the external network. The test allows us to measure the maximum number of VMs which can be deployed without issues with cloud operability, etc.

The external access is checked by the external server to which VMs connect upon spawning. The server logs incoming connections from provisioned VMs which send their IPs to this server via POST requests. Instances also report the number of attempts it took to get an IP address from the metadata server and connect to the HTTP server, respectively.

A Heat template was used for creating 1 network with a subnet, 1 DVR router, and 1 VM per compute node. Heat stacks were created in batches of 1 to 5 (5 most of the time), so 1 iteration effectively means 5 new networks/routers and 196 * 5 VMs. During the execution of the test we were constantly monitoring the lab’s status using the Grafana dashboard and checking agents’ status.

As a result we were able to successfully create 125 Heat stacks, which gives us a total of 24500 VMs, which is two times more than we were able to create on MOS 7.0 (according to the MOS 7.0 performance test report). 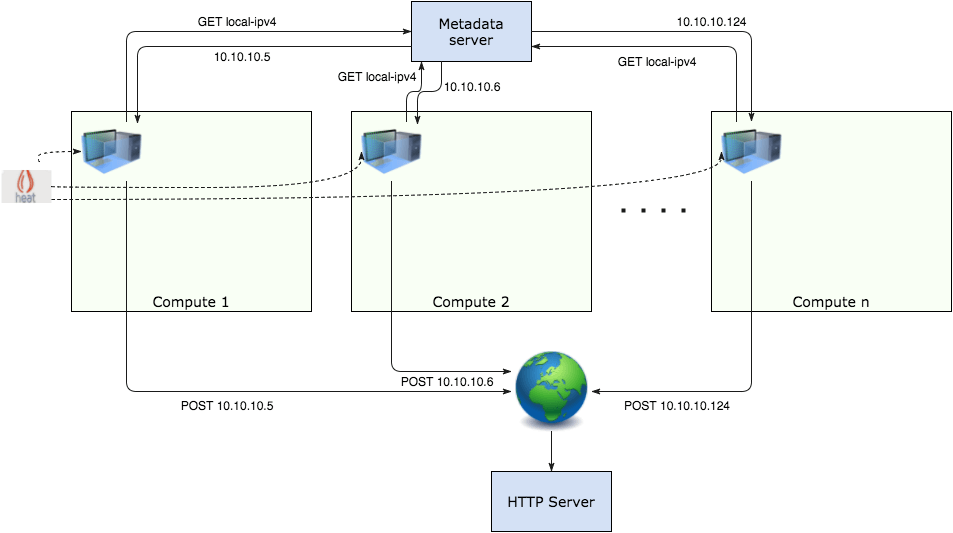 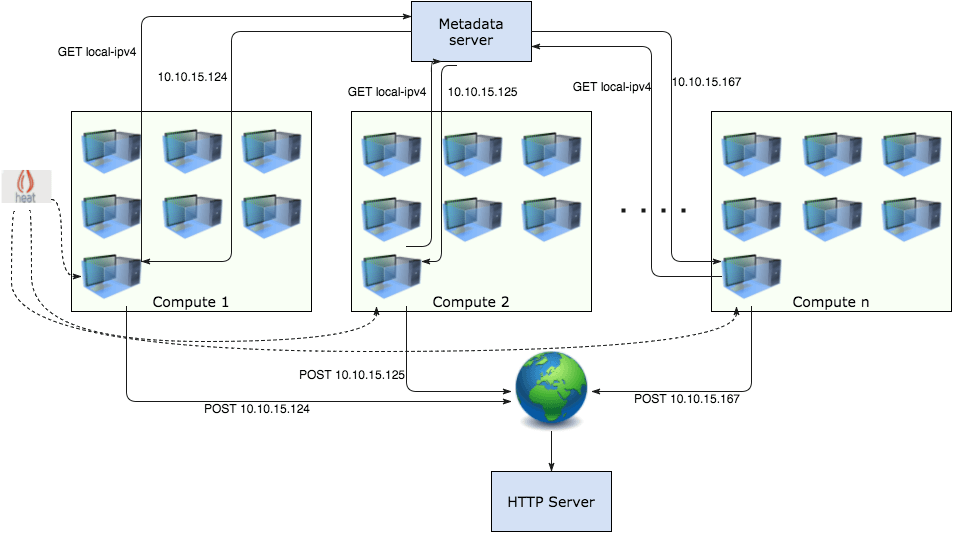 Here’s what the Grafana dashboard looks like during the density test: 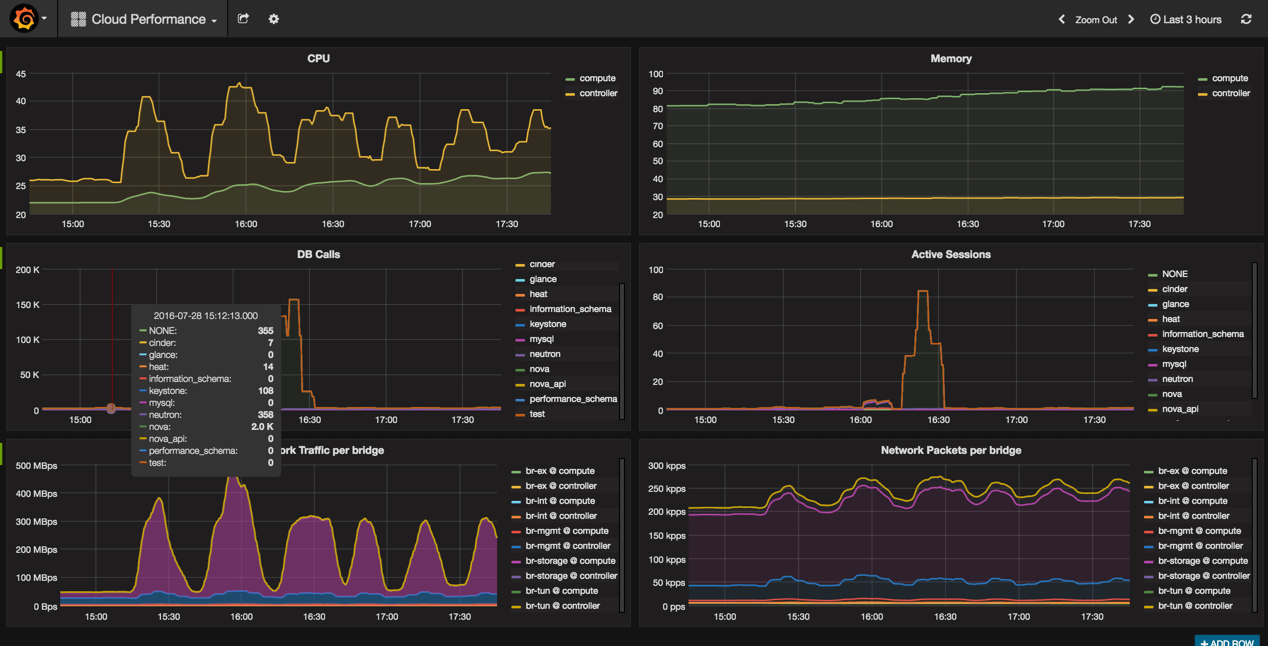 Analysis of cluster state data from Grafana shows that average CPU consumption on controllers and computes increases gradually with the growing number of VMs. The main limitation in the density test is memory capacity of the compute nodes. 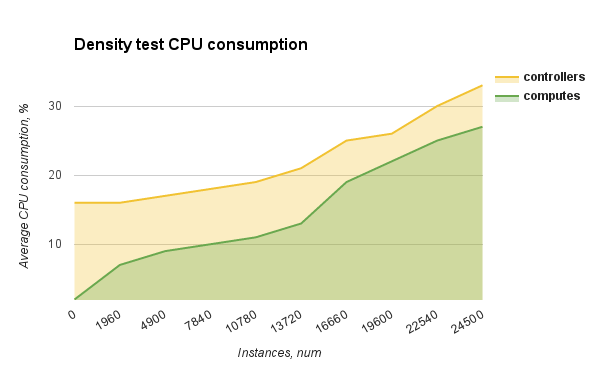 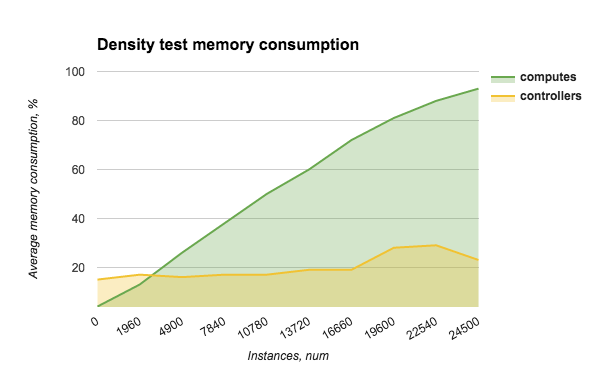 During testing, we encountered and patched several bugs, and tuned the node configuration in order to comply with the growing number of VMs per node. Adjustments included:

At ~16000 VMs we reached ARP table size limit on compute nodes, so Heat stack creation started to fail. Having increased maximum table size we decided to cleanup failed stacks. In attempting to do so we ran into a Nova issue (LP #1606825 nova-compute hangs while executing a blocking call to librbd): on VM deletion, nova-compute may hang for a while executing a call to librbd and eventually go down in nova service-list output. This issue was fixed with the help of the Nova team, and the fix was applied on the lab as a patch.

After launching ~20000 VMs the cluster started experiencing problems with RabbitMQ and Ceph; when the number of VMs reached 24500, services and agents started to massively go down. The initial failure might have been caused by the lack of allowed PIDs per OSD node (https://bugs.launchpad.net/fuel/+bug/1536271), and the resulting Ceph failure affected all services. For example, mysql errors in neutron server lead to agents going down and massive resource rescheduling/resync. After Ceph failure the cluster could not be recovered, so the density test had to be stopped before the capacity of compute nodes was exhausted.

The Ceph team commented that 3 Ceph monitors aren’t enough for over 20000 VMs (each having 2 drives) and recommended having at least 1 monitor per ~1000 client connections. You can also move them to dedicated nodes.

Note: Connectivity check of Integrity test passed 100% even when cluster went crazy. That is a good illustration of control plane failures not affecting data plane.

If we’re testing, we should look at Rally, which is designed specifically for benchmarking.

Let’s look at the Rally neutron test suite with default configuration. It is most useful for validating cloud operability. 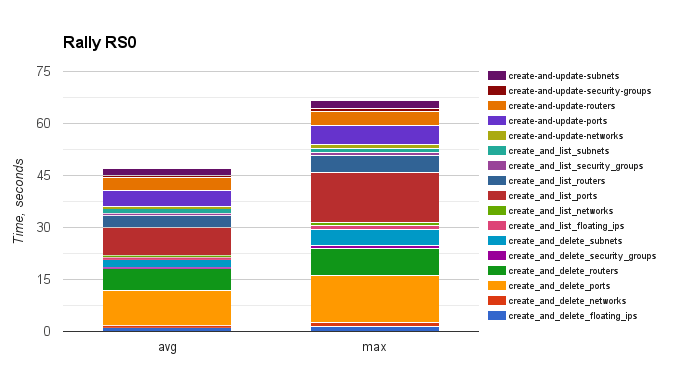 We also performed tests with an increased number of iterations and concurrency in order to create sufficient load on the control plane. In our tests we used concurrency 50-100 with 2000-5000 iterations.

The Rally RS1 results on Lab A and Lab C are:

During execution of Rally were filed and fixed bugs affecting boot-and-delete-server-with-secgroups and boot-runcommand-delete scenarios on Lab A:

Other bugs that were faced:

RS2 (Neutron scale with many networks)

The aim of this test is to create a large number of networks, subnets, routers and security groups with rules per tenant. Each network has a single VM. In our tests 100 networks (each with a subnet, router and a VM) were created per each iteration.

Load graph for run with 20 iterations/concurrency 3

RS3 (Neutron scale with many servers)

The outline of this test is almost the same as of RS2. The main difference is that during each iteration this test creates many number of VMs (100 in our case) per a single network, hence it is possible to check the case with a large number of ports per subnet.

Load graph for run with 20 iterations/concurrency 3

Rally results for all test suites

Results for all Rally test suites demonstrate stable, almost line-rate, behavior on a loaded environment when a lot of resources are created concurrently.

Shaker is a distributed data-plane testing tool for OpenStack. Shaker wraps around popular system network testing tools such as iperf3 and netperf (with the help of flent). Shaker is able to deploy OpenStack instances and networks in different topologies. The Shaker scenario specifies the deployment and list of tests to execute.

Shaker deploys the required topology using Heat templates and starts lightweight agents that execute tests and report the results back to server. In case of network testing, only master agents are involved, while slaves are used as back-ends handling incoming packets. 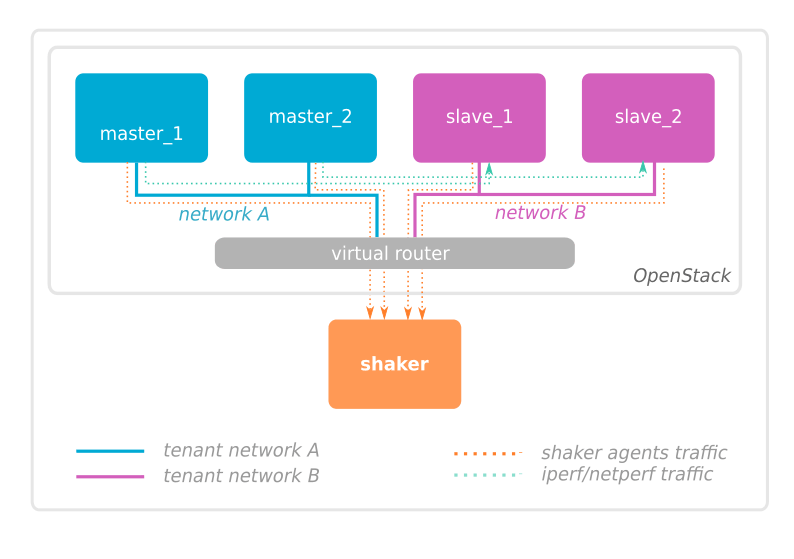 Our data plane performance testing started on the Lab A (QA 200-node lab) deployed with DVR/VxLAN/L2pop with standard configuration. Having run the Shaker test suite, we saw disquietingly low throughput: in east-west bi-directional tests upload/download throughput was about 561/528 Mbits/sec!  These results suggested that it would be reasonable to update the MTU from the default, 1500, to 9000, which is commonly used in customer installations.

Making this change led to throughput increasing by almost 7 times and reaching 3615/3844 MBits/sec in the same test case.

Such a large difference in the results shows that performance, to a very real extent, depends on a lab’s configuration. 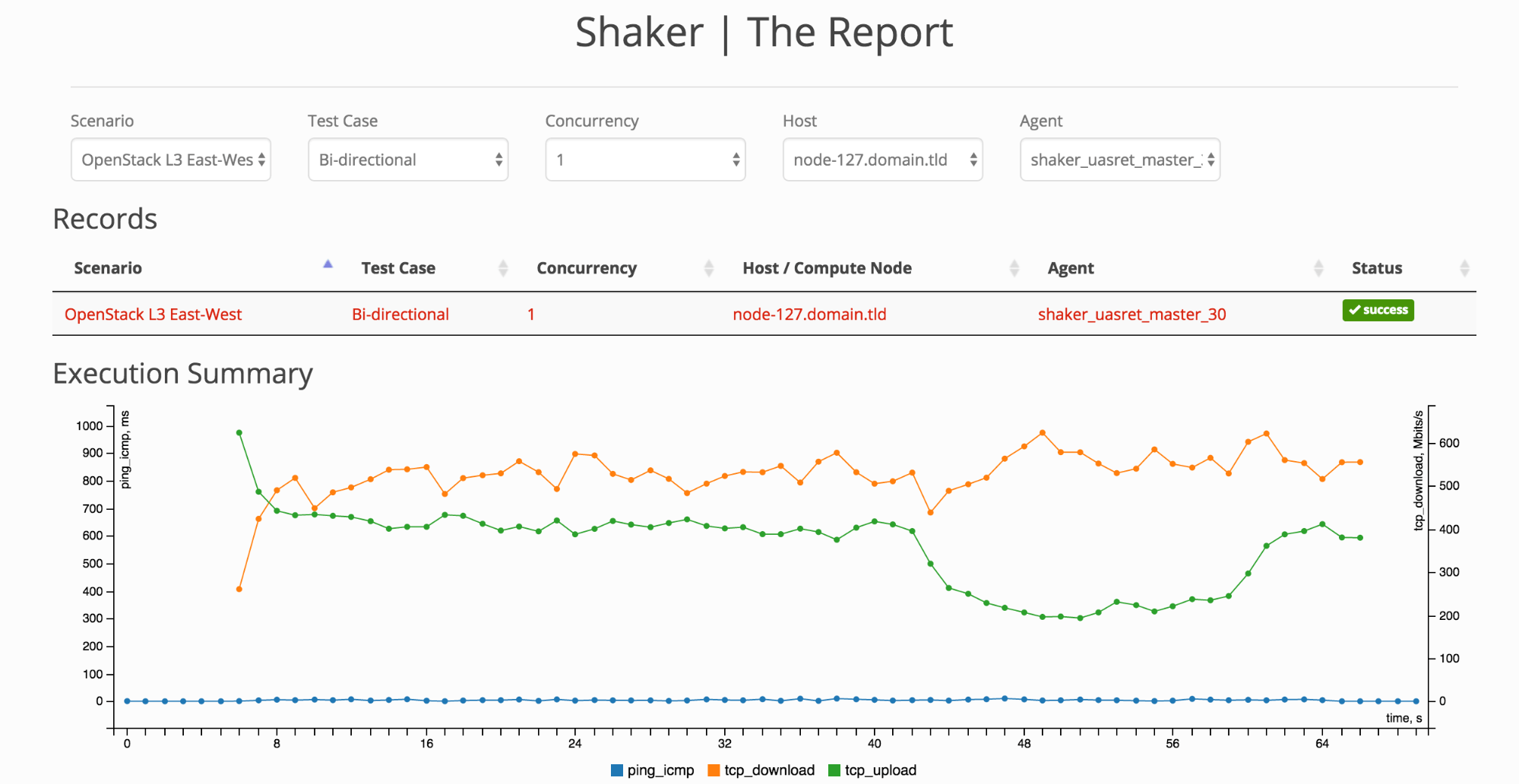 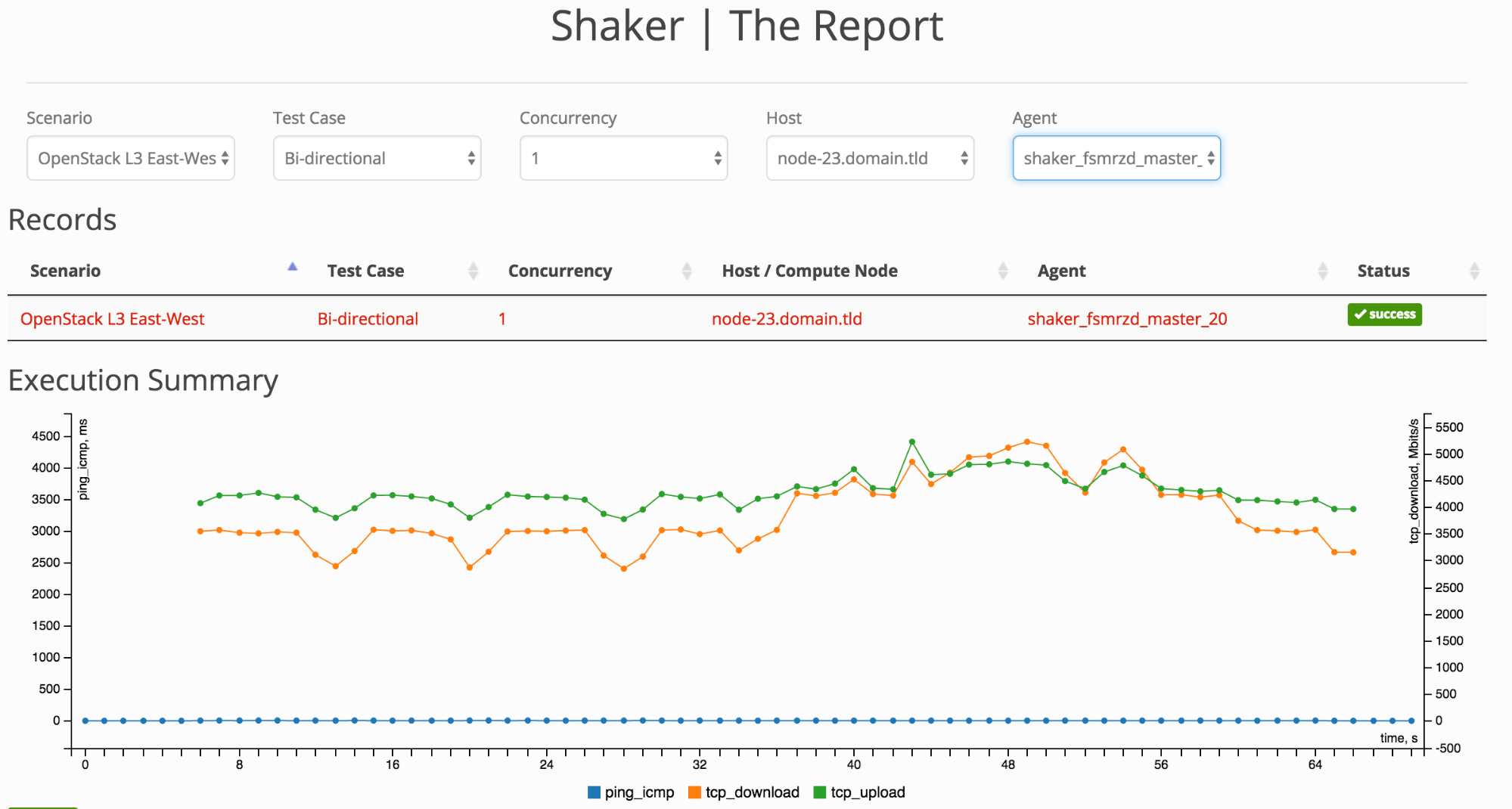 Shaker results for Lab A

The other feature that is important in terms of network performance is hardware offloads. They are especially needed when VxLAN tunneling segmentation (with 50 bytes overhead) comes in. VxLAN hardware offloads allow to significantly increase throughput while reducing load on CPU. [6] Not all hardware supports this feature, it is required to have modern NICs (Intel X540 or X710). To make full use of this feature one would have to install fresh kernel 4.7 that has most recent fixes and improvements. [7] Lab A didn’t comply with any of these requirements so we had to move on to a lab with more advanced hardware.

The next lab we could get our hands on consisted of 6 nodes (3 controllers + 3 computes) with X710 NICs and running on Ubuntu 14.04 (Lab B). Here we ran Shaker tests with different lab configurations: MTU 1500/9000 and hardware offloads on/off.

Note:  To disable all hardware offloads on an interface the following command is used:

Shaker results for Lab B

As it can be seen on the charts below, hardware offloads are most effective with smaller MTU (i.e. 1500), mostly due to segmentation offloads:

Increasing MTU from 1500 to 9000 also gives a significant boost: 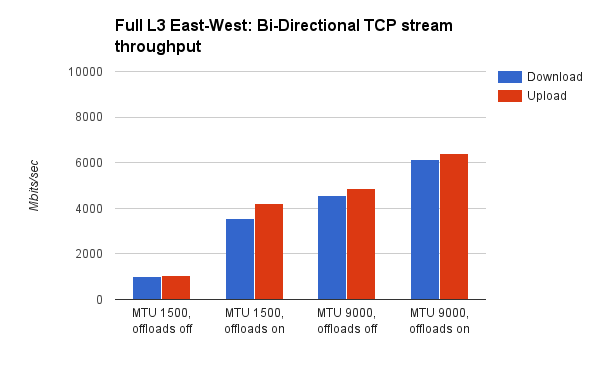 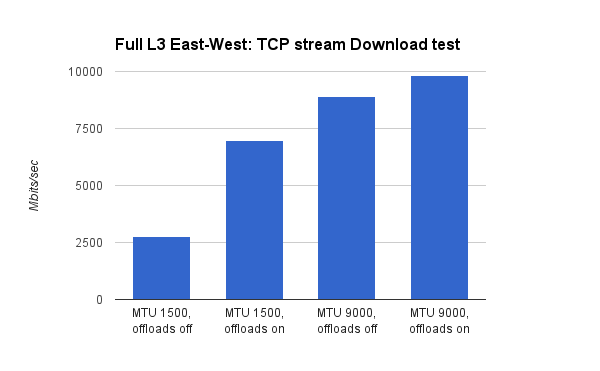 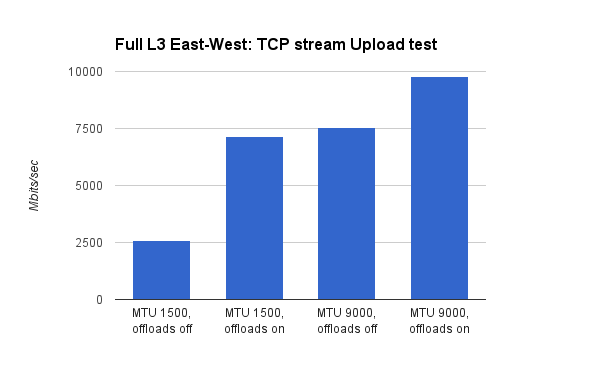 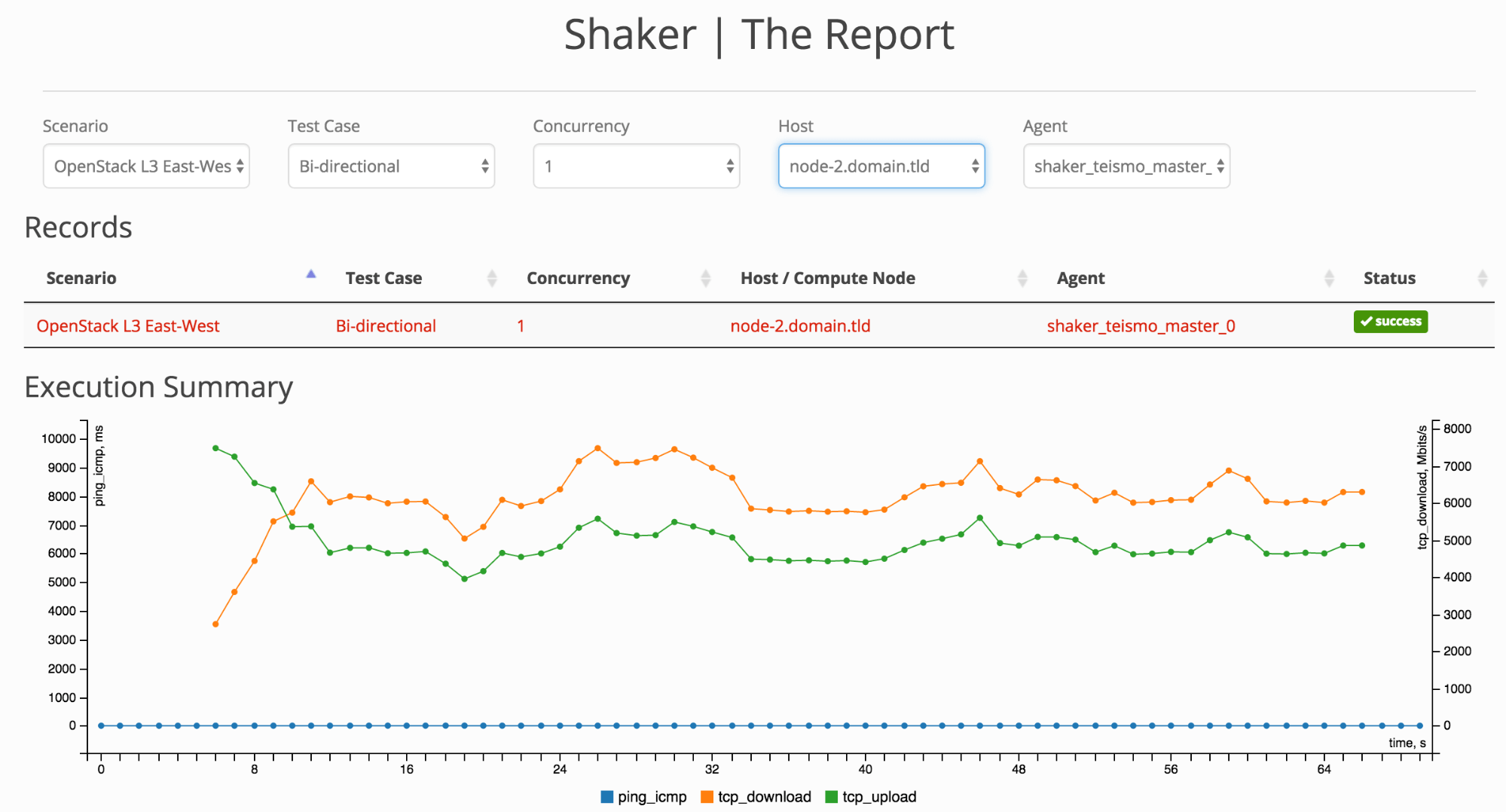 These results show that it makes sense to enable jumbo frames and hardware offloads in production environments whenever possible.

Next step was deploying a large-scale lab which hardware configuration was equal or better than one of Lab B. The new Lab C contained 378 nodes (3 controllers, 375 computes) with each node having 4 bonded 10G X710 interfaces.

On this lab we were able to achieve near line-rate results in L2 and L3 east-west Shaker tests even with concurrency >50: 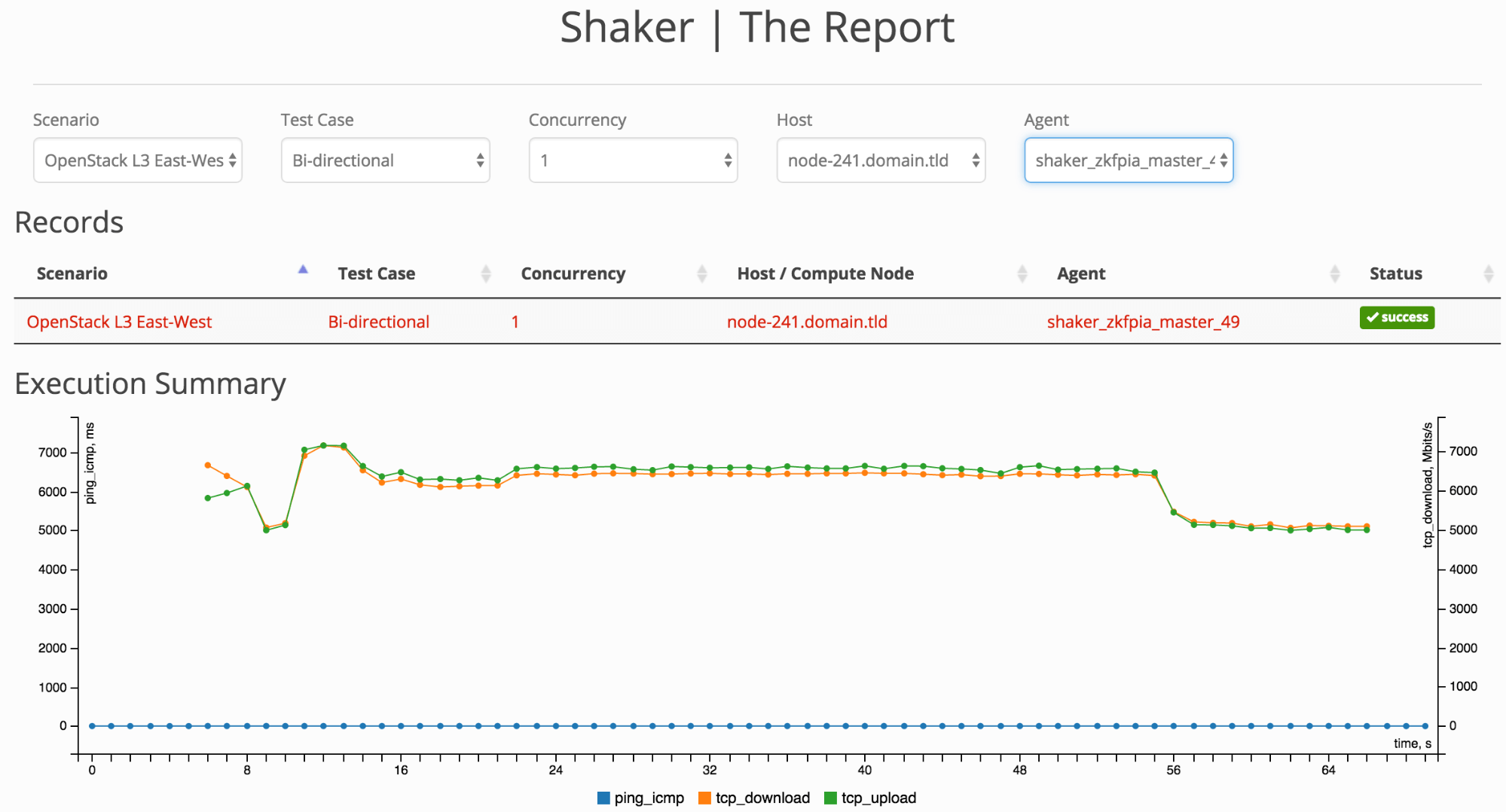 The charts below compare the results that were produced on Lab A and Lab C. 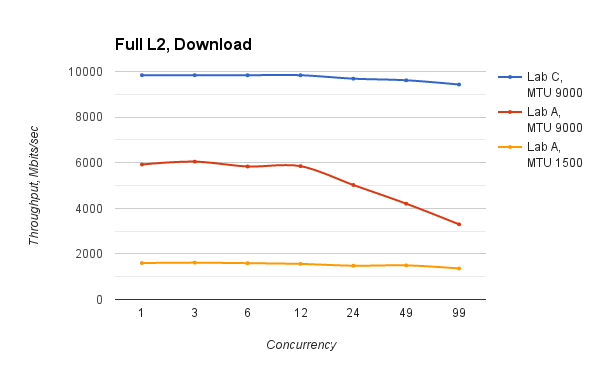 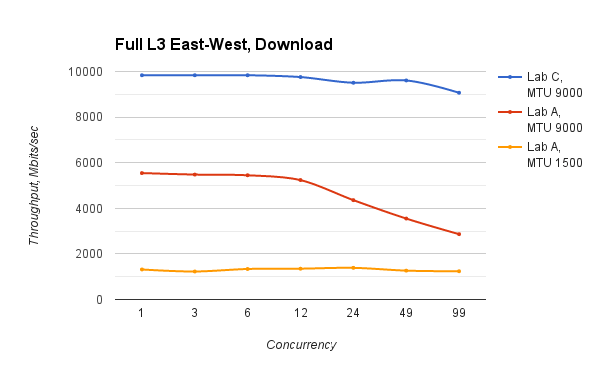 Here it can be seen that running the same test on a lab with enabled jumbo frames and supported hardware offloads leads to sufficient increase of throughput, that keeps stable even with high concurrency. 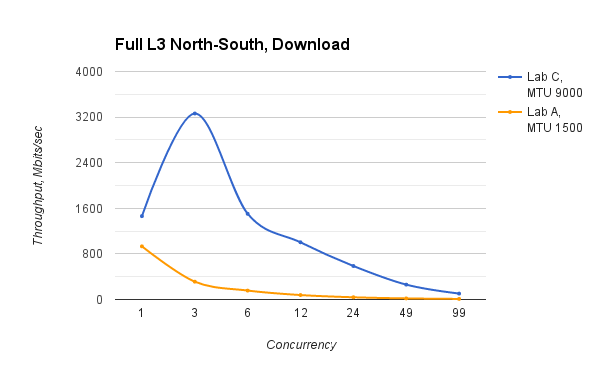 L3 North-South performance is still far from being perfect and may be further investigated and improved, though the resulting throughput depends on many factors including configuration of a switch and lab topology (whether nodes are situated in the same rack or not, etc.) AND MTU in the external network that must always considered to be 1500. It should also be remembered that in North-South test all the traffic goes through the controller which in case of high concurrency may get flooded. 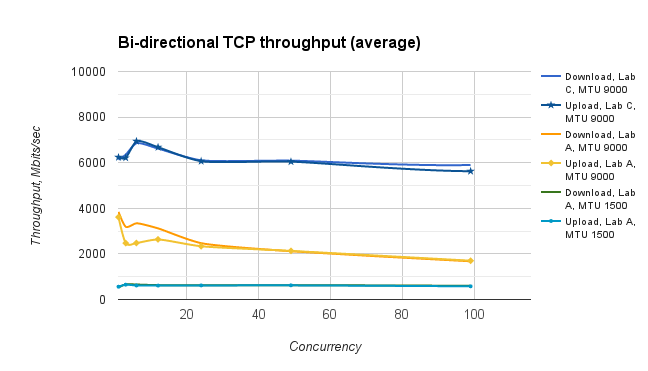 The average results that are shown on graphs above are often affected by corner cases when the channel gets stuck due to various reasons and throughput drops significantly. To have a fuller understanding of what throughput is achievable one can take a look at a chart with most successful results. 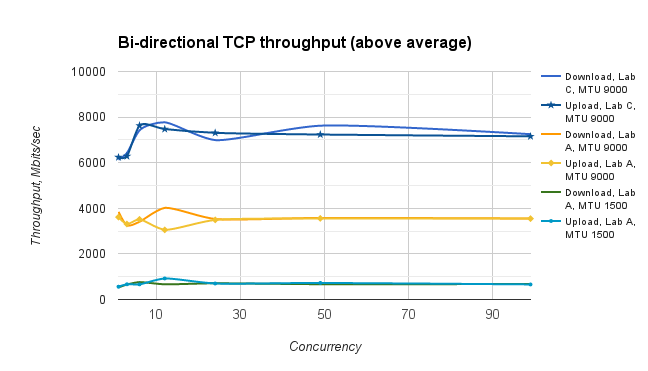 In comparison with results that were achieved on MOS 7.0 on lab with the same configuration as Lab A, MTU 9000, the results remain stable without any performance degradation. Throughput that was observed on a lab with more advanced NICs proves that Neutron DVR+VxLAN+L2pop installations are capable of very high performance with the only bottleneck being hardware configuration and MTU settings.