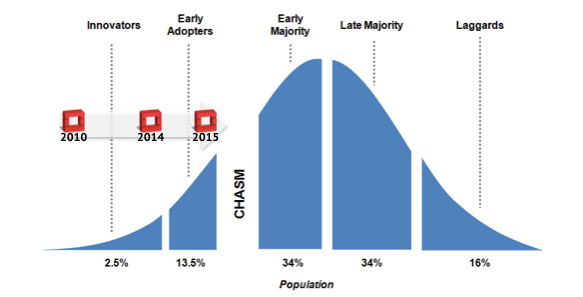 This is the realm of proud DIYers blazing the trail ahead. They love to experiment, doing all the hardware and software engineering possible as they work to understand, implement, and eventually deploy a new system like OpenStack. I wrote last year about how Nebula introduced an appliance to this audience, and ultimately closed its doors. They discovered that the last thing OpenStack Early Adopters wanted was a pre-engineered system. Today, however, adoption of OpenStack is crossing the chasm to the Early Majority part of Moore’s curve, where proven yet innovative solutions providing low risk prevail. The semi-annual OpenStack User Survey, published last week, showed that standardization was the most frequently chosen business driver for choosing OpenStack, and that enterprises are most interested in OpenStack improving documentation and API consistency, and further automating deployment. 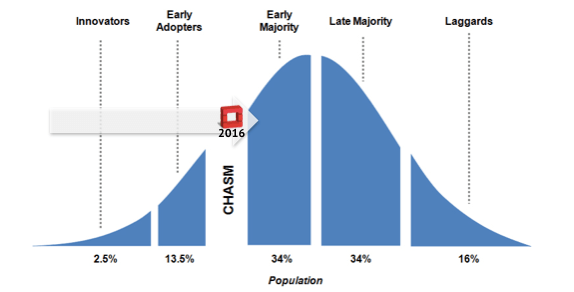 Meanwhile, there has been an increase in the volume of companies using OpenStack, and in the proportion of them doing so in production - again signaling that the Early Majority is arriving for OpenStack. The Survey had respondents from 1,111 unique organizations - 25% more than the last survey - indicating a growth in OpenStack's overall user base - and more than half indicated that they were running OpenStack in production. Mirantis has also seen an uptick in enterprise customers coming to us with the intention to bet their business on OpenStack, not experiment with bleeding-edge IaaS technology. AT&T, for example, has the largest known OpenStack cloud in the world with 74 data centers. And although they are not in production quite yet, new customers like Volkswagen are betting the future of their businesses on the software. OpenStack’s Early Majority wants easy to use, easy to adopt, pre-integrated solutions -- but they still don’t want vendor lock-in. Fortunately, the nature of OpenStack makes that possible.  Mirantis Unlocked Appliances are just that - unlocked - meaning that companies can have a low-risk, prescriptive, way to deploy OpenStack, while still being able to choose from different hardware solutions while using a standardized OpenStack distribution provided in the form of an appliance.  It is standard Mirantis OpenStack with standard OpenStack APIs, not a different product. To that end, as we all head into OpenStack Summit in Austin, Mirantis will introducetwo new Unlocked Appliances that broaden customer choice and value within the program. Ironically, the recent Early Majority companies are not the only ones interested in Appliances. Some of our larger Early Adopter customers are now looking at appliance-like models as they build their private clouds. They have figured out what they want to do with OpenStack. They have successfully deployed it. Now these adamant DIYers face the challenge of operating it at scale and repeating their success, and are considering a Converged Infrastructure consumption model as well. Funny how it can come full circle, but it is time for them to blaze the trail ahead in some other interesting area! With these parameters in place, IT can focus their strategic efforts elsewhere – like exploring cool PaaS technologies, containers, or developing new applications. Ultimately, the trend towards standardization is beneficial to IT operations across all forms of infrastructure when it comes to deploying and managing systems at scale.  Faster time-to-value, reduced risk, and lower TCO will always be of value - and now it is OpenStack’s turn.