As OpenStack Integrators, we often have discussions with customers regarding interoperability of VMware and KVM virtualization on daily basis. We usually answer questions like:

Today I would like to try answers regarding networking on hybrid hypervisor environment. Vanilla Neutron implementation using openVSwitch cannot be used with VMware infrastructure. Only Nova vCenter driver (ESXi driver deprecated in Icehouse release) for compute exists, Cinder VMDK driver for volumes. For the networking virtualization only Nova flat networks can be used. Of course, there is an effort to provide at least Neutron VLAN driver, but the development is done outside the OpenStack community. The reason is that VMware forces customer to buy its SDN solution VMware NSX and use Neutron NSX plugin. This is not open source solution and it is very hard to get it for testing. Therefore the only way how to get the SDN features and stay in open source world (with the possibility of commercial support) is OpenContrail, which introduces the VMware ESXi support in new release 2.0.

This first implementation has limited capability of Contrail compute node functionality at hypervisors running the VMware ESXi virtualization platform. Next releases will provide vCenter driver with Live Migration, DRS, and other VMware functions. Currently Contrail supports only the standard VMware vSwitches and port groups in ESXi. Distributed vSwitch functionality will be supported by the vCenter plugin too. Today the most important thing is to verify functions and measure real performance.

The Contrail compute virtual machine can be downloaded as VMDK from Juniper website. Contrail ESXi VM for Ubuntu 12.04.3 LTS is a standard ubuntu image with few modifications: 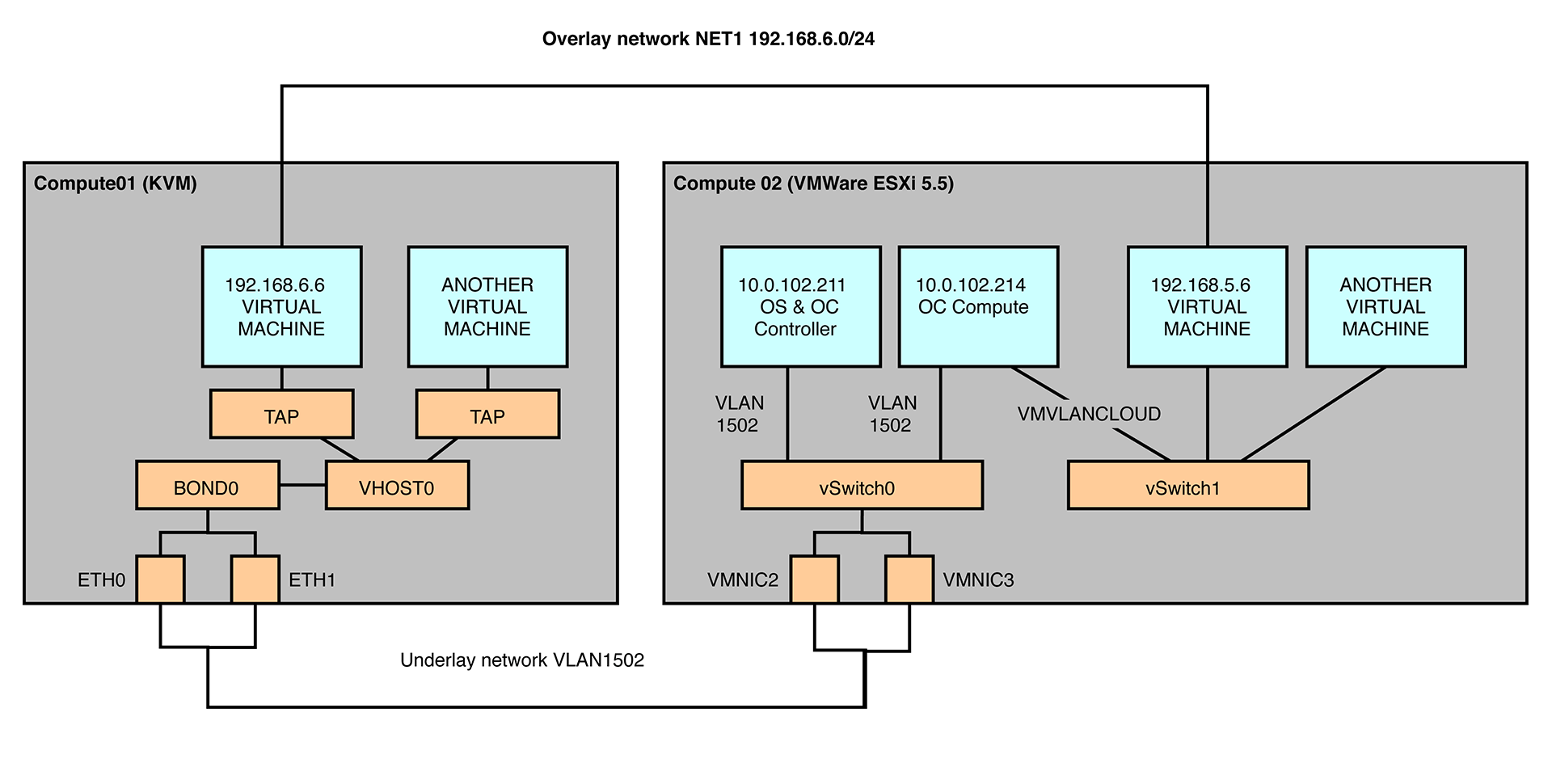 We use the MPLSoverGRE for overlay encapsulation. 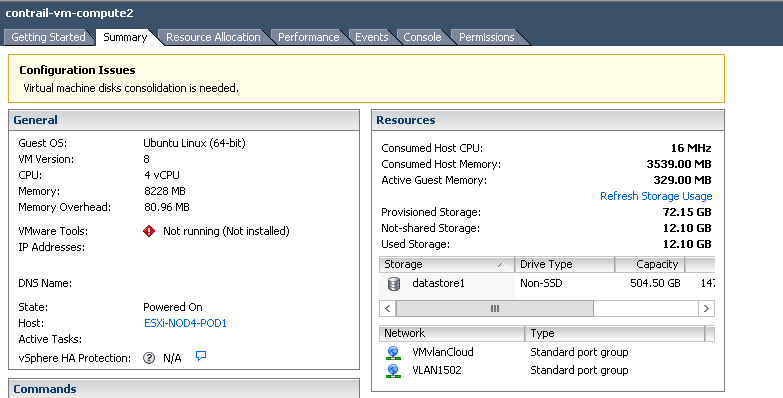 Following screens show newly created vSwitches and Port Groups. We use ESXi for other purposes as well, so there are more Port Groups. 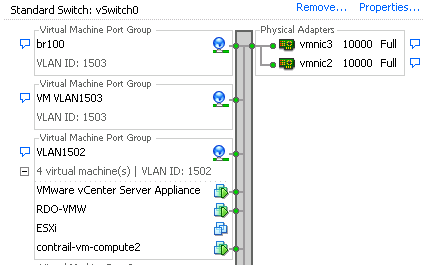 After installation vSwitch1 contains only one contrail-compute-vm. This screen was captured after instances were provisioned. 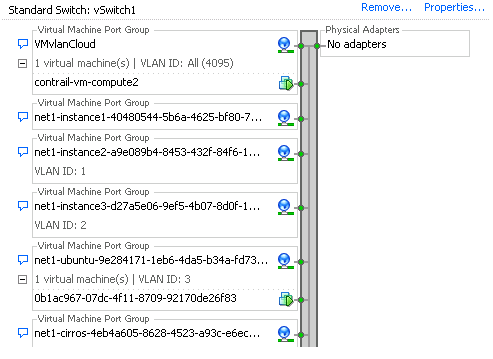 Now we can start with actual performance testing the newly deployed hybrid infrastructure.

Nova service status can be verified through the command nova-manage service list.

We provisioned 4 instances together, 2 at each hypervisor. 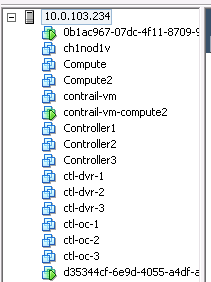 This screen shows that standard OpenStack user cannot see any difference between instances running ESXi or KVM virtualization. We are able to ping virtual machines running on different hypervisors, that are connected to the same overlay network.

Following images show the routes at both vRouters in OpenContrail dashboard.

Routes at the ESXi hypervisor: 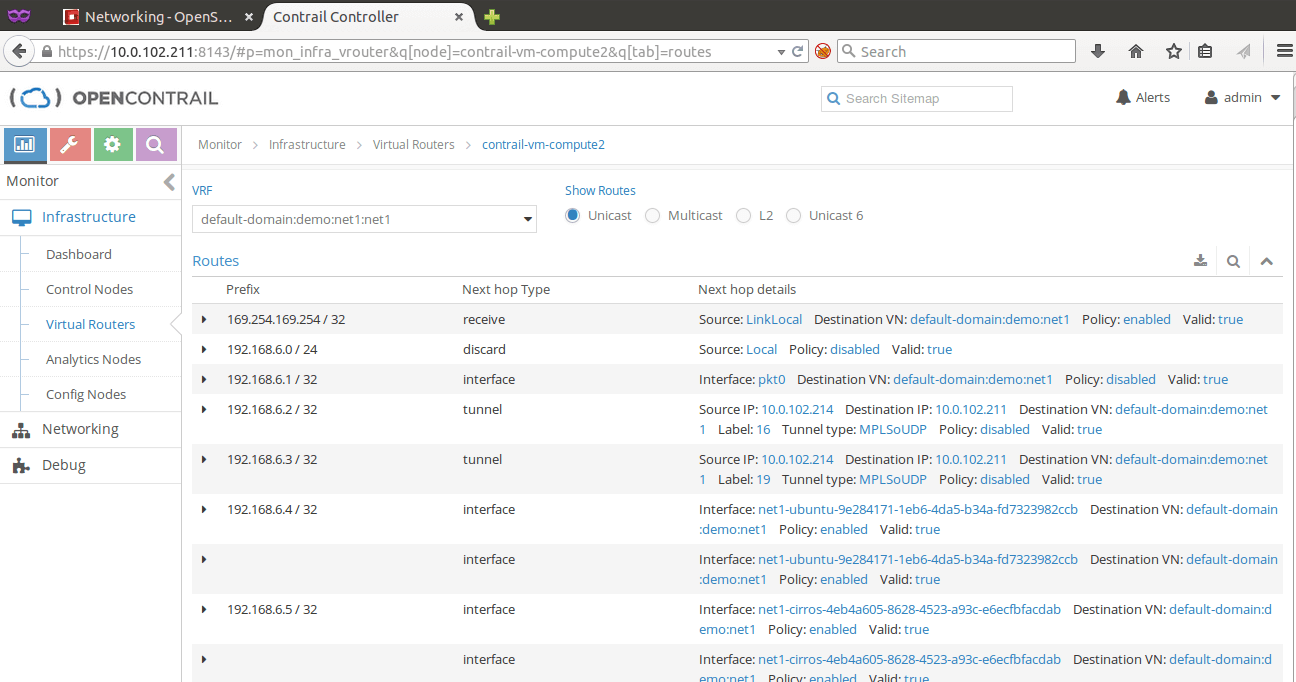 Routes at the KVM hypervisor: 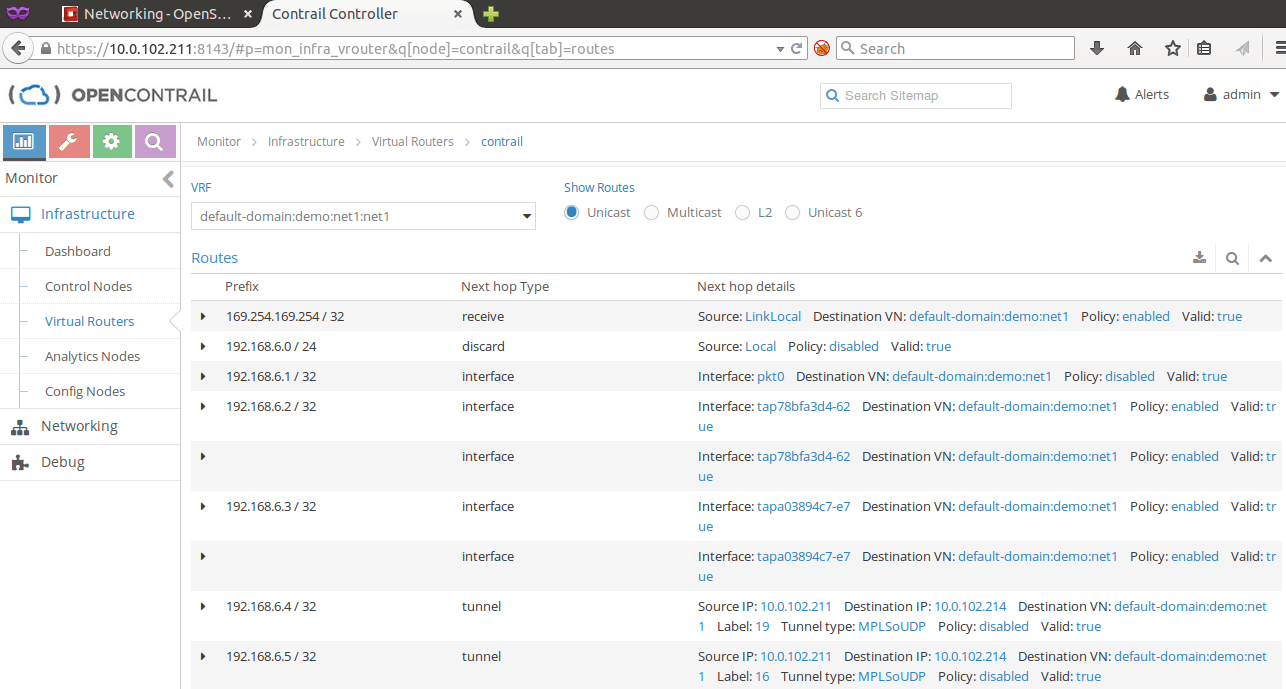 The most important and interesting part is the performance throughput measurements between VMware ESXi and KVM hypervisors. The amazing near the line bandwidth (9.6Gbit at 10Gbps links) of OpenContrail is well known, but how fast is the VMware contrail-compute-vm? We decided to use iperf for the network testing. Iperf is a tool to measure maximal TCP bandwidth, allowing the tuning of various TCP/UDP parameters and characteristics. Iperf reports bandwidth, delay jitter, datagram loss and other useful information.

The first measurement is one session from centoskvm to ubuntuesxi.

As you can see form screenshot, the network throughput was 3.03Gbits/sec without any special performance tuning.

3.The next test launches 5 parallel sessions in dual testing mode for 30 seconds. 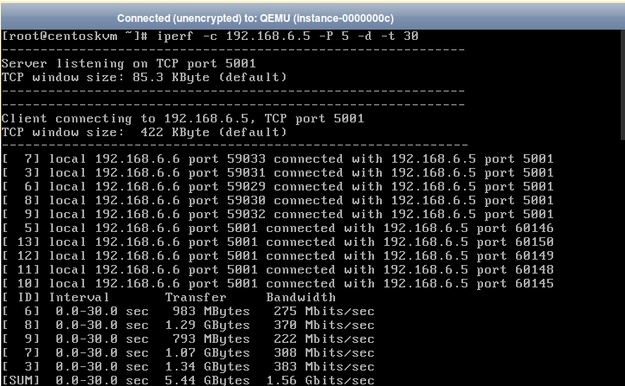 You can see that the maximum bandwidth reached is about 3Gbits/sec.

We proved that hybrid hypervisor environment is possible to build and it enables quite good performance out of box. The bandwidth of 3Gbits/sec is similar to what other SDN solutions like VMware NSX or PlumGrid can achieve. These solutions also use virtual machines as gateways (south-nord traffic) for OpenStack Neutron.

Future release will support vCenter with advanced VMware features and possibility to integrate it with ToR OVSDB switches through VXLAN encapsulation. At that case there will be no need to have dedicated service virtual machine at each ESXi.