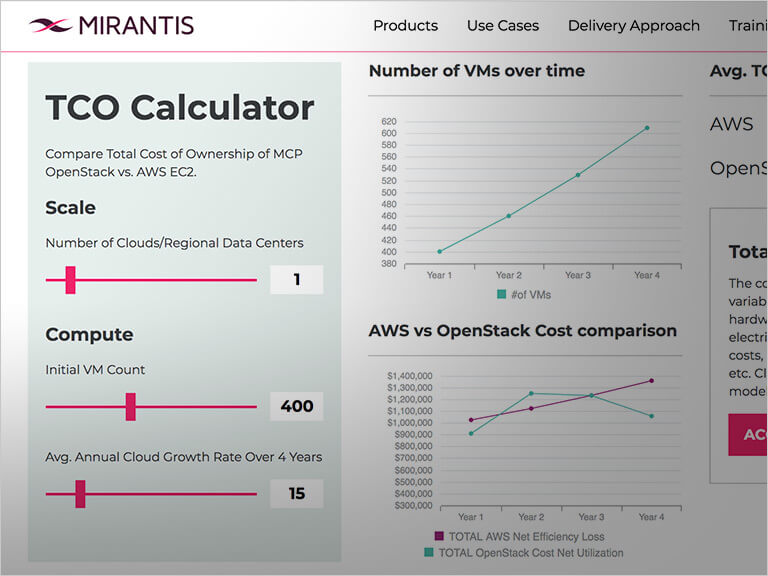 It’s easy to think that the least expensive way to spin up cloud servers is to use a service such as Amazon Web Services. After all, you don’t need to buy hardware or electricity, or even hire people to manage it, right?  Well … not so fast. It’s not as simple as that. While there are lots of situations in which AWS is the least expensive, there are times when it’s less costly to bring your workloads on-prem with an OpenStack deployment.

Here at Mirantis, we’ve created a Total Cost of Ownership calculator that compares the two.  For example, if you have 300 virtual machines, AWS can be more cost-effective, but once you get to 400, OpenStack is the way to go.  But before relying on any TCO calculator, it’s important to know the assumptions behind it so that you can understand how those determinations are made.

In this article, we’ll explain how the TCO calculator comes to its conclusions, and you can feel free to download the full spreadsheet yourself to take a look at how it all fits together.

In our case, we’re making the following general assumptions:

It’s important to understand that whether you run in the private cloud/on-prem or in the public cloud, there is going to be some level of inefficiency.  For example, we’re assuming that at any given time, only 60% of your OpenStack cloud hardware is in use, but because it’s private cloud/on-premise, you’re still paying for it.

You don’t have this problem with AWS, because you can always just stop instances you’re not using, but that doesn’t mean you will always run at 100% efficiency. The TCO calculator assumes 80% efficiency for AWS instances, taking into account that there will be times instances are simply too big for the workloads running on them (but you still pay full price for the VM).

Staffing may not seem like an issue common to both on- and off-prem clouds, but it is.

For AWS, you’ll still need at least one AWS internal administrator to support users who are in the cloud.

We’re assuming a full-time admin costs $140,000/year. Now let’s look at some assumptions that are specific to each platform.

Let’s start with OpenStack.  If you’re running an on-prem OpenStack cloud, you’ll have expenses that won’t exist for the public cloud, such as hardware and electricity.

The TCO calculator assumes that each physical server consists of:

For storage we’re assuming each server consists of the following:

We’re also assuming a 30% discount off hardware list prices. We’ll depreciate the hardware over 3 years, and assume it needs to be replaced after 4 years.

We also need to take into consideration a number of other factors, including:

Similarly, there are costs that are specific to an AWS implementation. Some, such as Enterprise Support, have corresponding costs on the OpenStack side.  Others, such as cost differentials for reserved instances, are specific to AWS. The TOC calculator assumes the following:

OK, so what does the TCO analysis tell us?  Which is a better choice from a financial standpoint? As with so many things, it depends on your situation.  For example, AWS is generally less expensive if you need multiple data centers — unless you have a large number of VMs, in which case OpenStack is less expensive. So do yourself a favor and plug your information into the TCO calculator and find out. Please let us know what you find!