Rally is a benchmarking tool that tells you how OpenStack performs, especially under load at scale. You can use it to validate, performance test, and benchmark your OpenStack deployment using various pluggable Rally benchmark scenarios. In this fourth installment of a series, we take a look at Rally as the basis for a performance dashboard, showing you how to easily create  graphical test results, including pie charts, performance charts, and histograms so you can create reports that are easy to understand, with information that viewers can quickly digest.

In the first three articles of the series we covered:

If you’re not familiar with Rally, take a look for more background, then continue here to see how it graphically exhibits the output from simple verification runs, as well as concurrency testing. These reports enable you to easily see issues at integration points and with load testing using Rally’s visual displays.

Unlike a traditional table, the Rally dashboard has an easy-to-read user interface displayed in Figure 1 that shows a graphical snapshot of a process’s key performance indicators, enabling you to make instantaneous and informed decisions. 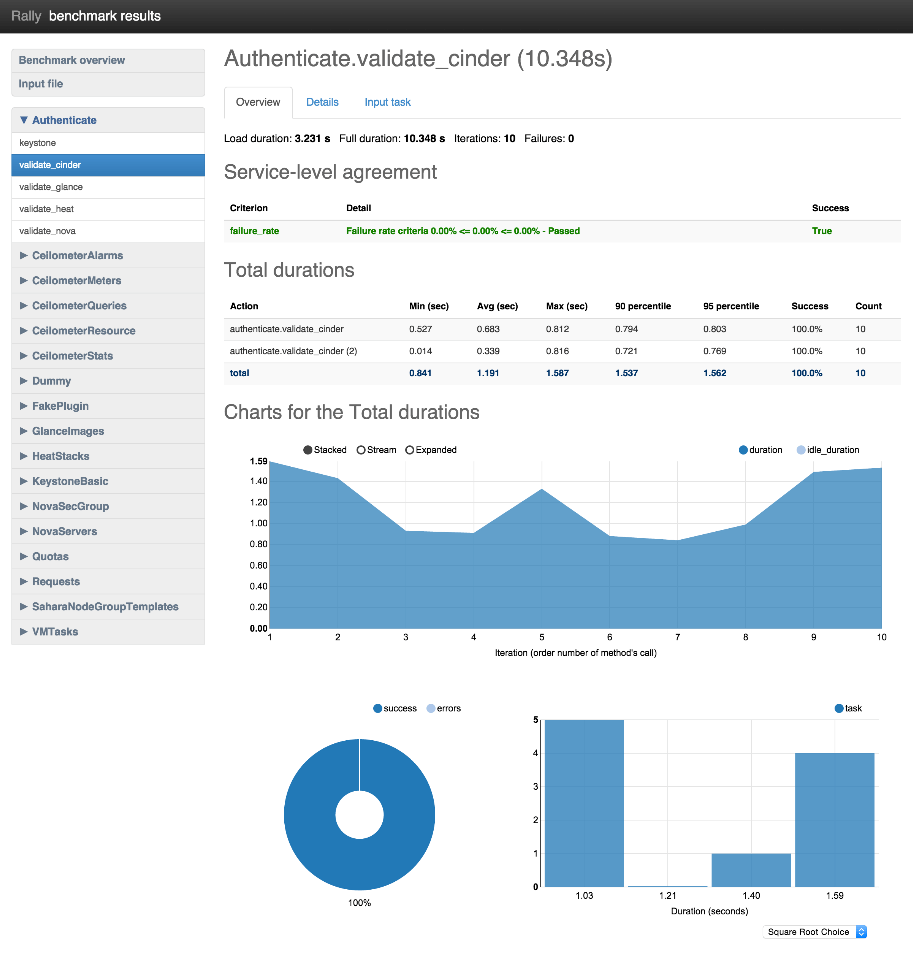 Figure 1 – Rally benchmark results in both tabular and graphic displays

As you can see in Figure 1:

The Rally results show how you can use a performance dashboard to transform under-performing data into information that you can use to guide operational improvements of your cloud. You can focus on key areas of improvement with Rally’s detection of OpenStack performance bugs.

Tempest is an OpenStack integration test suite that provides an ordinary table with few details. It doesn’t actually provide HTML reports out of the box, but Rally can take your Tempest output and at least make it more readable, as you can see in Figure 2. 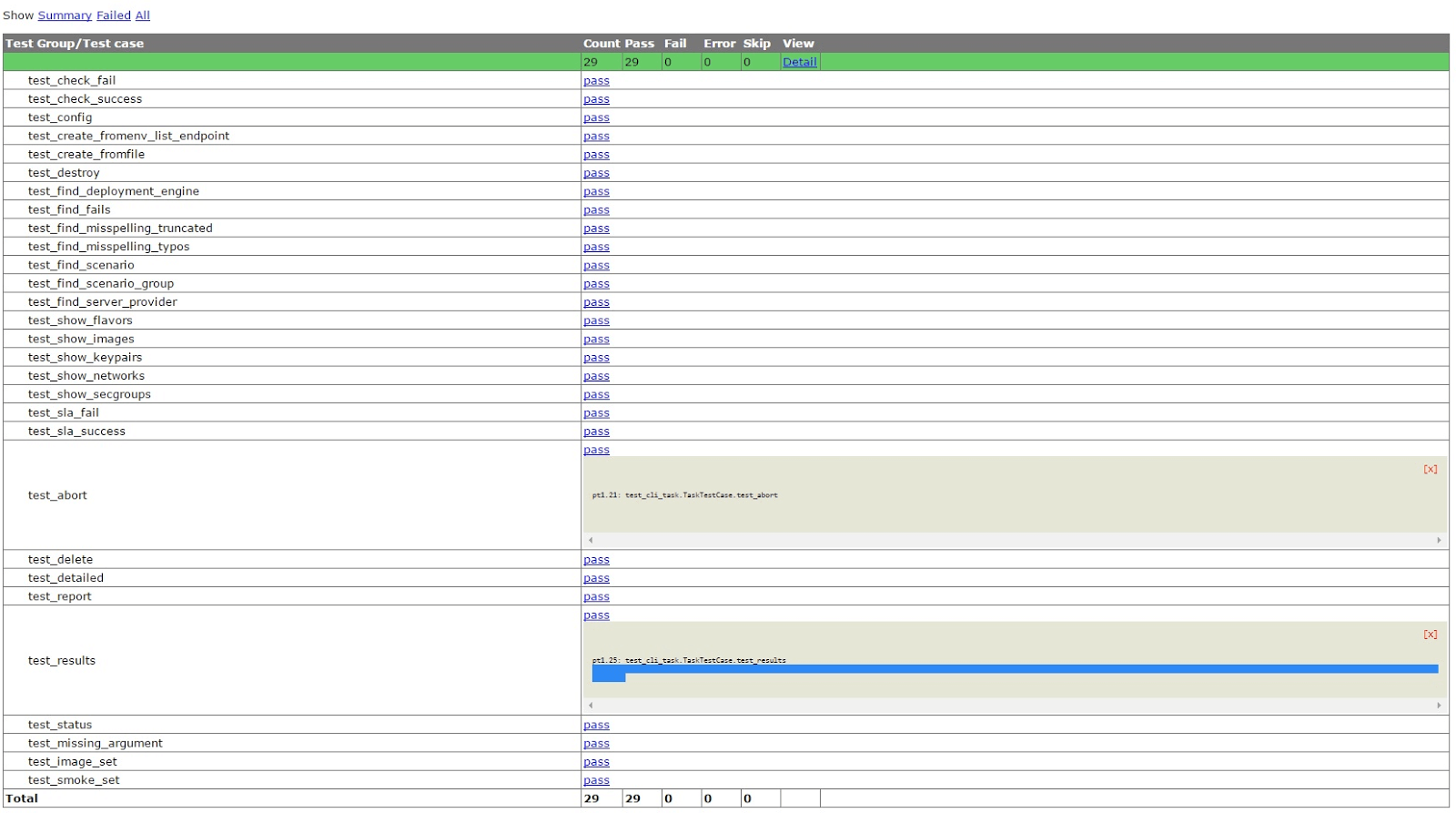 Now let’s look at initiating these reports from Rally.

To start a benchmark test like the one in figure 1, pass its configuration to the “rally task start” command. (You can find instructions here or here.) When it’s complete, call a “rally task report” to display a specific task as follows:

Rally is in the process of incorporating benchmarks for all OpenStack-related projects, which is the goal of the Big Tent initiative. In fact, Rally has been the first real adopter of the Big Tent restructurization, breaking the borders between incubated, non-incubated, and integrated projects.  For example, Rally now supports testing for Zaqar and Designate, as well as the StackForge project Mistral.

What you can visualize with Rally

With benchmarking tests performed, let’s start from the beginning to read the output, using Keystone authentication as an example. In the Rally interface as shown in Figure 1, we click “validate_cinder” under “Authenticate.” The resulting report has three tabs:

Let’s take a look at the structure of the report for each of these three tabs, starting with the Overview.

The Overview tab, as seen in Figure 3, displays general information about the scenario, including: 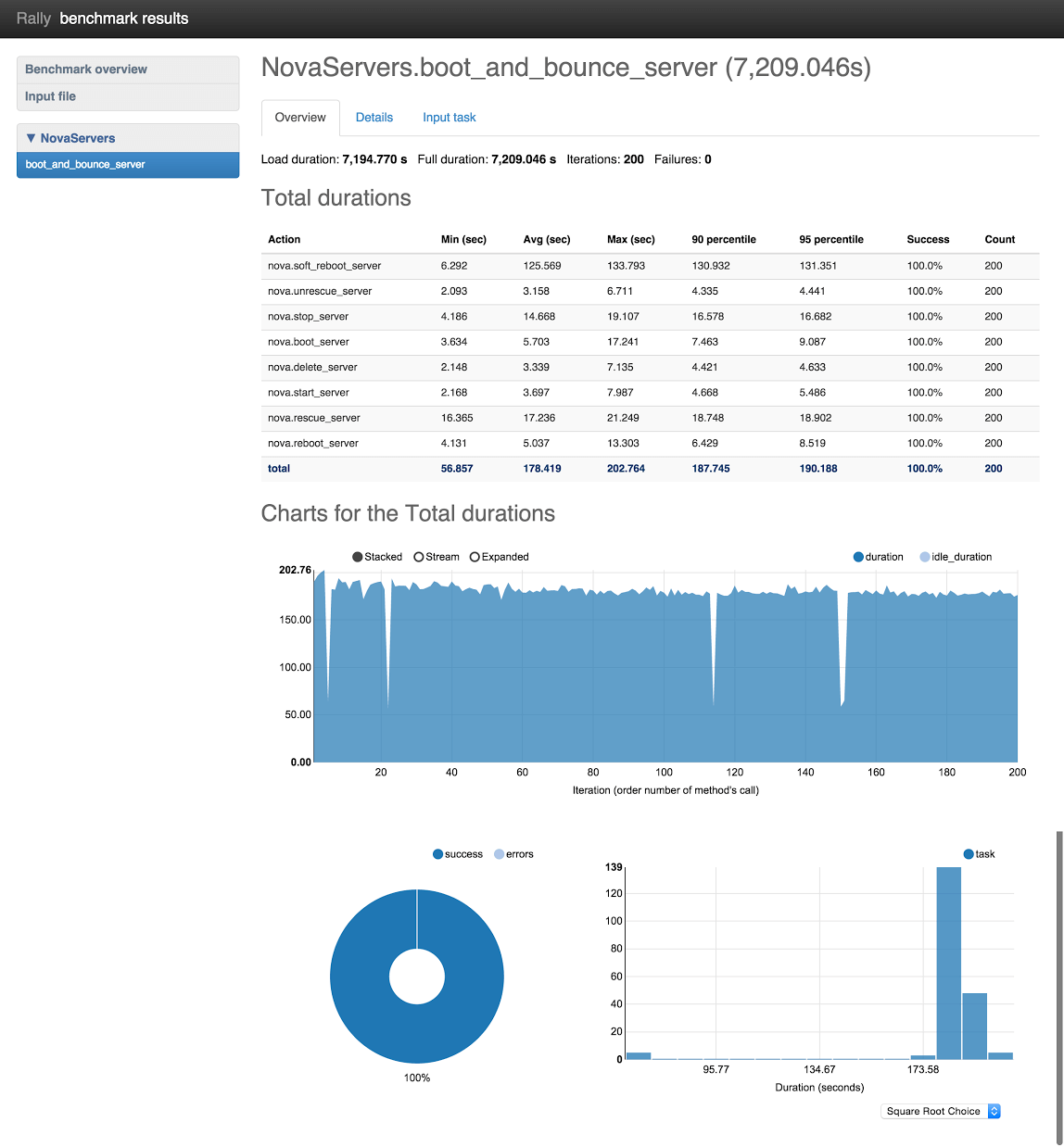 The Total durations results output at the top of Figure 3 display the statistics of atomic operations at the 90 and 95 percentile. In the figure above, that includes booting the VM, performing a set of actions on it, and deleting it. A 95-percentile is the lowest duration value, meaning that  95% of benchmark scenario/atomic action iterations took time less than this value. If success is not equal to 100%, some iterations have failed.

In the Charts for the Total durations graphic, you can look through the results with or without idle duration. Idle duration is all idle time while executing the scenario method, such as:

These charts are useful to pinpoint bugs related to scaling. Usually the desired outcome for the pie chart is to be a solid color, indicating 100% success. However, the definition of “success” is actually configurable; you may want to write negative tests, which means that in a properly working system, the scenario must fail. For example, you may want to test the API rate limit.  In these cases, a successful outcome will include a graphic that accurately displays less than 100% success. 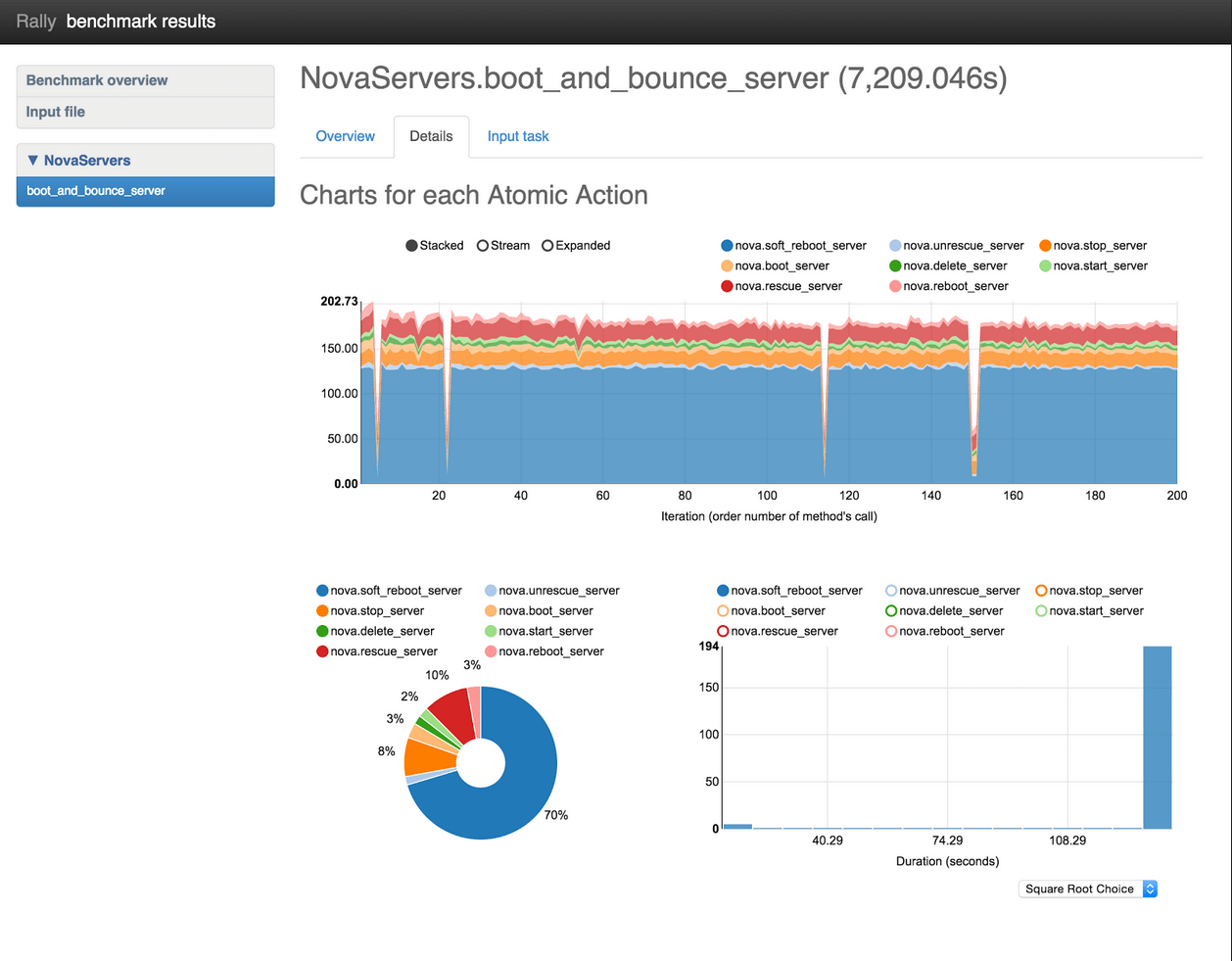 The Details tab shows the following charts, as shown in Figure 4:

The Input task tab displays the scenario configuration and the atomic actions it must complete. Let’s take a look at graphics from the actions NovaServers.boot_and_bounce_server: 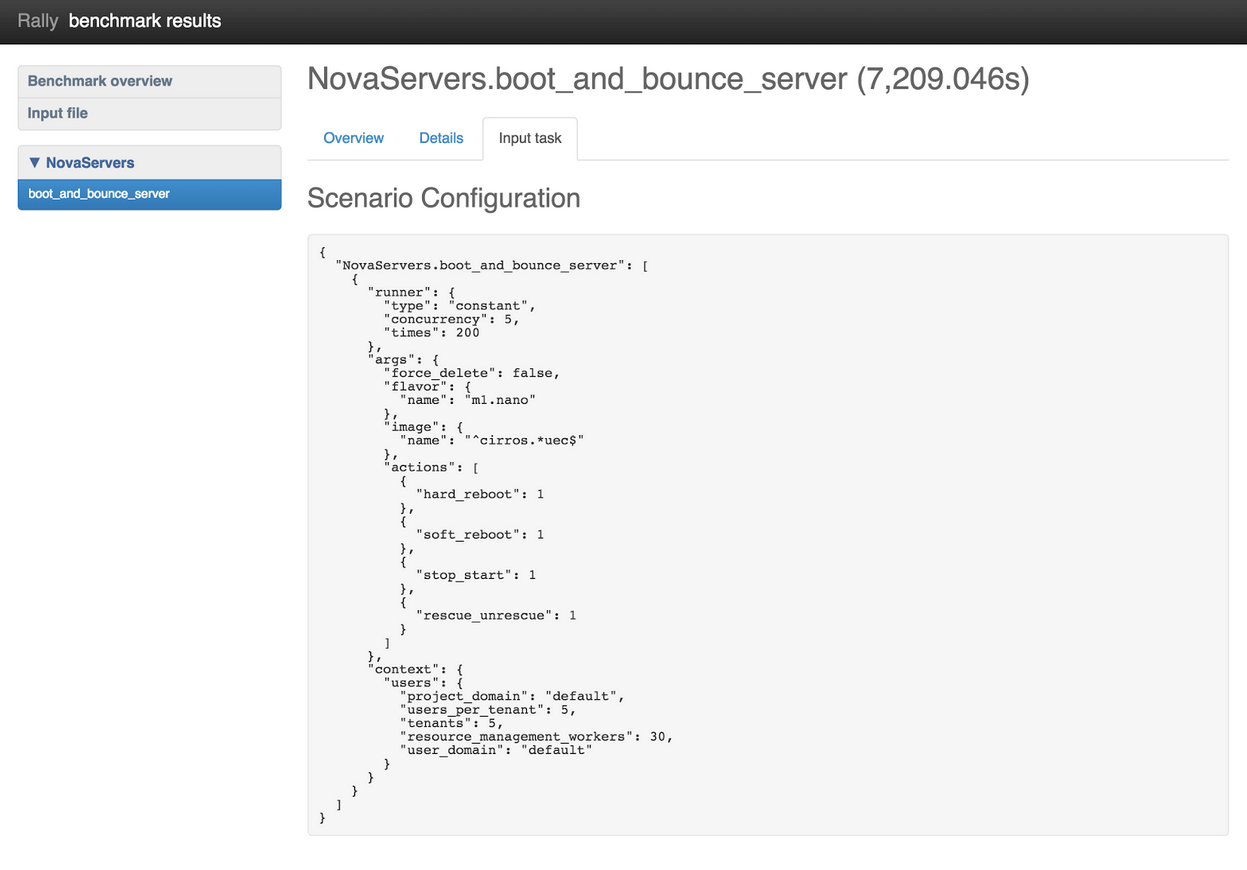 All input files in a scenario configuration have a similar structure. ScenarioClass.scenario_method is the full name of the benchmark scenario, which in Figure 5 is “NovaServers.boot_and_bounce_server”.  It consists of the following:

Still to come in Rally

In addition to “Overview,” “Details,” and “Input task,” our developers have created a “Failures” tab in a new patch set to Rally, which displays failures that occur during benchmark testing.

As shown in Figure 6, Failures will deliver a table with information about all failed interactions, including order number, exception type, and exception message. When it becomes available, you’ll also be able to click on a row to display a full trace of the exception. 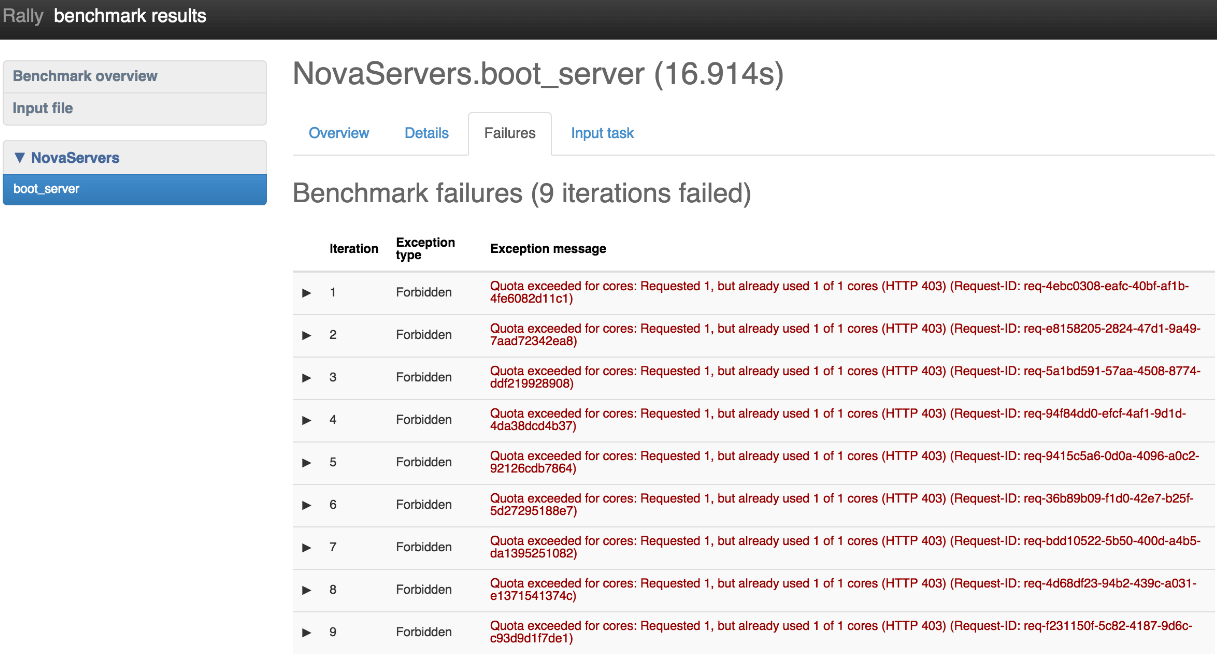 With its full range of features and graphic reports, Rally can help you easily pinpoint where you need to modify your cloud deployment for best performance. In test clouds and clouds already in operation, you get visual breakdowns that can help you diagnose problems at integration points and under load testing.

And of course development continues, as Rally is a community project.  For example, Solinea presented this helpful video about Rally at the Paris Summit. We’d like to know how you use Rally, and what you’d like to see it do next.  Let us know in the comments what you think is important.
FREE EBOOK!
Service Mesh for Mere Mortals
DOWNLOAD
LIVE WEBINAR
Cloud Native & Coffee: Porting apps from legacy systems to cloud. Is it worth it
SAVE SEAT
LIVE WEBINAR
Docker Swarm is Dead! Long Live Docker Swarm
SAVE SEAT
LIVE WEBINAR
Defining a Kubernetes that just works, anywhere
SAVE SEAT
Mirantis Webstore
Purchase Kubernetes support
SHOP NOW
Technical training
Learn Kubernetes & OpenStack from Deployment Experts
View schedule