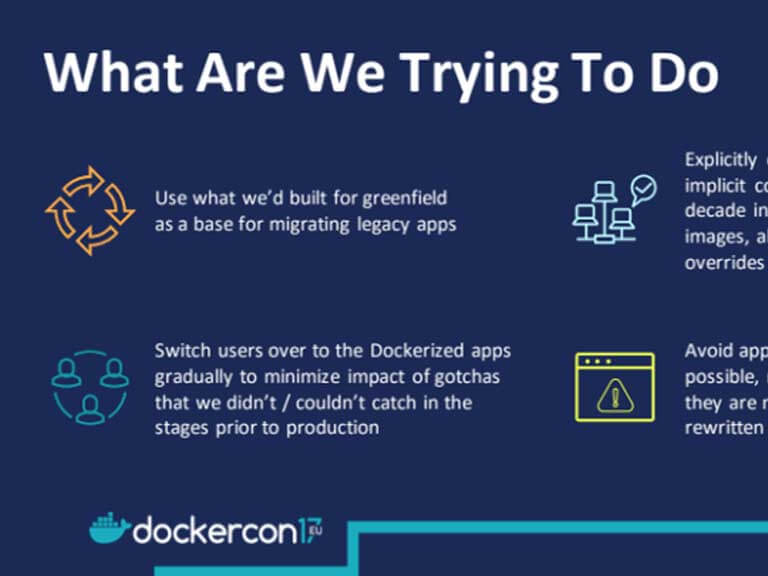 Founded in 1792, Alm. Brand is a Danish insurance and banking company headquartered in Copenhagen, Denmark and one of the oldest companies to have ever presented at any DockerCon. Sune Keller, an IT architect, and Loke Johannessen, Systems Specialist, rode their bikes to DockerCon Europe 2017 to demonstrate how they helped lift and shift their legacy WebLogic applications to Docker Enterprise. You can watch their entire talk here:

Alm. Brand started working with Docker Enterprise after hearing about it at DockerCon 2015 (known as Docker Datacenter back then). After successfully deploying the first set of new greenfield apps in their Docker Enterprise environment, Alm. Brand wanted to tackle their existing WebLogic applications, which were causing the operations team the biggest headaches. The team operated the WebLogic applications in a large cluster, all running on the same JVM. When an app crashed, it would often crash the entire JVM or hang the entire cluster, making it hard to identify which application was the root cause. The setup was also very brittle and slow, as they could only deploy one app at a time to the cluster. 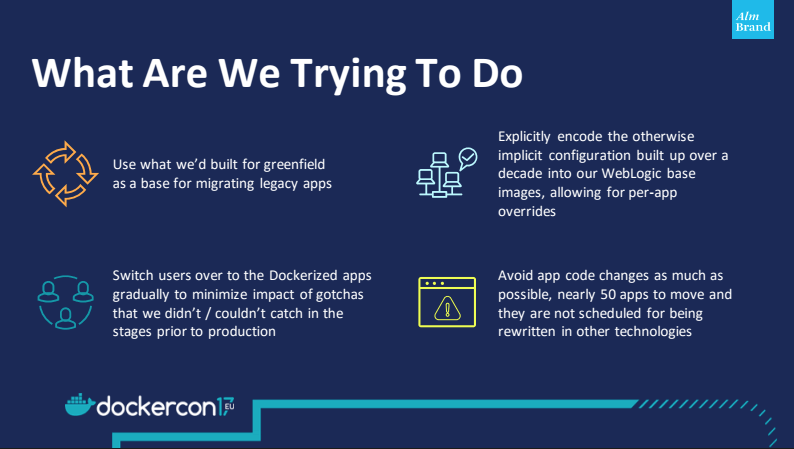 With the skills and knowledge they picked up getting their first batch of stateless, greenfield applications running in Docker Enterprise, Sune and Loke set some ambitious goals for migrating the legacy WebLogic applications. They set out to switch over from their existing cluster to Docker EE during work hours without changing code and with minimal impact to their users.

Today, Alm. Brand has migrated 39 WebLogic applications to their Docker Enterprise environment to go along with almost 50 new greenfield apps. They were able to execute the migrations with minimal disruption by load balancing applications between the legacy cluster and the new Docker cluster, gradually transitioning traffic from one cluster to the other without disrupting users. Sune and Loke demonstrated this process in their talk and it’s worth checking out! 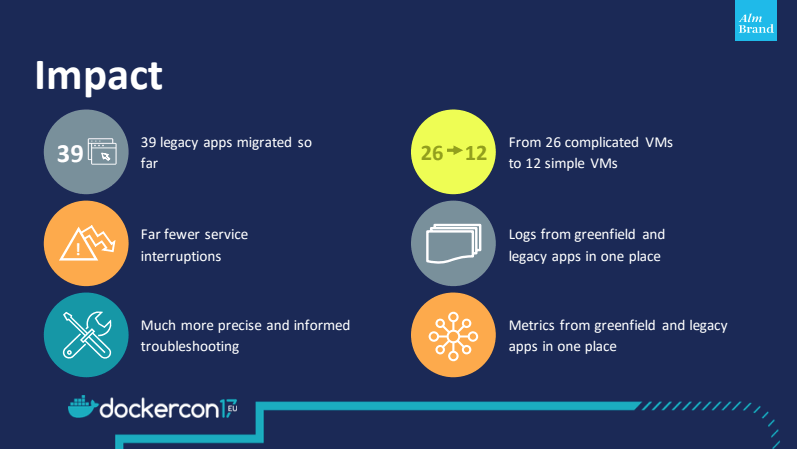 The impact of this migration has been great for the operations team for a number of reasons:

Sune and Loke have about 10 more WebLogic applications to finish migrating and then they are going to start looking at their Windows app portfolio. They’re already leveraging the basic access controls and LDAP integration capabilities of Docker Enterprise and are now also exploring some of the other advanced capabilities, such as node-based isolation for separation between production and non-production environments.

This blog was originally published on November 24, 2017 on the Docker blog.