What is this Keystone anyway?

The simplest way to authenticate a user is to ask for credentials (login+password, login+keys, etc.) and check them over some database. But when it comes to lots of separate services as it is in the OpenStack world, we have to rethink that. The main problem is an inability to use one user entity to be authorized everywhere. For example, a user expects Nova to get one's credentials and create or fetch some images in Glance or set up networks in Quantum. This cannot be done without a central authentication and authorization system.
So now we have one more OpenStack project - Keystone. It is intended to incorporate all common information about users and their capabilities across other services, along with a list of these services themselves. We have spent some time explaining to our friends what, why, and how it is and now we decided to blog about it. What follows is an explanation of every entity that drives Keystone’s life. Of course, this explanation can become outdated in no time since the Keystone project is very young and it has developed very fast.
The first basis is the user. Users are users; they represent someone or something that can gain access through Keystone. Users come with credentials that can be checked like passwords or API keys.
The second one is tenant. It represents what is called the project in Nova, meaning something that aggregates the number of resources in each service. For example, a tenant can have some machines in Nova, a number of images in Swift/Glance, and couple of networks in Quantum. Users are always bound to some tenant by default.
The third and last authorization-related kinds of objects are roles. They represent a group of users that is assumed to have some access to resources, e.g. some VMs in Nova and a number of images in Glance. Users can be added to any role either globally or in a tenant. In the first case, the user gains access implied by the role to the resources in all tenants; in the second case, one's access is limited to resources of the corresponding tenant. For example, the user can be an operator of all tenants and an admin of his own playground.
Now let’s talk about service discovery capabilities. With the first three primitives, any service (Nova, Glance, Swift) can check whether or not the user has access to resources. But to try to access some service in the tenant, the user has to know that the service exists and to find a way to access it. So the basic objects here are services. They are actually just some distinguished names. The roles we've talked about recently can be not only general but also bound to a service. For example, when Swift requires administrator access to create some object, it should not require the user to have administrator access to Nova too. To achieve that, we should create two separate Admin roles - one bound to Swift and another bound to Nova. After that admin access to Swift can be given to user with no impact on Nova and vice versa.
To access a service, we have to know its endpoint. So there are endpoint templates in Keystone that provide information about all existing endpoints of all existing services. One endpoint template provides a list of URLs to access an instance of service. These URLs are public, private and admin ones. The public one is intended to be accessible from the global world (like http://compute.example.com), the private one can be used to access from a local network (like http://compute.example.local), and the admin one is used in case admin access to service is separated from the common access (like it is in Keystone).
Now we have the global list of services that exist in our farm and we can bind tenants to them. Every tenant can have its own list of service instances and this binding entity is named the endpoint, which “plugs” the tenant to one service instance. It makes it possible, for example, to have two tenants that share a common image store but use distinct compute servers.
This is a long list of entities that are involved in the process but how does it actually work?

All the way this token travels between services so that they can ask Keystone or each other for additional information or some actions.Here is a rough diagram of this process: 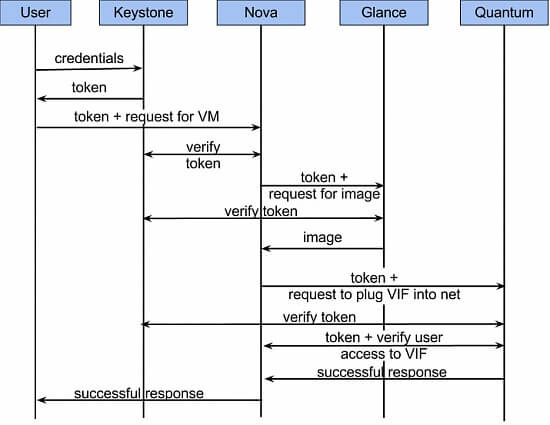