[NOTE:  This article is an excerpt from Understanding OPNFV, by Amar Kapadia. You can also download an ebook version of the book here.] The entire OPNFV stack, ultimately, serves one purpose: to run virtual network functions (VNFs) that in turn constitute network services. We will look at two major considerations: how to write VNFs, and how to onboard them. We’ll conclude by analyzing how a vIMS VNF, Clearwater, has been onboarded by OPNFV.

We looked at three types of VNF architectures in Chapter 2: cloud hosted, cloud optimized, and cloud native. As a VNF creator or a buyer, your first consideration is to pick the architecture. Physical network functions that are simply converted into a VNF without any optimizations are likely to be cloud hosted. Cloud hosted applications are monolithic and generally stateful. These VNFs require a large team that may or may not be using an agile development methodology. These applications are also dependent on the underlying infrastructure to provide high availability, and typically cannot be scaled out or in. In some cases, these VNFs may also need manual configuration. Some developers refactor cloud hosted VNFs to make them more cloud friendly, or "cloud optimized". A non-disruptive way to approach this effort is to take easily separable aspects of the monolithic application and convert them into services accessible via REST APIs. The VNF state may then be moved to a dedicated service, so the rest of the app becomes stateless. Making these changes allows for greater velocity in software development and the ability to perform cloud-centric operations such as scale-out, scale-in and self-healing. While converting an existing VNF to be fully cloud native may be overly burdensome, all new VNFs should be written exclusively as cloud native if possible. (We have already covered cloud native application patterns in Chapter 2.) By using a cloud native architecture, developers and users can get much higher velocity in innovation and a high degree of flexibility in VNF orchestration and lifecycle management. In an enterprise end-user study conducted by Mirantis and Intel, the move to cloud native programming showed an average increase of iterations/year from 6 to 24 (4x increase) and a typical increase in the number of user stories/iteration of 20-60%. Enterprise cloud native apps are not the same as cloud native VNFs, but these benefits should generally apply to NFV as well. Ultimately, there is no right or wrong architecture choice for existing VNFs (new VNFs should be designed as cloud native). The chart below shows VNF app architecture trade-offs. 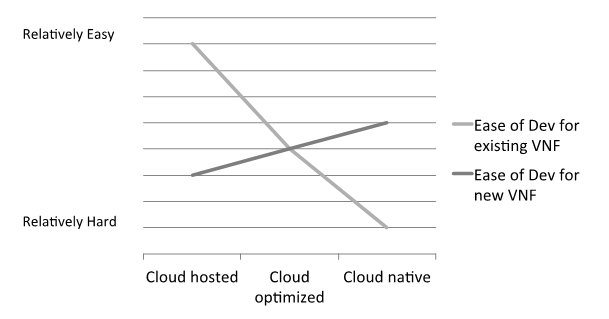 The next major topic to consider when integrating VNFs into OPNFV scenarios is VNF onboarding. A VNF by itself is not very useful; the MANO layer needs associated metadata and descriptors to manage these VNFs. The VNF Package, which includes the VNF Descriptor (VNFD), describes what the VNF requires, how to configure the VNF, and how to manage its lifecycle. Along with this information, the VNF onboarding process may be viewed in four steps.

A detailed discussion of these steps is out of scope for this book and instead we will focus on the VNF package. For successful VNF onboarding, the following types of attributes need to be specified in the VNF package. This list is by no means comprehensive; it is meant to be a sample. The package may include: Currently, the industry lacks standards in the areas of VNF packaging and descriptors. Each MANO vendor or MANO project and each NFV vendor has its own format. By the time, you add VIM-specific considerations, you get an unmanageably large development and interop matrix. It could easily take months of manual work for a user to onboard VNFs to their specific MANO+VIM choice because the formats have to be adapted and then tested. Both users and VNF providers find this process less than ideal. Both sides are always wondering which models to support, and what components to proactively test against. The VNF manager (VNFM) might further complicate the situation. For simple VNFs, a generic VNFM might be adequate. For more complex VNFs such as VoLTE (voice over LTE), a custom (read: proprietary) VNFM might be needed, and would be provided by the VNF vendor. Needless to say, the already complex interop matrix becomes even more complex in this case. In addition to manual work and wasted time, there are other issues exposed by the lack of standards. For example, there is no way for a VNF to be sure it will be provided resources that match its requirements. There may also be gaps in security, isolation, scaling, self-healing and other lifecycle management phases. OPNFV recognizes the importance of standardizing the VNF onboarding process. The MANO working group, along with the Models project (see Chapter 5) is working on standardizing VNF onboarding for OPNFV. The projects address multiple issues including VNF package development, VNF package import, VNF validation/testing (basic and in-service), VNF import into a catalog, service blueprint creation, and VNFD models. The three main modeling languages being considered are: UML, TOSCA-NFV simple profile, and YANG: OPNFV is considering all three approaches, and in some cases hybrid approaches with multiple modeling languages, to solve the VNF onboarding problem. Given the importance of this issue, there is also considerable collaboration with outside organizations and projects such as ETSI, TMForum, OASIS, ON.Lab, and so on.

Clearwater is a virtual IP multimedia system (vIMS) software VNF project, open-sourced by Metaswitch. It is a complex cloud native application with a number of interconnected virtual instances. 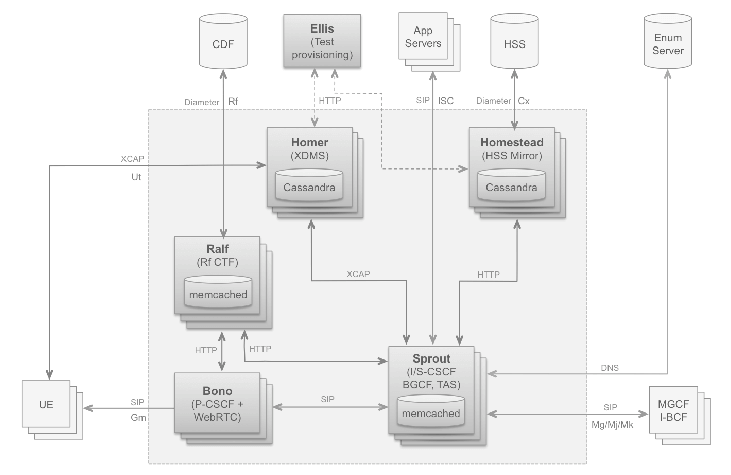 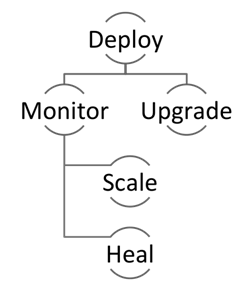 The TOSCA code fragment below shows a scale up policy based on a threshold, that then triggers a workflow to scale up Sprout SIP router instances from the initial 1 to a maximum of 5. TOSCA Scaleup Policy and Workflow for Sprout SIP

Initial Deployment of the Clearwater VNF 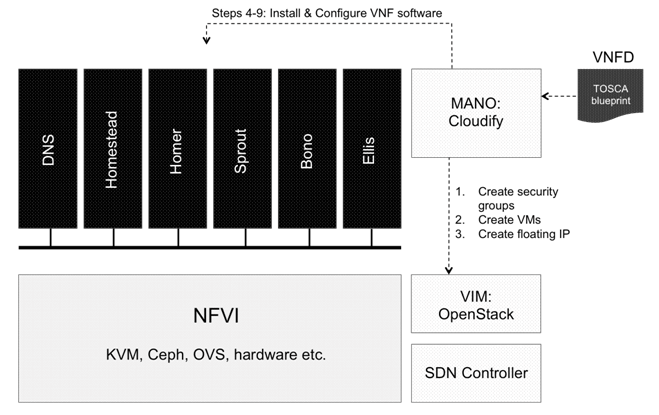 Once the blueprint is complete, an orchestrator needs to interpret and act upon the TOSCA blueprint. For purposes of testing Clearwater, OPNFV uses Cloudify, a MANO product from Gigaspaces available in both commercial and open source flavors. Cloudify orchestrates each of the workflows described in the above blueprint. Specifically, the workflow to deploy the VNF looks like this: Running this entire series of steps in an automated fashion in Functest requires the following: Step 1: Deploy VIM, SDN controller, NFVI Step 2: Deploy the MANO software (could be Heat, Open-O or Cloudify, which is the current choice). For testing purposes, it is possible to use the full MANO stack (NFVO + VNFM) or just the VNFM. Step 3: Test the VNF. For project Clearwater, Functest runs more than 100 default signaling tests covering most vIMS test cases (calls, registration, redirection, busy, and so on). We have talked about a specific VNF, but this approach is pragmatic enough to be applied to other VNFs – open source or proprietary. Using OPNFV as a standard way to onboard VNFs brings great value to the industry because of the complexity of the VNF onboarding landscape. No one vendor or user has the resources or time to perform testing against a full interop matrix. But as a community, this is eminently possible. At this point, it is worth taking a bit of a detour to illustrate the power of open source. The initial project Clearwater testing work was done by an intern at Orange. The work became quite popular, and has been adopted by numerous vendors, influenced the OPNFV MANO working group, and even convinced some operators to use OPNFV as a VNF onboarding vehicle. In summary, we saw how VNFs can target different application architectures, what is involved in onboarding VNFs, and a concrete example of how the Clearwater vIMS VNF has been onboarded by OPNFV for testing purposes. In the next chapter, we will discuss how you can benefit from and get involved with the OPNFV project. [NOTE:  This article is an excerpt from Understanding OPNFV, by Amar Kapadia. You can also download an ebook version of the book here.]