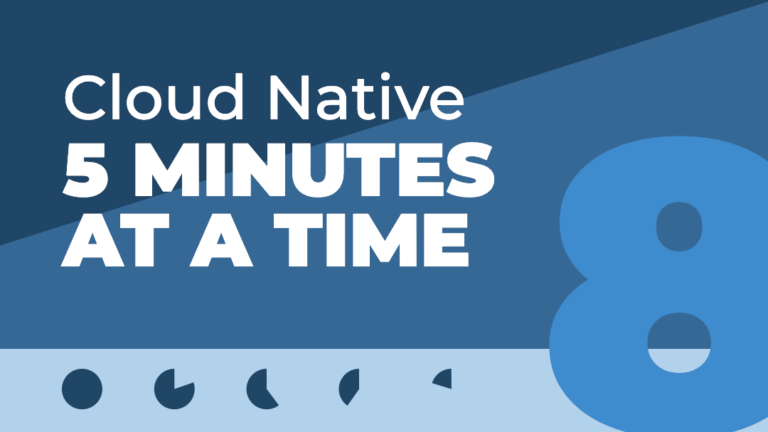 Last time, we ran a web app–the open source wiki platform Mediawiki–from a container in a single-container configuration, with a persistent volume and a container port published to the host machine. That gave us a functional development environment, from which we could modify and build on the application.

But cloud native deployments often consist of applications spread across multiple containers. How can we connect the constituent parts of a single application once they’ve been containerized? In this tutorial, we’ll learn how to let containers talk to one another by deploying Mediawiki in a multi-container configuration on a user-defined network.

When containers reside on the default bridge network together, they should in theory be able to communicate with each other by name via Domain Name System (DNS)–but they can’t. Instead, those containerized apps need to know one another’s specific IP addresses to transmit data back and forth.

This is a deliberate restriction on the default bridge network. But why? Well, simply by virtue of being default, the docker0 bridge is apt to be a busy place, full of Docker containers without any necessary relationship to one another—without any need to communicate. That could be a security risk in a system predicated on isolation. So on the default bridge, Docker makes containers jump through a few extra hoops to communicate effectively.

When we have a group of containers that need to communicate, instead of using the default bridge we can place them in their own user-defined network. While this isn’t the only way to let containers communicate, it is the Docker-preferred way of doing things, since this creates a precisely scoped layer of isolation. We can create a user-defined network with the command:

The -d (or --driver) argument for this command specifies a model for the new network: bridge, overlay, or a custom driver option added by the user.

Another way to name-based communication between containers on the default bridge is container linking, which involves creating manual links between containers using the --link argument. This was once the standard technique for connecting containers, and you’ll still see it used in the docs for many images. But Docker considers this a legacy option, which means that it is not recommended and may be disabled in the future; linking has been superseded by user-defined networks.

You can follow along in the following video tutorial:

Or, you can go through the written-out steps below:

First, let’s create our new user-defined network. We’ll explicitly specify the bridge driver and name the new network wiki-net, so we can identify its role at a glance.

Now, our new implementation of Mediawiki is going to be broken into two containers:

Last time, we mentioned that our single-container configuration of Mediawiki using the SQLite database was best-suited to a development environment rather than real-world production deployment. But why is that? Why are we bothering with a multi-container configuration? For the answer, we should briefly consider the strengths and weaknesses of our database options.

SQLite is great for development: we can set it up easily and it will run simply and quickly. But it’s not built for large, scalable datasets intended to grow indefinitely and to be queried concurrently by many different users. That’s a different use case, and so it calls for a different tool.

Neither database is “better” or “worse” than the other; they’re not even really comparable, because they serve different purposes. And those different purposes directly inform the container pattern we adopt. This might seem like a simple point, but it’s easy to forget and will constantly guide our approach in cloud native development: our solutions should be determined by our problems and contexts.

That’s a pretty hefty docker run command, so let’s break it down. We’re…

You might find it interesting to launch an nginx container on the default bridge and compare its IP address to that used by our MySQL container on wiki-net:

Here our networks are differentiated at the second decimal. Further containers on wiki-net will have addresses in the 172.19… range.

Remove the nginx-test container if you created it, and make sure you don’t have any extraneous containers running with docker container ls. All you should see is wiki-mysql.

Now let’s get the wiki app itself up and running:

We’re running the app on the same network as the database, and we’re still mounting a volume, which the app will use for some configuration data. When we navigate to localhost:8000, we should see the same set-up screen as last lesson.

Move forward to the Connect to database screen just like you did last time, and now select “MariaDB, MySQL, or compatible.”

For Database host, you can simply enter the name of the database container—in this case, wiki-mysql. If these containers are restarted, they’ll still be able to interact with one another as configured, even if those future instances have different IP addresses.

For Database name, you can choose any name. You don’t need to enter anything for the table prefix, and for the Database password, you’ll enter the password we set via environment variable (same as username, “root”) when we created the database container. 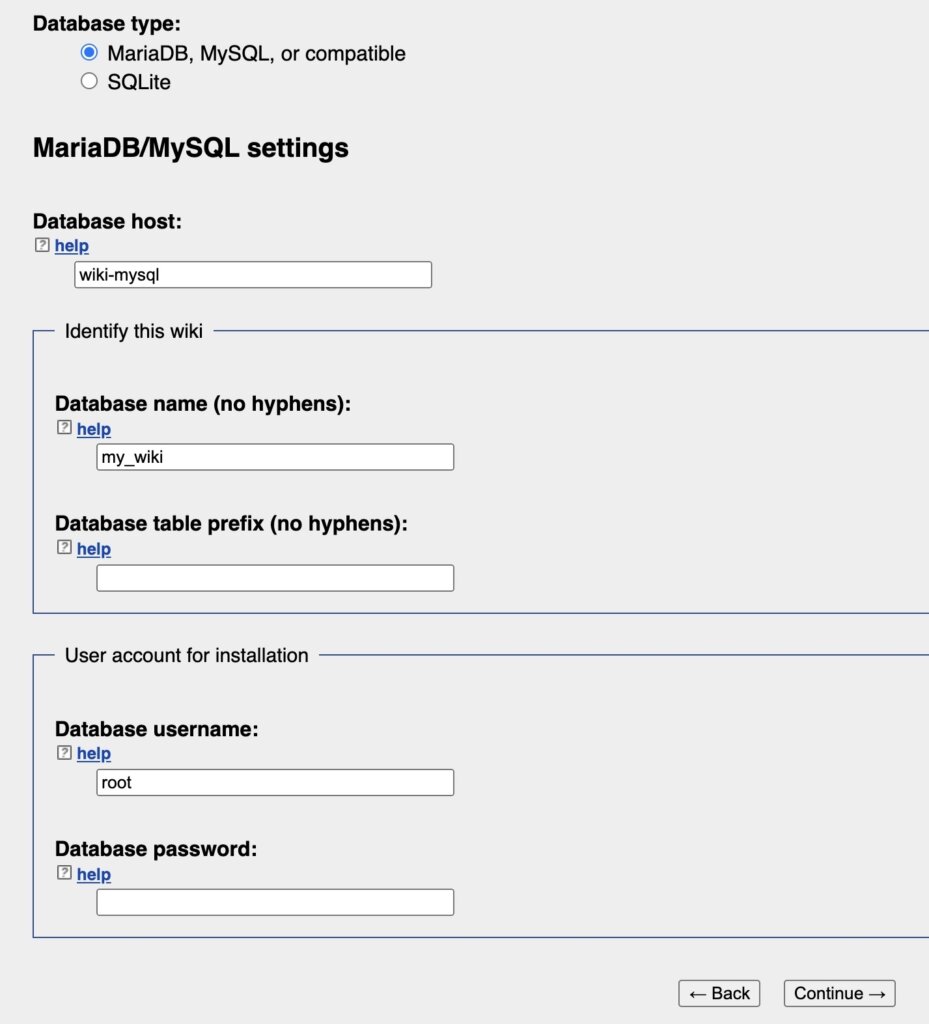 Finalize your administrator information, and then go through the installation process. 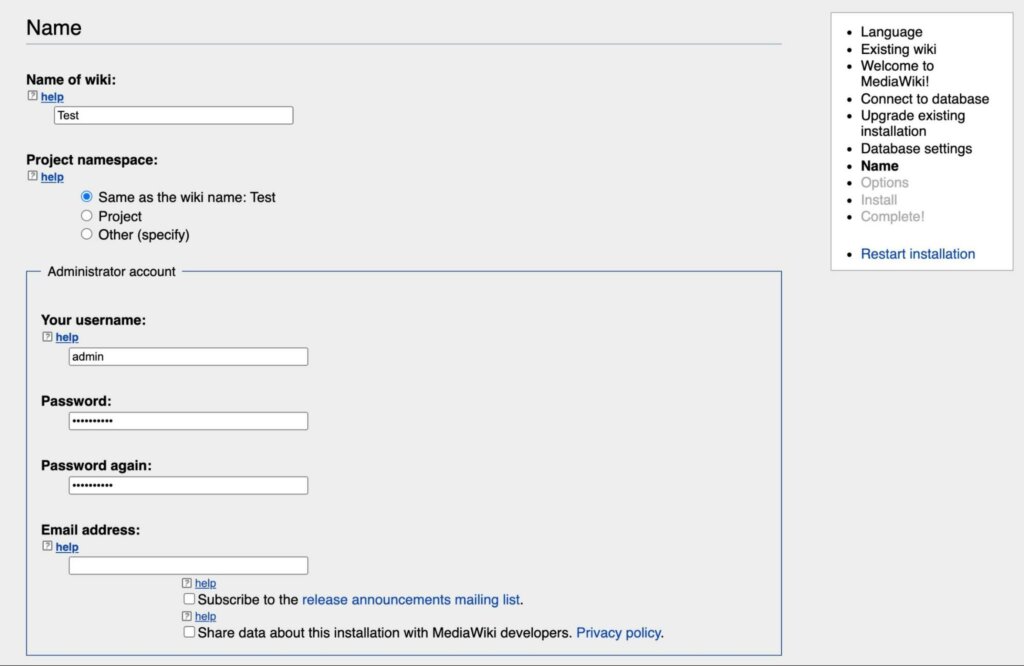 Like last time, you’ll need to download the generated LocalSettings.php file and include it in the base directory of the wiki app. (You can review the instructions from the last lesson if you need some reminders on this process.) Then we’ll commit our updated image and start a new container.

Now we have a multi-container app with a production-grade database running on a user-defined network according to Docker best practices. 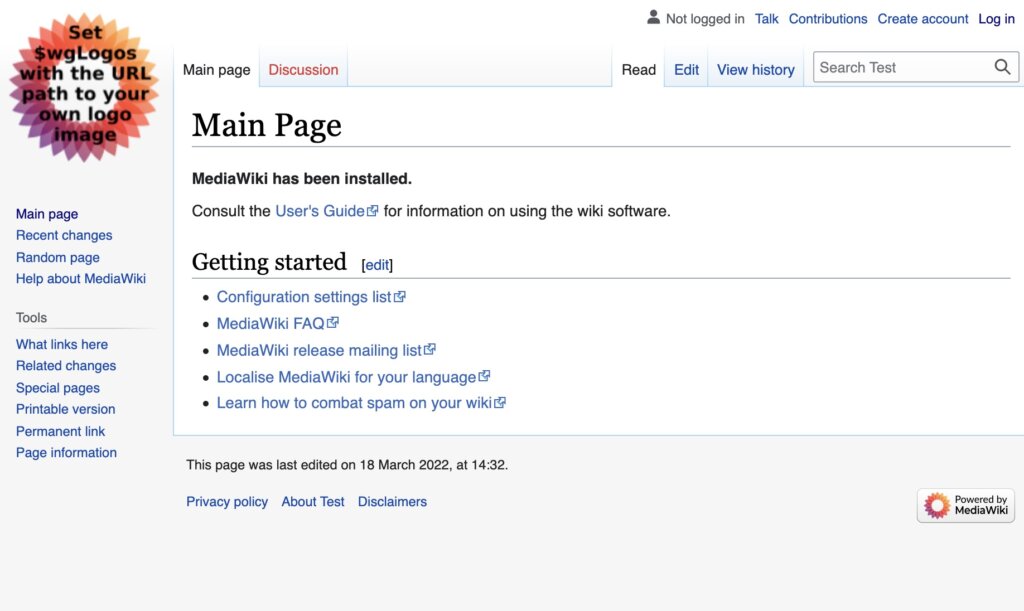 If we want to deploy this app repeatedly or at scale, we might wish to go through a little less manual configuration. Next time, in the final lesson of our container fundamentals module, we’ll learn how to streamline the deployment of multi-container applications.