Cloud Native 5 Minutes at a Time: Volumes and Persistent Storage 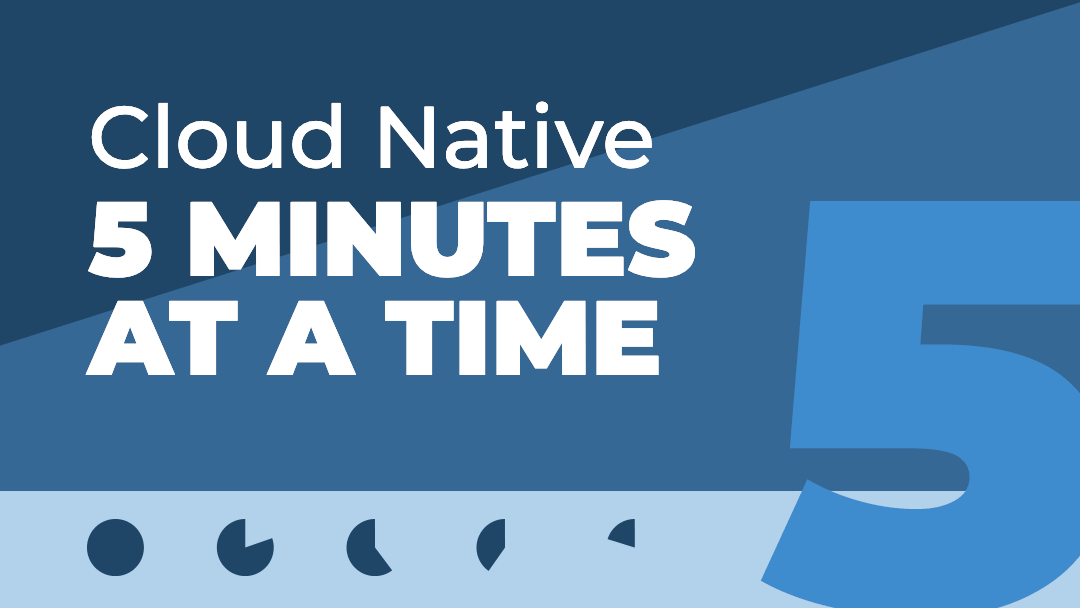 In the last lesson, we learned how to use and share container images using a public registry such as Docker Hub. This time, we’re going to learn how to introduce persistent storage for containers.

When technologists talk about why containers are useful for large-scale enterprise applications, they will often describe containers as “ephemeral”—a word that means short-lived, here and then gone.

At this point, we should have a firmer sense of why the ephemerality of containers is useful—we can quickly and very efficiently spin up a container as needed, only transferring data for image layers not shared by other containers. This quality enables many of the systems we now describe as “cloud native,” including container orchestrators like Kubernetes.

But in the midst of all this transiency, there is a complication: most applications store persistent data for later use. Even simple websites—which can be built on static web servers with no need for persistent storage—are often created with content management systems like WordPress, and those content management systems use databases to save user logins, draft posts, and other data.

If we want to containerize an application such as WordPress, we need a way to create a persistent data store that is independent of any given container, so our ephemeral containers—created and destroyed as needed—can access, utilize, and update the same data.

With Docker, those persistent data stores are called volumes. By default, volumes are directories located on the host filesystem, within a specific directory managed by the Docker engine—but they can also be defined in remote locations such as cloud storage.

What about bind mounts?

Docker provides another way for containers to access data on the host filesystem: bind mounts. This allows the container to read and write data anywhere on the host filesystem. This can be useful for experimentation on your local machine, but there are many reasons to prefer volumes for general usage: they are manageable with the Docker command line interface, they have a more precisely defined scope, and they are more suited to cloud native architectures. For these reasons, we will focus on volumes here.

A given volume may be mounted to multiple containers at once, in either read-write or read-only mode, and will persist beyond the closure of a particular container. If you’re using Docker Desktop on macOS or Windows, you will find that volumes have their own management tab.

Now let’s try creating a volume and mounting it to multiple containers.

You can follow a version of this lesson's exercise in the video below.

With this command, we’re creating a new volume and giving it the name “d6app.”

Next, let’s create a new container from the d6 image we made in the last lesson. As we create this new container, we’ll mount the volume we just created.

The syntax here can be a little confusing at first glance—let’s take a moment to break it down:

Now we should be working in a bash shell within our container. Let’s take a look at our container filesystem with the ls command. We should see the directory where the d6app volume is mounted:

If we change directory and inspect the contents, we should find it empty.

Now we'll go back into the container’s root directory and open the Python app we wrote last lesson. (We won’t need to download nano this time—it’s part of the image now.)

Let’s add some functionality to our die-rolling app. It’s all well and good to get randomized die rolls, but wouldn’t it be nice if we could record those rolls, so we can keep a log of our amazing (or terrible) luck? Update the d6.py file contents to look like this:

When we run d6.py now, the program should open the text file in the d6app volume, convert the randomized output to a string, and record that string (and a line break) for posterity. Let’s test it out.

Within the file, we should find our recorded result. 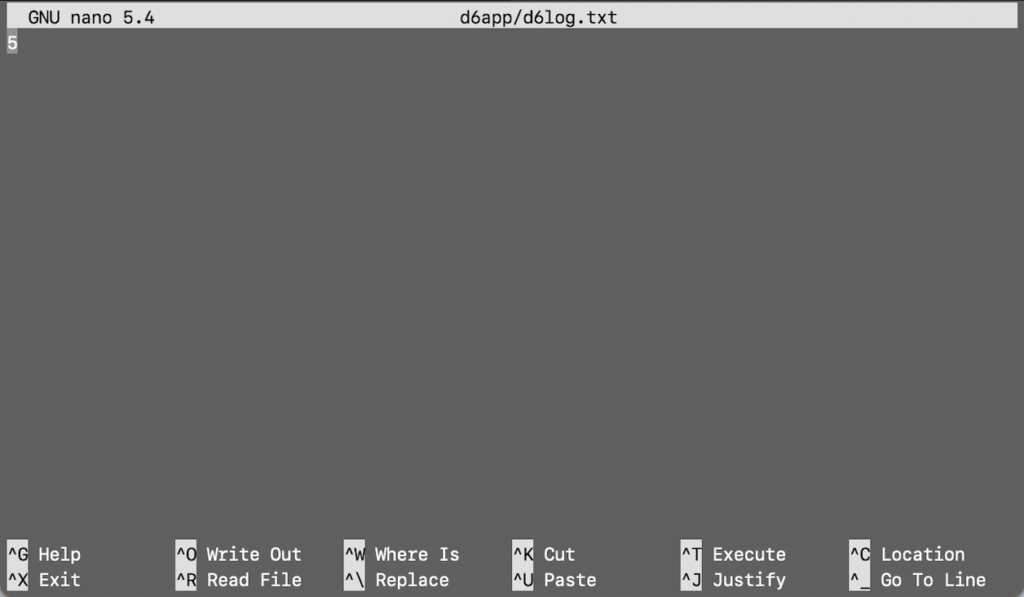 Try running the app a few more times and check the file again. 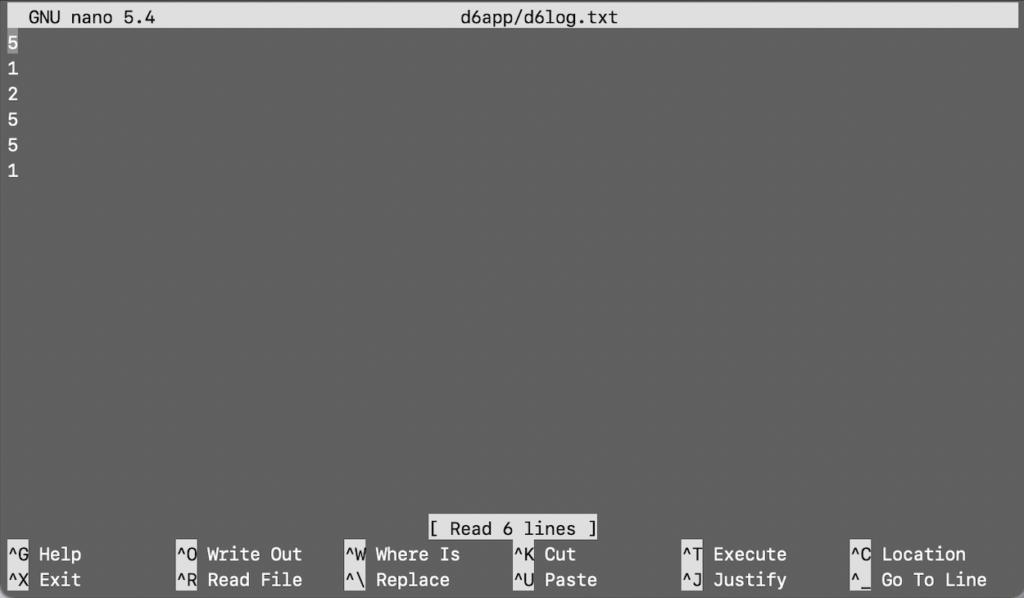 But what happens when we stop the container? Well, first let’s commit and push this updated version of the d6 app to Docker Hub. With the container still running, open another terminal session and enter:

Now we’re going to start a new container with nearly the same command that we used at the beginning of this lesson:

Here, we can see that we’re starting a new container based on the version 1.0 image of the d6 app—before we made any changes today. We’re mounting the d6app volume, as before, and opening an interactive shell session.

This is a good place for us to pause and note that not all containers need to mount volumes with read-write access, and as a general rule, we don’t want to give containers any more privileges than they require. To mount a volume with read-only access, we simply append :ro to the name of the volume directory within the container. For the command above, this would look like: d6app:/d6app:ro

If we open the d6.py file, we’ll find it unchanged. This is the old 1.0 image, after all. But if we open the d6log.txt file in the mounted d6app volume… 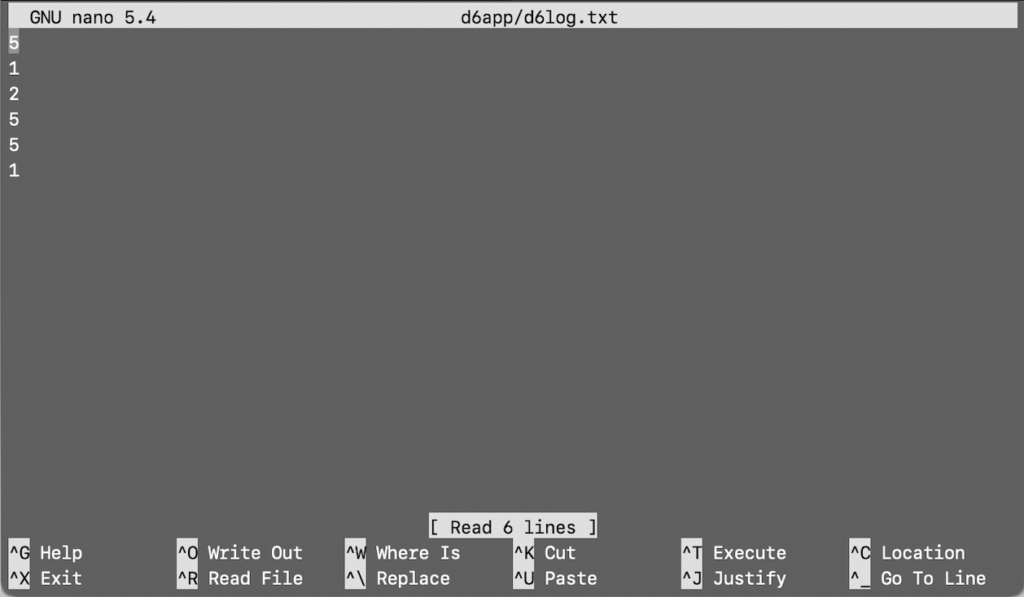 Our file has persisted, carrying the data across multiple containers. We can make a manual edit to the file—typing “test,” say—and then return to the first container. Here, let’s run the Python app again and then check the log file within our initial and most current container: 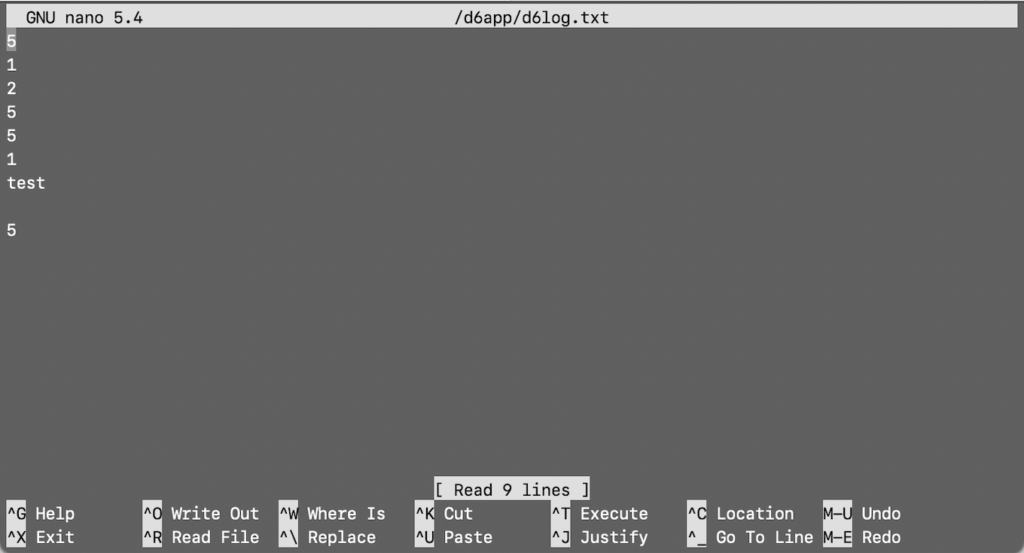 With persistent storage, we’ve found a way to create some continuity between disparate containers. In the next lesson, we’ll go a step further and dive into the fundamentals of container networking, so we can make multiple containers work together in real time.