As many of you may know, Rackspace recently released Alamo, their private cloud software which is available here. Rackspace, with help of Ubuntu OS and Chef recipes has created a single ISO capable of deploying OpenStack to commodity hardware in a matter of hours instead of days or weeks. With the promise of bare-metal to fully configured, ready-to-use OpenStack Cloud, I was excited to give it a try and share my impressions.

Getting the Rackspace private cloud software is as easy as filling out a form with name, profession, and email. I was sent an email immediately with links to the ISO image, start guide, and support forums. Since my previous experience deploying OpenStack cloud was using DevStack, I wanted to compare the two. (I’m going to do another post later comparing them with deploying OpenStack manually).

In the sections below, I have listed points of comparison for Alamo and DevStack in areas of installation and deployment, features and flexibility, and problems. 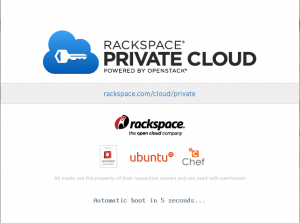 Restarting nova services:
All the nova processes run inside a screen session. So the typical answers from google like sudo restart nova-network will not work. I’ve outlined the process to restart a service below. To attach to this screen session:

In these windows different OpenStack processes are running.  To access each window, type ctrl+a and then ctrl-a )  then the window’s number  To terminate, hit ctrl-c in corresponding window. To start the service, just push the “arrow up”, it should bring up the command to launch the service.

Persistence:
After a system reboot, stack.sh must be re-run and configurations as clears since this is development tool.

RackSpace Private Cloud: I recommend RackSpace Private Cloud for beginners who want to try out OpenStack, because of its simplicity and speed of deployment. There will be fewer issues since everything is pre-configured and ready to use. It is faster to get up and running than DevStack, and much faster than building a OpenStack cloud manually. That said, those advantages are also its biggest downside. Since everything is pre-configured and ready to go, there isn’t much room for customization and alternate configurations. It does not include any tools for monitoring such as Nagios or CollectD. Also, lack of HA support means it’s not suitable for production deployment.

DevStack: For those wanting to set up a flexible dev/test environment that can support multiple networking modes and have multiple deployment options, DevStack is the better choice. It has a higher skill requirement, but in the process of installing and deploying with DevStack, you’ll learn how OpenStack daemons work and gain knowledge on how to customize the deployment. DevStack is better at preparing OpenStack installers for building and managing OpenStack Clouds with varying configurations.