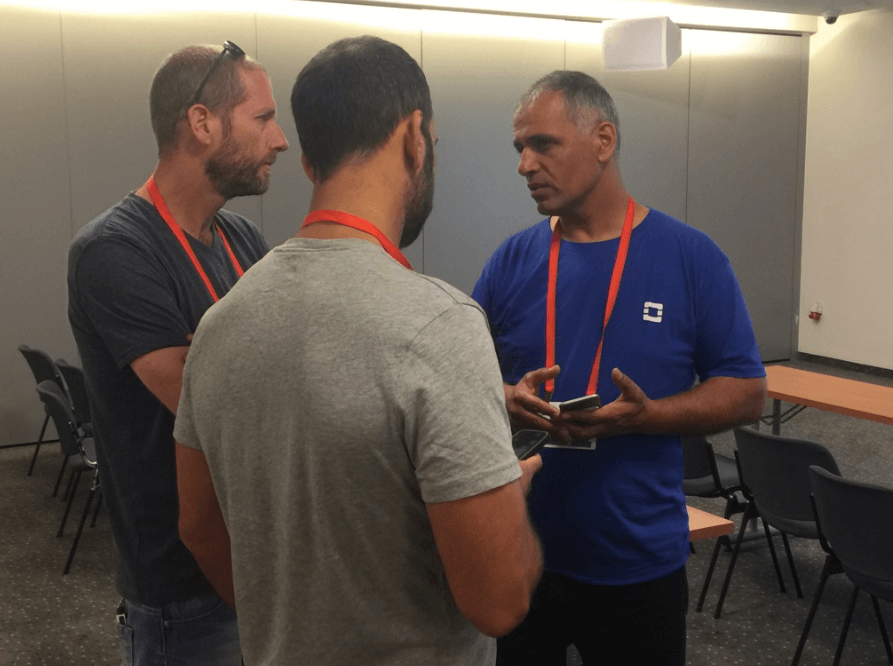 Have you ever seen dozens of Stackers in military uniform? Well, welcome to OpenStack Days in Tel Aviv, hosted by GigaSpaces! AT&T, Red Hat, IBM, IDF, Rackspace and CERN discussed how to train for OpenStack on OpenStack, who the OpenStack contributors are, and why clouds are so important for modern science in general, and physics in particular. Let’s dive in for more details!

The most closed OpenStack ever, the event took place at the Tel Aviv convention center. The keynote session started after opening words by Nati Shalom from GigaSpaces and an overview provided by Jonathan Bryce, who described the state of the worldwide OpenStack ecosystem.

The first presentation was made by Dor Litay and Avi Shimon, representatives from Israel Defense Intelligence (IDI), the largest member of Israel’s Intelligence community, and part of the Israeli Defense Force (IDF). They spoke about their participation in OpenStack and how they use this technology. 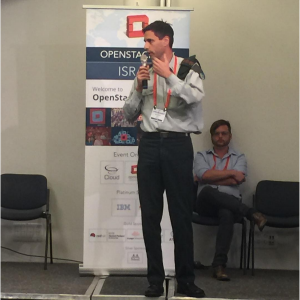 The Senior Global Manager of Engineering at Red Hat, Livnat Peer, is a Cloud Infrastructure expert. During the OpenStack event, she tweeted that IDI’s presentation suggested a wind of change. 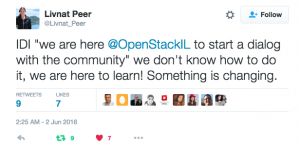 IDI’s staff said that they viewed cloud computing as a way to decrease the gap between their internal IT and the global-civilian, internet-based, IT world. They said that they use a highly specialized, highly “opinionated,” private cloud computing platform and that they have total control of every aspect of the stack, but that it is based on OpenStack.

They also told the audience about challenges they face when working with OpenStack. For example, like many organizations, they have had problems with the lack of cloud engineers, bare-metal provisioning at scale, SDN and NFV related issues, and … forming relationships with the community! As a way of helping to form relationships, the IDI staff asked the audience two questions: “What can we share?” and “How can we contribute?”

First, in this reporter’s opinion, OpenStack needs better coverage for the different projects inside its ecosystem. For example, have you ever tried to find a navigable list of projects under Big Tent? You should try it, at least once, to see what I’m talking about. [Editor’s note: We’re working on one. :)]

Second, IDI could make a significant contribution through its ability to analyze “open-source intelligence” (OSINT). Contrary to the name, open-source intelligence has nothing to do with open source software; it just means analysis of information that’s publicly available, such as websites, public forums and mailing lists, and newspapers. That’s exactly what we, as a community, need. If IDI is able to invest some man-hours into monitoring the projects’ news and making digests publicly available (like the Community App Catalog Review, for example) this will be a great help and a great contribution that all of the community could benefit from.

OpenStack is about people

This part of the story started in Austin, when Boris Renski said that OpenStack’s success required one part technology and nine parts people and process. At OpenStack Days in Tel Aviv,  Frank Weyns (Rackspace’s Director, OpenStack International) agreed with Boris. He said that it went like this: if you want to start or continue corporate activity with OpenStack, you should check whether you are ready for it in terms of your organization, teams and workloads. However, he felt that the most important key to success was the people in your organization. 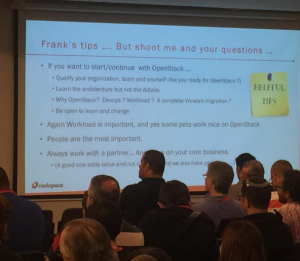 Shimon Benattar, from AT&T, started a discussion about the process of contribution, asking what you should do if you want to contribute to OpenStack. The answer consisted of these five steps:

These steps seem to mostly be common knowledge, but Maish Saidel-Keesing from Cisco (and author of the Technodrone blog) raised a question: “Who are you, Mr. OpenStack Contributor?” This question received emotional responses from operators, who have for some time felt that they contribute to OpenStack in a variety of ways, such as Ops repositories, working groups, Ops tags, and so on.

Operators also said that they are the ones that suffer the daily pain of working with OpenStack’s complexities, and insist that CONTRIBUTIONS TO THE COMMUNITY CONSIST OF MORE THAN JUST CODE, pointing out that to date, an operator has NEVER been elected to the Technical Committee of the OpenStack Foundation. Why? Unfortunately, as of now, this question still has no answer. Even from these two guys: 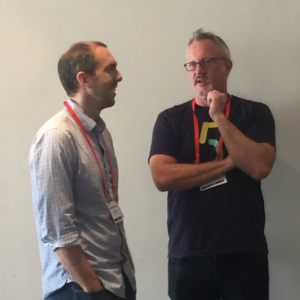 I’m pretty sure I’ve seen these guys before …

To learn and to study

To begin the next part of this report, I ask: “Have you ever heard about Open edX?” It’s an open source Learning Management System (LMS) and Gigaspaces and hastexo have decided to train new stackers using a real OpenStack environment on it. By using Open edX with OpenStack, they are now able to teach OpenStack, using OpenStack. Basically, as Florian Haas explained, they used a scalable Heat template to deploy Open edX on OpenStack, to start with. They then used the hastexo XBlock, an Open edX extension plugin available under the AGPL, to point Open edX to an OpenStack cluster to provide virtual environments for dynamic labs. So OpenStack running Open edX running a course on OpenStack pointing to OpenStack. Talk about eating your own dog food! 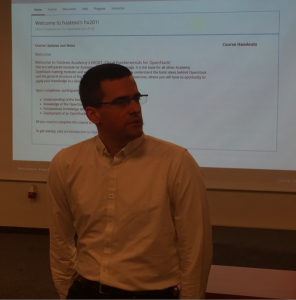 Florian Haas thinking about my question 😉

CERN’s Tim Bell’s keynote speech was a surprise; I never realized that CERN works not only to study physics, but also to predict the future of technology. Of course, Tim had a lot of slides that discussed how 11,000 physicists throughout the world have used an OpenStack cloud to understand how the universe works and what it is made of, but he also had a couple of slides that illustrated his thoughts about how computing services have encountered major technical and cultural transformations.

According to CERN, we should expect data processing rates of 400 petabytes a year by 2023! No wonder the need for “unicorns” — those individuals with varied skillsets — is so great. Tim also mentioned that Agile IT is a matter of cultural change. While moving to Agile technologies brings great benefits (for example, reduced deployment time, continuous integration validation, and greater flexibility), we should not forget Hooke’s Law:

So from a scientific point of view, when starting your cloud journey, you also need to check that “the tail” of your company is moving as fast as “the head.” For example, people need time to adjust to cultural challenges and process changes.

To successfully address these major cultural and technological changes, CERN currently runs 90% of its computer infrastructure on OpenStack.

NFV roadmap: last, but not least

Network Functions Virtualization (NFV) enables telco vendors to transform the world from a place that uses custom hardware to a place that uses virtual functions with a new level of flexibility and agility. NFV is all about the IT-ification of the telecom industry.

OpenStack adoption among telcos such as AT&T has been overwhelming, which means that they need software-minded people, and developer-oriented people and processes.

NFV provides many new ways of deploying services for telcos, and it has a lot of options for the scalability and flexibility of its services. OpenStack is adopting features to support NFV. However, it still is weak in some areas, such as distributed NFV and controlling distributed locations. There are a lot of initiatives, many of which started in Austin. But for now, OpenStack is in the very early stages of adopting NFV.

Thanks and call to action

Thank you to Nati and the team for making this all possible! We hope to see you at OpenStack Silicon Valley. 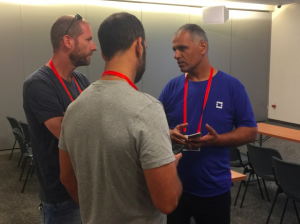 Our next story will be about OpenStack Days: Prague. If you want to share the story about your local OpenStack Days event with OpenStack:Unlocked, please send it to news@openstackunlocked.com – I mean … We really are Unlocked. So join us to tell OpenStack stories!