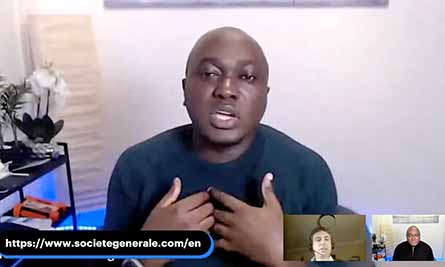 Using Mirantis Kubernetes Engine, Mirantis has helped Société Générale build a cloud native platform that runs more than 1,000 apps all around the world, with 33,000 containers running on 9,000 cores.

Founded in 1864, Société Générale is among the most venerable institutions in French banking. Today, the financial services group is present in more than sixty countries—and runs more than 1,000 software applications used across industries and around the world, all on Mirantis Kubernetes Engine. With 33,000 containers on 9,000 cores, Société Générale has leveraged Mirantis technology to create cutting-edge cloud-native infrastructure.

“For some years now,” says Florent Carre, Cloud Infrastructure Specialist at Société Générale, “we are on a journey of transformation.” In an increasingly digital and fast-moving financial industry, cloud infrastructure is an essential foundation for success, accelerating an organization’s agility in a competitive market. Today, according to Carre, Société Générale aims to run 80% of its workloads in the cloud.

When the time came to migrate from a monolithic architecture, Société Générale sought a container platform suited both for a wide range of applications, from legacy software to future innovations. Expectations for the new infrastructure were high. It would have to be robust enough to serve a global user-base while meeting the most rigorous security requirements—and giving Société Générale’s team the tools to swiftly shape resources for developers and clients.

Migrating to the Cloud

“We have people from Mirantis working with us on a day-to-day basis; when we are doing major upgrades or working on a complex incident, we can work with Mirantis experts and even their development team.”

Société Générale needed a cloud architecture that could be tailored to a diverse range of requirements. Some sensitive workloads would need to run on the private clouds and be isolated from other applications, while other services might be better suited to public clouds. The new infrastructure would have to support compliance and innovation. It would also need the ecosystem and reliability of an open source solution.

For the sake of efficiency and agility, Société Générale wanted to integrate all the layers of their service while utilizing a hybrid cloud model, relying on both their private cloud and public cloud resources.

Société Générale is highly satisfied by this collaboration. According to Carre, “We have people from Mirantis working with us on a day-to-day basis; when we are doing major upgrades or working on a complex incident, we can work with Mirantis experts and even their development team.”

With Kubernetes as an emerging industry standard for container orchestration, the Société Générale team knew they wanted to leverage its power. Kubernetes would bring even greater flexibility and scalability, along with the vibrant community support of a widely-used open source solution.

This migration was easier than the move from monoliths to the cloud. “If you’re already in containers,” says Service Manager Laurent Verbièse, “it’s not that complicated to move from Swarm to Kubernetes. We were still using the same line of products—now we’re using Mirantis Kubernetes Engine, which supports both Kubernetes and Swarm.”

Different teams within the organization were able to migrate at different speeds, and with Mirantis Kubernetes Engine’s dual-orchestrator support, Société Générale could be flexible. Indeed, Mirantis Kubernetes Engine brought the Société Générale team an unprecedented degree of flexibility and rapid scalability—a balance not possible with other platforms. The number of containers running on the organization’s platform grew by leaps and bounds—and all the while, integrated with their CI/CD platform and enabled the team to build and use the internal tools they needed.

Verbièse explains, “As part of our private cloud, we’ve developed unique APIs for our services. These help developers to follow all compliance requirements as well as access load balancing, namespaces, and other Kubernetes features.”

This ability to build an API tailored to their needs has enabled Société Générale to achieve harmony between security and innovation. The foundation of Mirantis Kubernetes Engine facilitates role-based access control (RBAC), making it so that team members can only access relevant namespaces and applications. Additionally, Société Générale has organized services in its private cloud into security tiers, so that developers on a particular project can use the custom API to easily access services with the appropriate security architectures and development standards.

In 2020, Société Générale set a goal to run 15,000 pods—and in the course of a year, vastly surpassed that objective, growing even more rapidly than they had hoped. Today, they run over 1,000 nodes of Kubernetes clusters with about 33,000 pods.

Trusted Partners for a Cloud-Native Future

As Société Générale’s relationship with Mirantis has developed, the organizations have become trusted partners and collaborators. Both are active participants in the cloud-native open-source community. Société Générale provides valuable input into Mirantis’ new features, roadmaps, and R&D process, helping to shape the future that the companies are building together. And Mirantis continues to support Société Générale as the organization sets its sights on some of the globe’s biggest challenges.

“We try to customize the clusters we provide with more and more security and more and more features,” says Carre. “Our optimizations are allowing orgs to save up to 30% on compute resources—and therefore energy.”

Société Générale has set a goal of carbon neutrality by 2050, and that is one of the IT team’s foremost challenges moving forward. Fortunately, the multi-cluster architecture enabled by their new infrastructure is giving them the tools they need. “If you have the ability to easily move workloads from one cluster to another,” Carre says, “you also have the ability to move clusters based on environmental footprint.”

“Cloud-native,” he adds, “will bring more and more tools for us in the future.”