Eric Ji - December 15, 2015
- VNF, security, palo alto, NFV, FWaaS, fuel, firewall
As IT organizations increasingly look to leverage cloud computing to improve agility and economics, OpenStack is gaining enormous momentum as a preferred tool for building new on-premise cloud datacenters. But putting an OpenStack cloud on your enterprise network brings its own security challenges, such as how to support and segregate tenants, and how to allow for workloads at a range of trust levels. Just as OpenStack's agility empowers self-service and constant addition, removal and migration of workload instances, it must provide the ability to rapidly provision security services around this dynamic and fast-changing workload population.

OpenStack security groups offer a first line of defense for securing east-west traffic -- that is, traffic between virtual machines. The OpenStack Firewall-as-a-Service (FWaaS) plugin can help you configure firewall rules and policies on firewalls or Intrusion Prevention Systems (IPS). Unfortunately, these simpler solutions come with some limitations: security groups operate at the instance level, and FWaaS works on virtual routers within a project. The way FWaaS is currently implemented in OpenStack, a single set of rules is applied to all virtual routers on all subnets, which limits their flexibility and capabilities, thereby preventing companies from the deployment of enterprise-critical production workloads.

To combat this lack of flexibility, you might also implement a network virtualization platform or SDN to provide L2-L4 stateful firewalling features, delivering segmentation within virtual networks. But again, such traditional security technologies are port-bound, which means they lack the ability to control access based on application identity, and they may thus be ineffective for blocking today’s modern attacks.

This week, Mirantis and Palo Alto Networks are announcing a partnership to validate and simplify deployment of Palo Alto’s VM-Series virtual firewall as a virtual network function (VNF) on Mirantis OpenStack. Although VNFs are sometimes associated with telcos and other communications service providers (CSPs), this is frequently a misunderstood limitation.  In fact, this joint solution is ideally suited to securing east-west traffic between applications, which is typically the largest traffic burden in any web-scale cloud running distributed and elastically-scalable applications.

The solution is engineered to protect applications and data from advanced cyber attacks in many different ways, including: 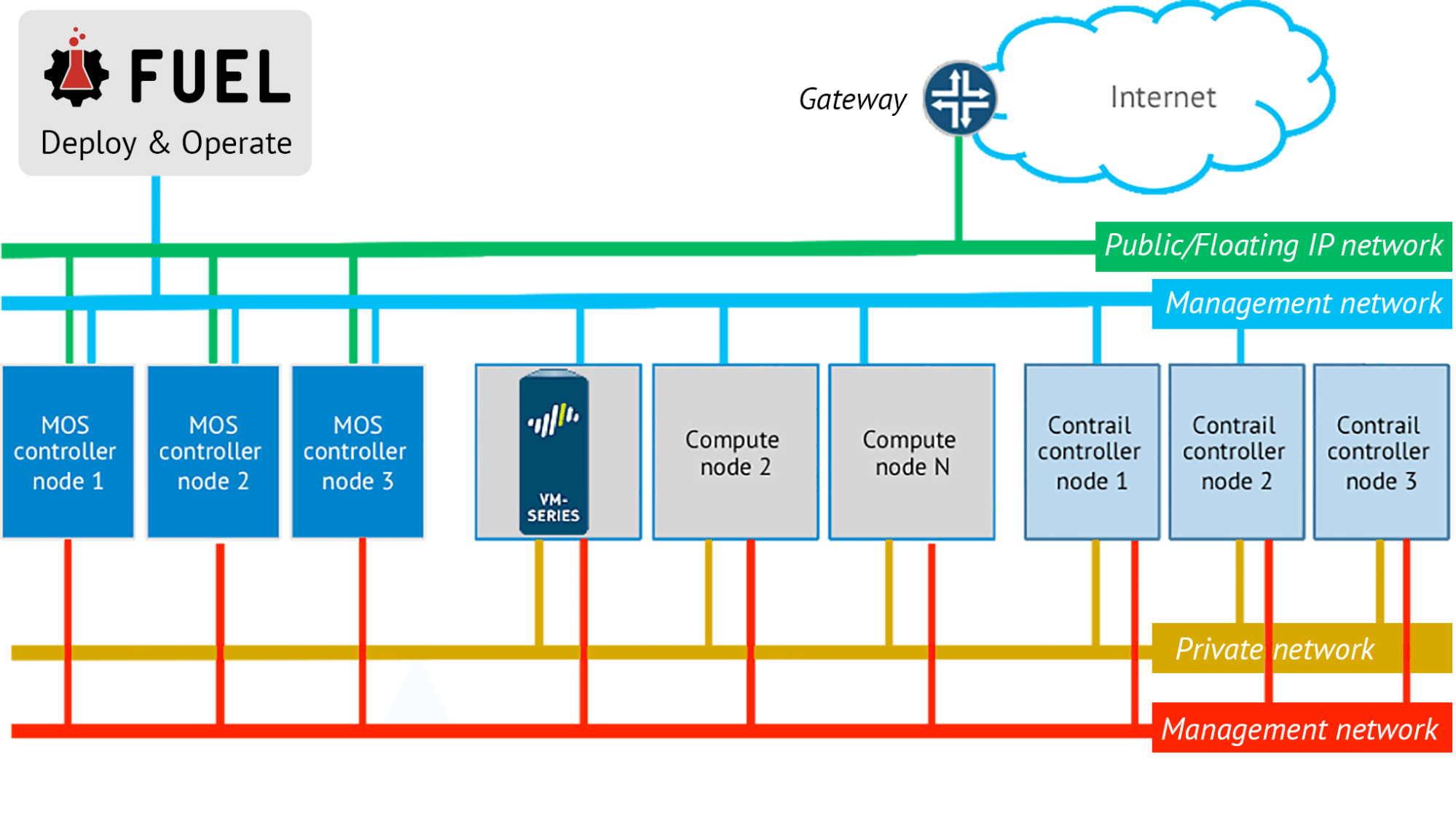 One of the key components of this joint solution is the way it intelligently maps security policies to the VMs and seamlessly steers network traffic from designated workload VMs to advanced security appliances to enforce the proper policies.

Traffic flows can be directed to, and processed by the Palo Alto VM-series firewall using one of three available service insertion (also called service chaining) modes supported by Contrail: 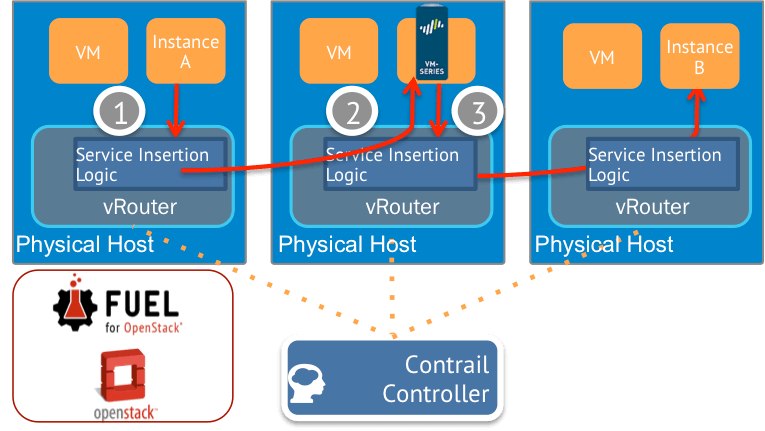 For illustration of this joint solution, the service insertion traffic flow is shown in Figure 2 by using In-network mode as an example:

In our simple example however, the VM-Series firewall ACL specifies that this particular traffic is permitted, so the traffic is forwarded to Instance B.

Figure 4:  The ACL for the Palo Alto Networks VM-Series

The return traffic from the Host B goes through the similar steps to reach the Host A.

Palo Alto Networks VM-series firewall application running on Mirantis OpenStack provides an integrated solution that enables IT organizations to unlock the benefits of OpenStack, from greater flexibility and agility to optimized capacity utilization and operational efficiencies, all without compromising security.

If you're interested in getting more details about this solution, or if you want to check it out for yourself, we've published a runbook describing  the reference architecture, installation and configuration steps for Mirantis Openstack, the Juniper Contrail plugin for Fuel, and Palo Alto Virtual Firewall when preparing an environment with service chaining.

This solution follows the launch of the Mirantis NFV Initiative, which included an NFV reference architecture to enable customers to easily deploy NFV solutions on OpenStack, and an OpenStack validation program for partner virtual network functions (VNFs). Moving forward, we will continue to bring VNFs, tools, infrastructure components, and complementary applications to the platform.