There’s a tremendous amount of talk about the shift in the networking business from hardware-bound networking to SDN. I worry when I hear that SDN is the next ‘big data’ or ‘cloud’ trend. It makes me think that just as every application and infrastructure company is now offers ‘cloud’ and every data technology company is making things for ‘big data’, soon every networking company will be leading the charge into SDN.

One way to think about life before SDN was “Hardware Defined Networking”: routers, firewalls, switches, NICs, etc., all imposed control on network traffic flows based on what they knew about the traffic. So to move beyond that, let’s look at two use cases for adding SDNs in the data center. The first relies on creating an overlay purely in software; and second addresses participation by  switch and router elements

Virtual appliances usually ride on top of the cloud SDN infrastructure; they are isolated from the underlying implementation of the cloud itself. These types of services are usually managed by the cloud infrastructure via an API; being purely software, they are instantiated on demand. Examples include the Quantum L3 router in Folsom and CloudPipe in Essex. Mirantis is working with the OpenStack community on standardizing the service insertion APIs and logic for Grizzly; in the meantime, Mirantis has architected the service insertion solution for the Folsom code base.

This approach involves extending the L3 APIs offered by the L3 agent used in Quantum plugins such as OVS, and replacing the agent service code with equivalent functionality offered by the virtual appliance.  This first approach also involves one-for-one replacement of the Network Node in Quantum with a VM. This VM would offer services to multiple cloud tenants through linux namespaces providing tenant segregation. This approach is demonstrated in Figure 1, below. 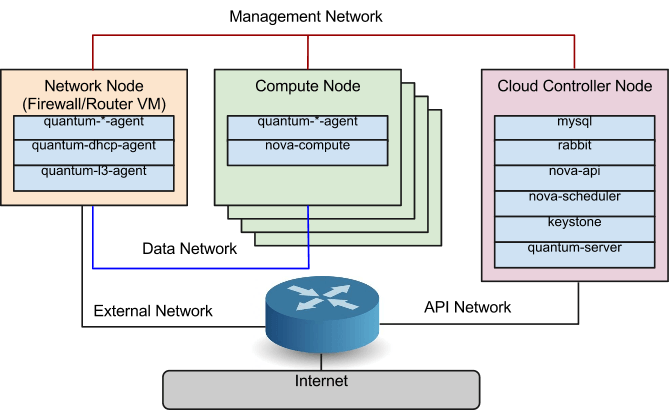 A second approach involves creating on demand network elements for each tenant using nova compute guests; this is done when tenant evokes the appropriate API to create an element such as router, firewall, or VPN. This approach is demonstrated in the Figure 2. 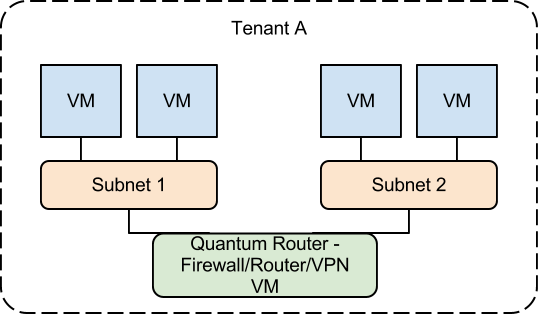 What this means is this: once you can create discrete, standalone virtual network service elements on-demand, it helps make it much easier to create multi-tenant network services in the SDN infrastructure.

Now that we’ve seen the straightforward case of inserting virtual network service elements, let’s look at adding a hardware appliance to an SDN. This is something of a challenge. First of all, hardware appliances usually do not understand the virtual network topology of the software overlay networks and require a bridge device. The bridge device can be a dedicated general purpose compute host or a VM. The bridge flattens out the virtual network, presenting a plain segment to the hardware appliance, which can either: offer single tenant services and be provisioned on the fly from a pool; or, can offer multi-tenant services, but without network segregation on its network segment.

For mixed SDNs inserting a hardware network appliance is easier. For example, older style VLAN infrastructure hardware can directly participate in the network scheme, so that appliances which offer internal virtualization capabilities can be “split” between multiple tenants while still offering traffic and control segregation. We built out a deployment using this strategy for one of our clients, where we integrated the Juniper SSL VPN into each discrete tenant network.

For newer OpenFlow networks, Mirantis has worked with BigSwitch in developing an approach where a particular flow will get translated into a VLAN by using a OpenFlow compatible switch operating in the mixed OpenFlow/Legacy mode, such as Arista 7050. In this way, the HW appliance can internally segregate network traffic via VLAN tags, and partition its services  on a tenant-by-tenant basis.[caption align="aligncenter" width="670"]

I want to close with an interesting edge case: VxLAN, the tunneling protocol developed by Cisco and VMware originally for use in VMware environments.  Currently, VxLAN it is primarily available as a part the of Cisco Nexus 1000V virtual switch product line. However both Cisco and other hardware vendors are working on integrating VxLAN into their hardware switch line,  with the stated goal of offering mixed mode SDNs (i.e., combining both software- and hardware-originated services. As it turns out, Arista has already released its 7150, capable of translating VLAN into VxLAN, and allowing the same ability to insert HW-appliance-originated services and still preserving multi-tenant segregation. Arista currently does not have an Quantum controller, however developing one would not be a difficult exercise.

One final thought: I’ve seen some discussions of SDN as a choice between hardware-controlled network services and SDN network services. As OpenStack capabilities have improved, this oversimplification is no longer a constraint.