This is the ninth in a series of short tutorials showing how to perform common cloud operations tasks in Mirantis OpenStack Express 2.0 — Mirantis’ “Private Cloud as a Service”

In our last tutorial, we learned how to log into our Mirantis OpenStack Express cloud's Controller Node, so we can issue commands via the OpenStack CLI. Now, we’re going to do something practical with our new-found CLI capabilities: define and launch a VM with a specific image, VM flavor, network connection and SSH key, and pass in a script for execution post-boot that installs Apache for us, along with a custom index file for testing. Thanks to Mirantis Product Architect, Christopher Aedo, for inspiration and code-snippets.

To start, log into your cloud's Controller node (following the instructions in our prior post and issue the command source openrc to authenticate.

Now we can begin to gather the information and prepare the resources we need to use the nova boot command to launch and install Apache on our VM.

The command glance image-list lists the images we have available. We'll use the Ubuntu 14.04 LTS dev image, so we'll need its ID.

Then we’ll set up the following script in the root of our Controller node, using vi, calling the script install-apache.sh: 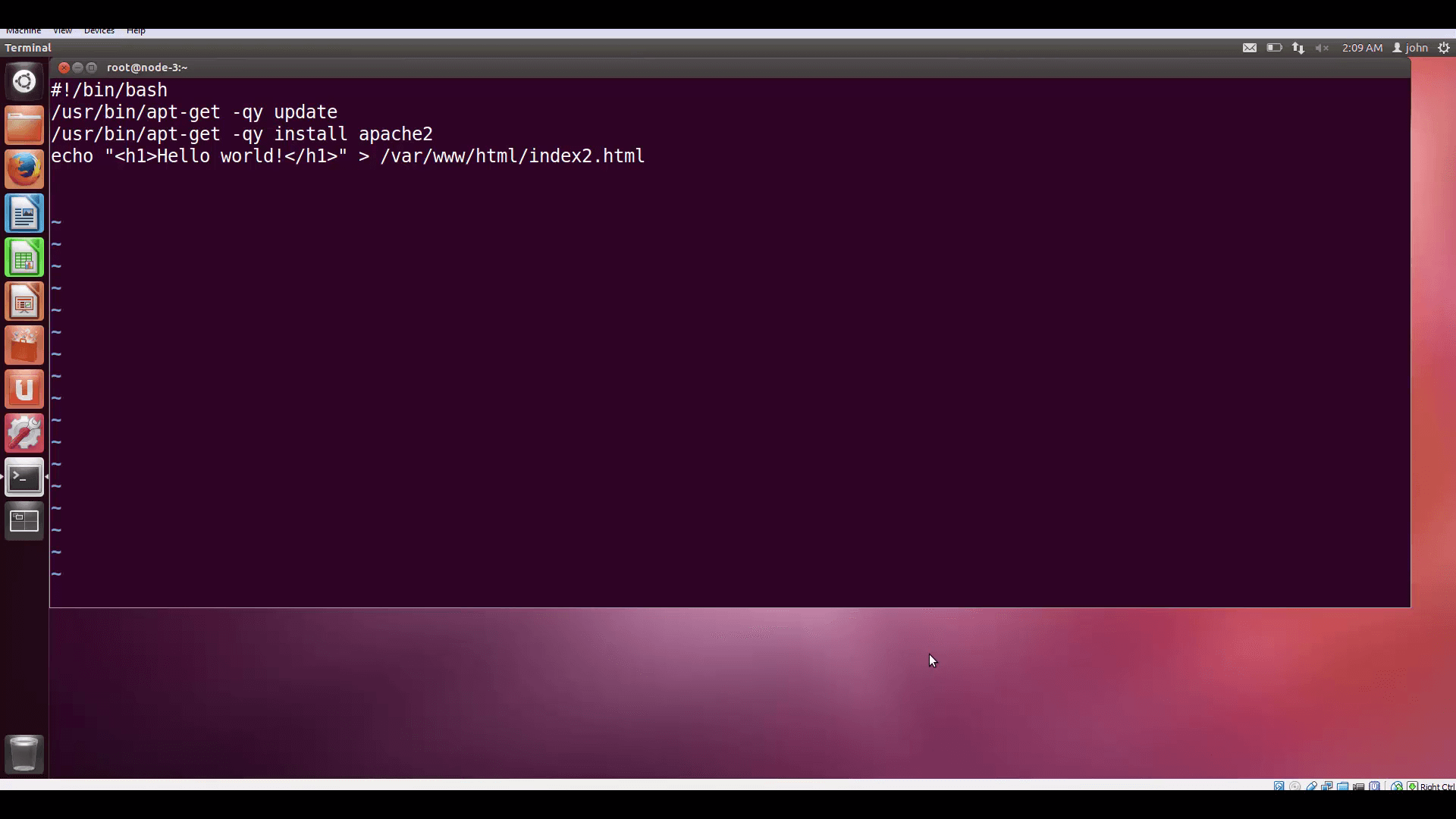 Our user-data post-boot script will be passed to the VM we launch for execution. As you can see, it runs an update, installs Apache, and creates a one-line index file, called index2 to avoid conflict with the default index.html file Apache installs.

As you can see, this is the script we want to execute post-boot, to run update on our VM, install Apache2, and create an index.html file. The reason we call that file index2 is that we don’t want to conflict with the default index.html Apache installs.

Now we can check out the VM flavors available to us by entering nova flavor-list. We’ll pick the medium flavor for our instance, which is index 3.

We can also remind ourselves of the keypairs we have available by executing nova keypair-list. We'll need the name of a key to launch our instance. 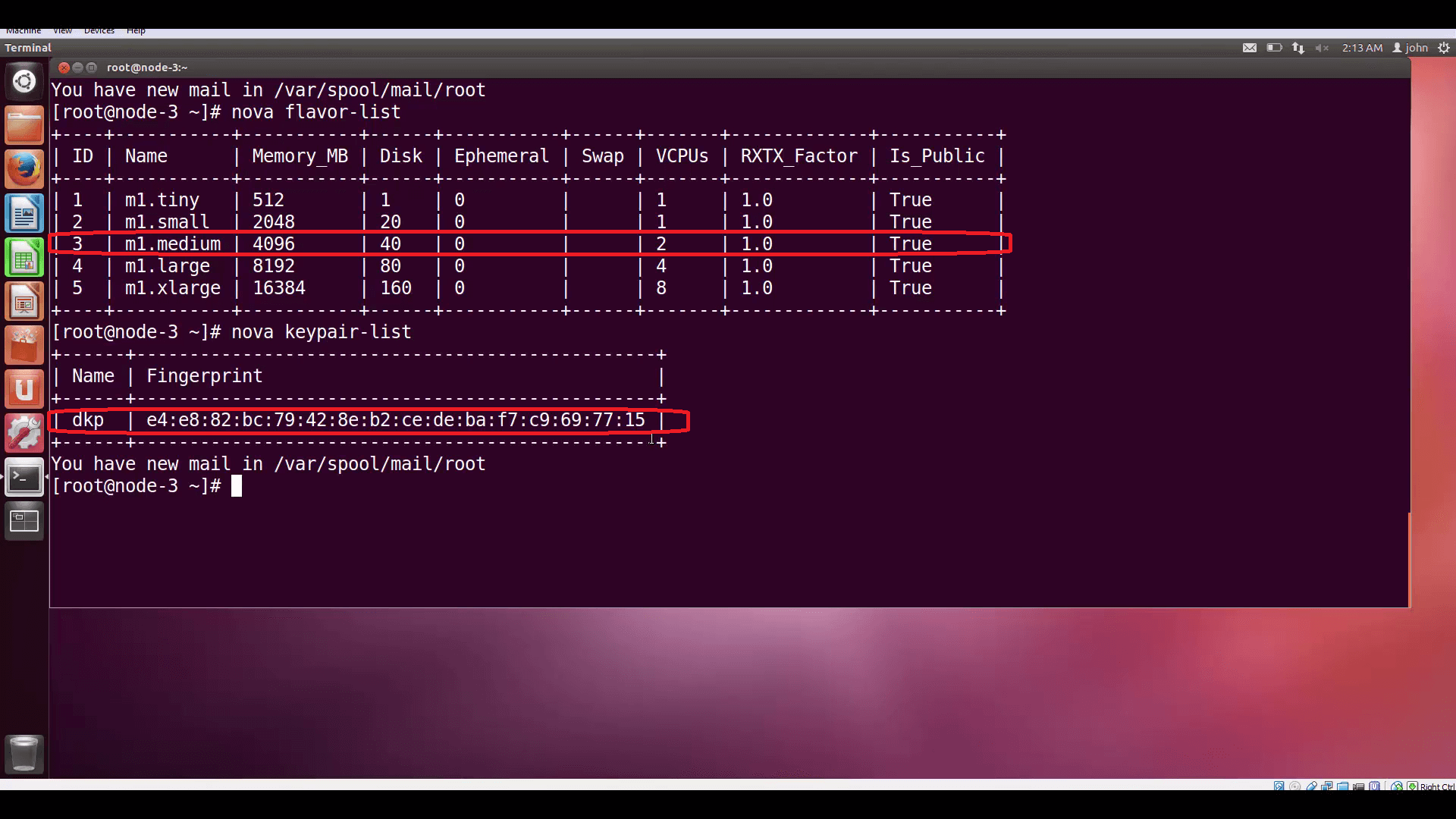 We'll use nova commands to see what flavors we have available, picking m1.medium, index 3 for our instance. We'll also check to see what keypairs we've created.

We'll find IDs for the networks we have available by executing nova network-list. We’ll attach this VM to the toplevel internal network, net04. Later, we’ll go to Horizon to give it a floating IP to make it accessible from the internet. 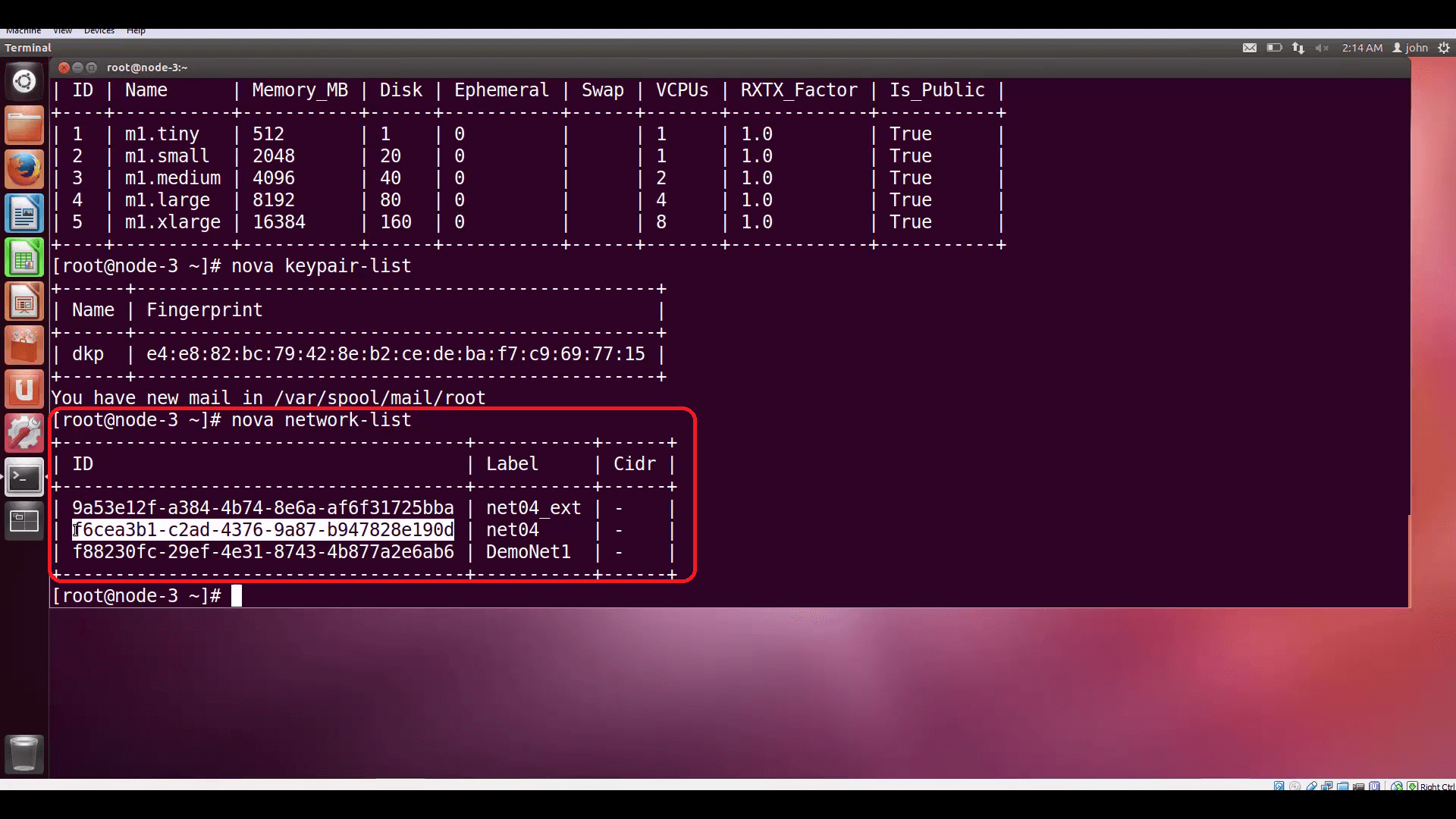 We'll use nova network-list to find IDs for available networks, and attach our instance to the net04 internal network.

Finally, we'll take all the information we've assembled and include it as arguments to the nova boot command, which will launch our instance and install Apache. Note the way arguments are referenced: argument flags and data types are consistent throughout the OpenStack CLI. 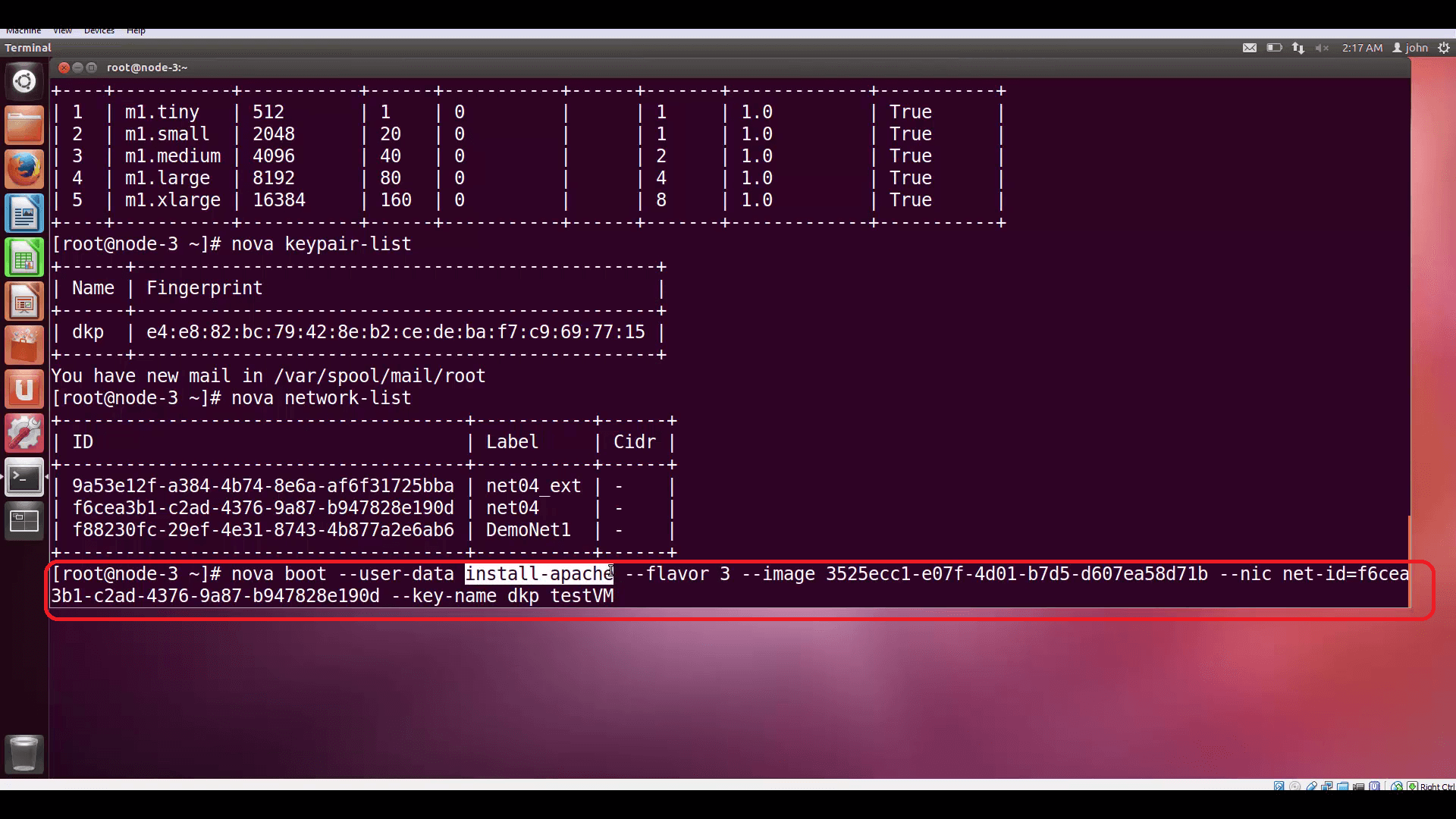 The command nova boot will be used to launch our instance. Note the way arguments are referenced: argument flags and data types are consistent throughout the OpenStack CLI.

Nova compute gives us back a table of VM parameters and status info. 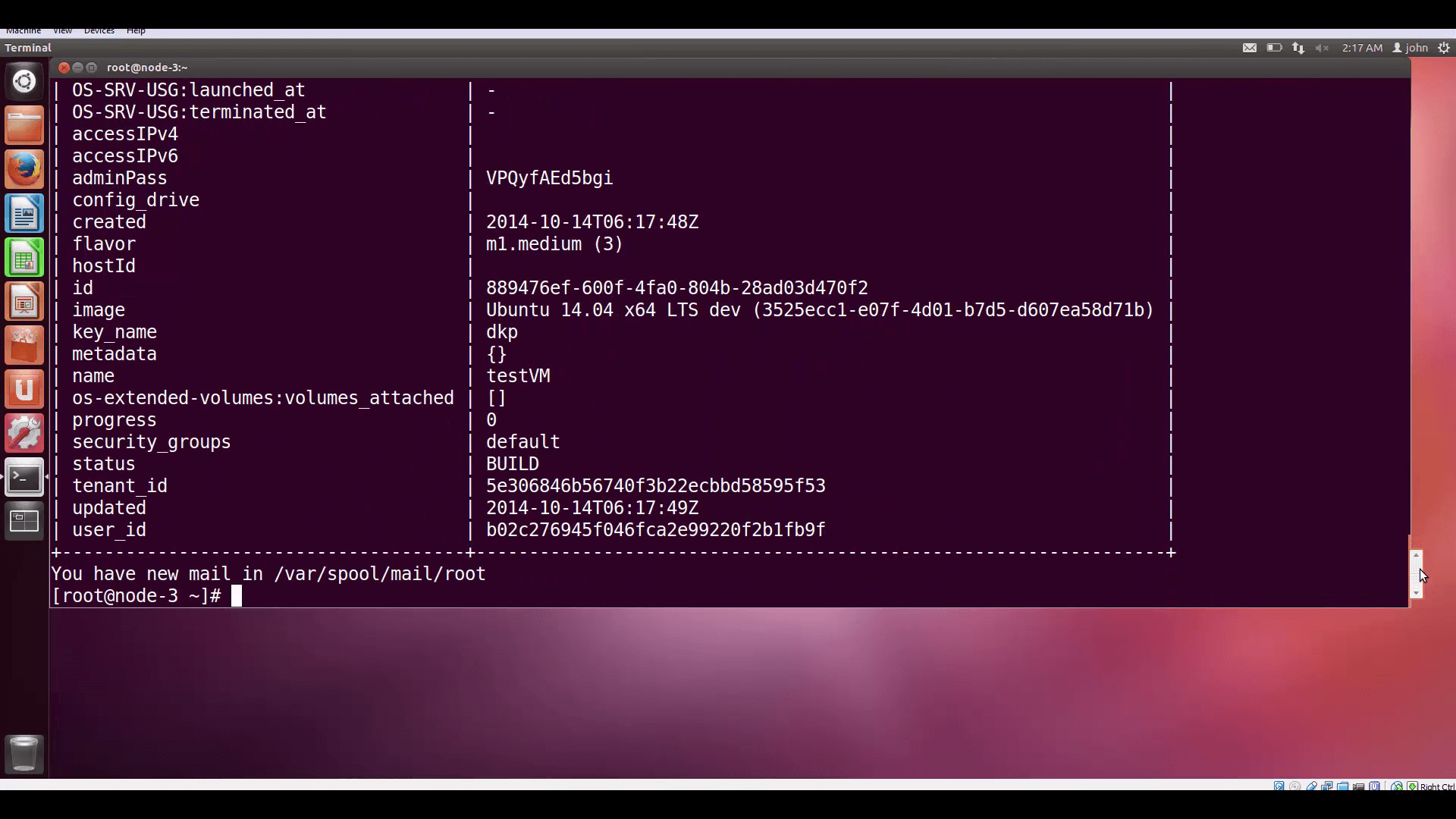 The command gives back a table of VM details and status fields.

Now let’s go to Horizon for this cloud, and look at the instance list. There’s our new VM. Let’s give it a floating IP by popping down the More menu and associating one of the floating IPs we have available (I only have two assigned to this demo cloud). 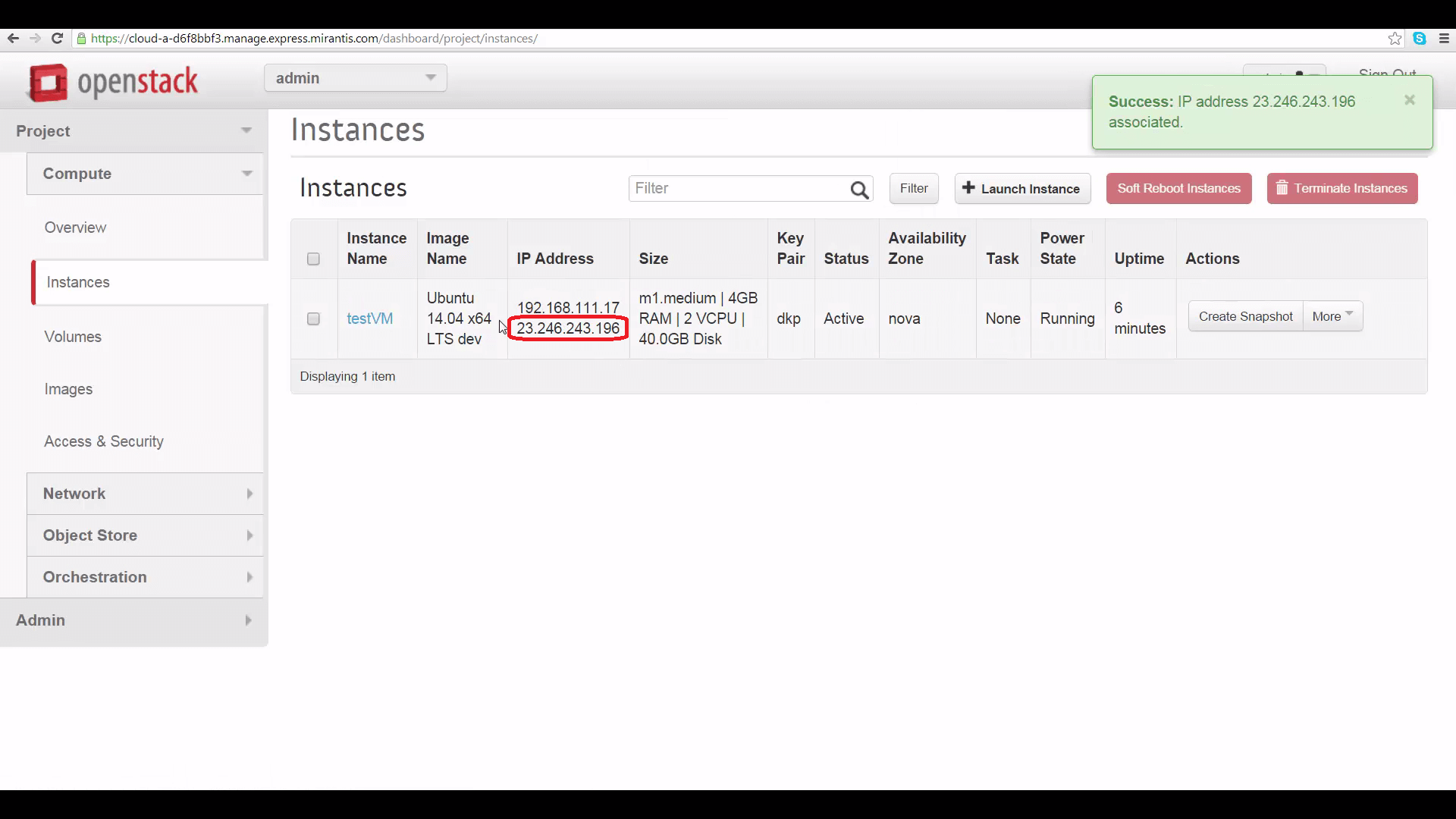 Our test VM is Running in Horizon. We've supplied it with a floating IP, so it can be accessed via the Internet.

And now, let’s browse to that IP address and filename, and see if Apache is working. It is! 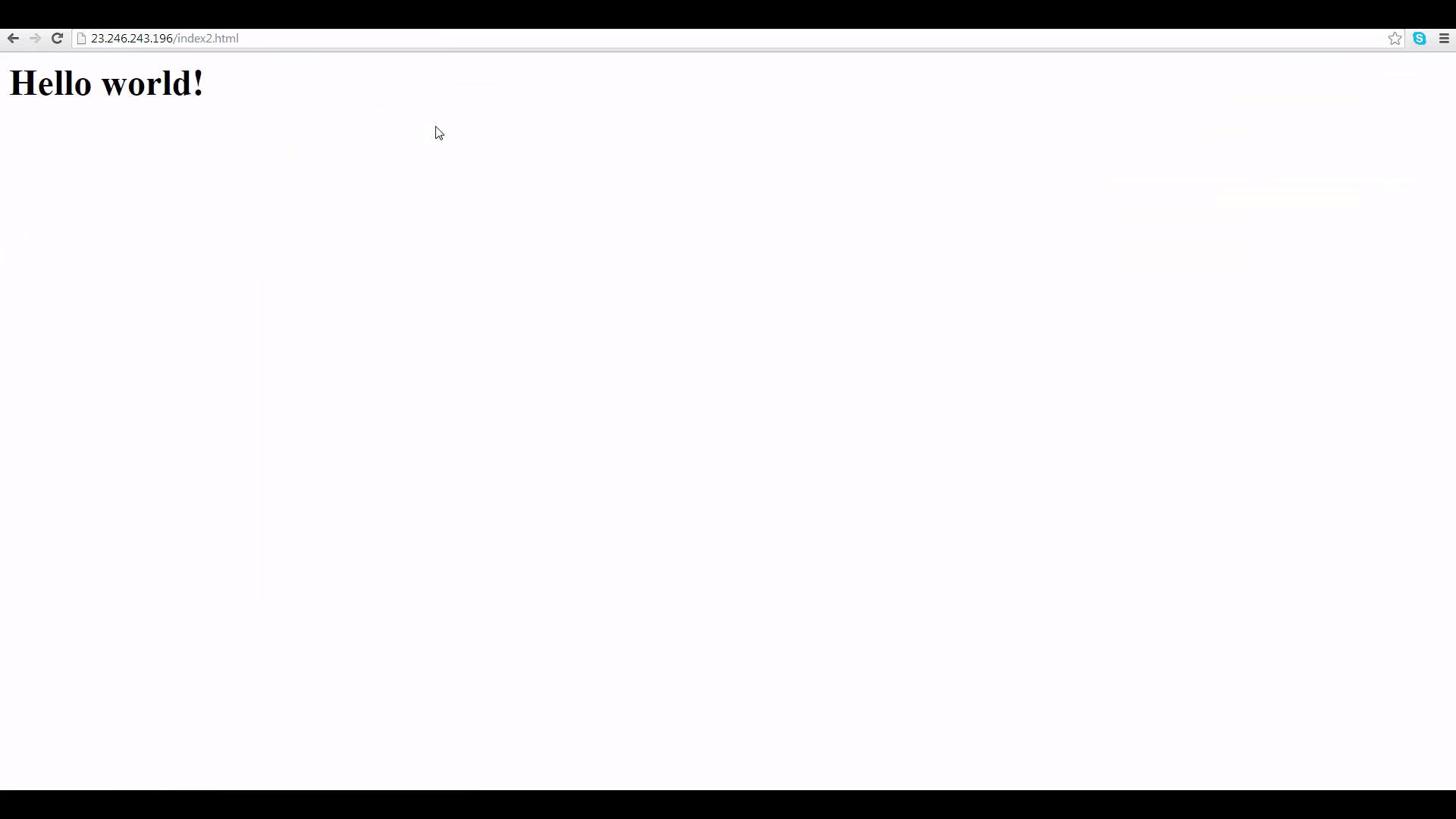 Our fancy custom index2.html file has been created on our test server, and is served by Apache.

This is just the beginning. In future tutorials, we’ll be digging much deeper into OpenStack command-line functions. Stay tuned!

Check out Express for yourself at https://express.mirantis.com.