When you talk about a company “doing open source,” people frequently assume that employees build the product in-house, then release the source code to the community. When it comes to Mirantis and OpenStack, however, the situation is just the opposite. We start with upstream OpenStack and build our product through a combination of testing, hardening patches, and additional open source features that make it easier to use without creating vendor lock-in.

Once you add a commercial distribution such as Mirantis OpenStack to the mix, things can seem complicated — particularly given that every piece of OpenStack code we work on is open source. Let’s take a look at how this process works so you can understand which parts of Mirantis’ work are, and are not, open.

How Mirantis works in the community

Although it would be simple to assume that Mirantis builds code in-house and then sends the result into the community, that’s not, in fact, how it works.

Mirantis OpenStack has zero proprietary code in it.

Let me say that again.

Mirantis OpenStack has zero proprietary code in it.

Let’s dig down a little and get some more details.

When you download Mirantis OpenStack, you get OpenStack code with multiple components that work together for optimized functionality.

All of these components are based on work from the Mirantis engineering team as well as from the OpenStack community, and virtually all of it is open source, as you can see from Figure 1:

In Figure 1, anything in green is open source, while items in blue are not. The latter include Mirantis OpenStack Express components and hardening patches for OpenStack packages.

Hardening patches for OpenStack packages is where a lot of people get tripped up. The actual patches that we use for hardening OpenStack are closed, but all of the code provided in them is open. (We’ll explain how that’s possible–as well as why we do it this way–in a moment.)

Let’s take a look at how all of this works in practice.

At this point, the bug fix becomes available to our customers while we wait for it to be accepted and merged by the OpenStack community.

We follow a similar process when we discover bugs in Linux packages such as KVM, libvirt, Open vSwitch, and even the Linux kernel, as well as for Python dependencies of OpenStack components, such as kombu, and tools and libraries required for Fuel, such as, MCollective, Puppet, and Cobbler. One significant distinction here, however, is that the git repository on review.fuel-infra.org is public, not private.

We track bugs in Fuel and its Python and Ruby dependencies in the Fuel project on Launchpad. Bugs in all other packages are tracked in the Mirantis OpenStack project.

Mirantis stays as close as possible to upstream OpenStack code, and as I said, we commit 100% of our bug fixes and patches upstream. However, reviewing those patches and getting them included in a stable OpenStack release takes time, so Mirantis provides some bug fixes to you, our users, ahead of the upstream to allow you to take advantage of them immediately.

While the source code of all software packages in the Mirantis OpenStack distribution is open, the breakdown of the difference between the code shipped in Mirantis hardened packages and the corresponding public stable release of OpenStack into individual patches and their relation to bugs (and other reasoning behind specific code changes) constitutes the core of Mirantis intellectual property, and is closed.

So what does that mean? Well, consider the thousands of patches that are submitted to OpenStack each release cycle. Because we don’t add proprietary extensions to Mirantis OpenStack, you know that every bit of code we ship is included in one of those patches. However, we don’t necessarily include every single patch in Mirantis OpenStack.

The “hardening patches” are simply the log that shows which specific bug fixes we chose to apply, why, and in what order — the record of how to get from the community stable branch to Mirantis OpenStack.

In other words, hardened packages are the log of our build of working OpenStack packages, a build that is designed for successful production deployment. Not all upstream patches are created with production deployment in mind; it’s that selection and application process, established through testing and review of patches and bugs, that distinguishes Mirantis OpenStack from any arbitrary build or application of patches.

Which Mirantis OpenStack components are open

All other Mirantis OpenStack product components, including Mirantis patches for non-OpenStack packages, are available to the general public and, where applicable, released under open source licenses, with Apache License 2.0 preferred. Some examples include:

Why do we do this? Because we recognize that open sourcing these components is a benefit to both the wider community and to the Mirantis product engineering team. For example, when Mirantis publishes the source code for Python libraries and Linux packages, users can build an ISO easily, without hacking to get the correct versions of third-party Python libraries. When users contribute bug fixes to the OpenStack master branch, the Mirantis OpenStack team can spend less time porting bug fixes across OpenStack releases.  It also means our engineers don’t have to spend time porting bug fixes between Mirantis OpenStack and the “vanilla” version.

The lifecycle of changes going into Mirantis OpenStack is summarized in Figure 2: 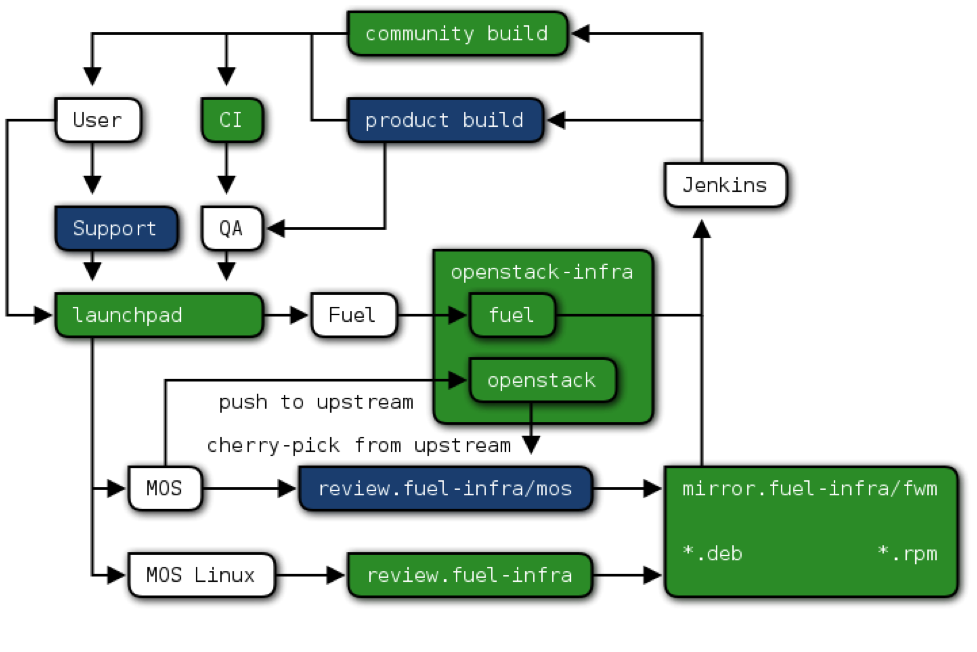 In particular, we use closed git repositories to track the hardening patches for OpenStack components, and a closed support portal to protect confidential customer information.

While we keep the intermediate builds of Mirantis OpenStack private until we have a build that our Quality Assurance team has approved for general availability, we publish builds based on the same code with the Mirantis branding removed. This way, users can experiment with the features from the future releases of Mirantis OpenStack, and yet can count on our quality standards and our support when deploying production environments using officially branded Mirantis OpenStack release builds.

Mirantis follows the responsible disclosure rules for non-zero-day security vulnerabilities. That means that embargoed vulnerabilities are reported and fixed in private, and not published until the disclosure date coordinated with other software vendors. Security-related bugs in Fuel and Mirantis OpenStack projects on Launchpad are marked private until the fix is published via the Mirantis OpenStack Technical Bulletins Process. Security vulnerabilities in base operating system packages are resolved based on the corresponding Linux distribution’s security announcements and security updates channels.

This process is completely open.  The teams responsible for specific packages for Fuel, Mirantis OpenStack components, and Mirantis OpenStack Linux produce both code and package specs for their packages. The Fuel OpenStack continuous integrations team creates all required git repos, gerrit, and branches.

As you can see, Mirantis works within the community to make OpenStack as strong as possible, while still providing the best possible options and creating new solutions for our customers. Mirantis is committed to making our code completely open and uses multiple methods to get you the quickest updates while working within the upstream community.