Popular Tags: Kubernetes | Lens | OpenStack | Containers | Docker | Helm | MCP | Edge | Virtlet | Spinnaker | NFV
Home > OpenStack Neutron IPv6 support in OpenContrail SDN
As private cloud (primary based on OpenStack) deployers and integrators lots of customer ask as about support of IPv6. Most of our deployments run on OpenContrail SDN&NFV. Reasons are described in our previous blogs (http://www.tcpcloud.eu/en/blog/2015/07/13/opencontrail-sdn-lab-testing-1-tor-switches-ovsdb/) . OpenContrail SDN supports IPv6 for quite long, but there is not so many real tests. Therefore we decided to share procedure how we configured and used IPv6 in OpenStack.

With cloud deployments there is significant growth of need for public IP addresses. These deployments are facing problems due to lack of IPv4 addresses. One of the solutions is to migrate to public IPv6.

We start with capability of IPv6 for internal communication between virtual machines within same virtal network and across different virtual network. Then we show how to expand IPv6 public addresses to external world. In our case we use Juniper MX routers as cloud gateway.

We need to consider few things when creating IPv6 virtual network. First one is adding also IPv4 subnet, because without IPv4 address instance can not connect to nova metadata api. Cloud images are built to use cloud-init to connect to API on 169.254.169.254:80 address. So if you create network without IPv4 subnet, you will not receive metadata to your instance. Second consideration is whether to you want to go to internet with your IPv6 capable instances. There is currently problem with IPv6 floating IP pool, so if you want to expand to external world, you need to boot to network with associated route target. 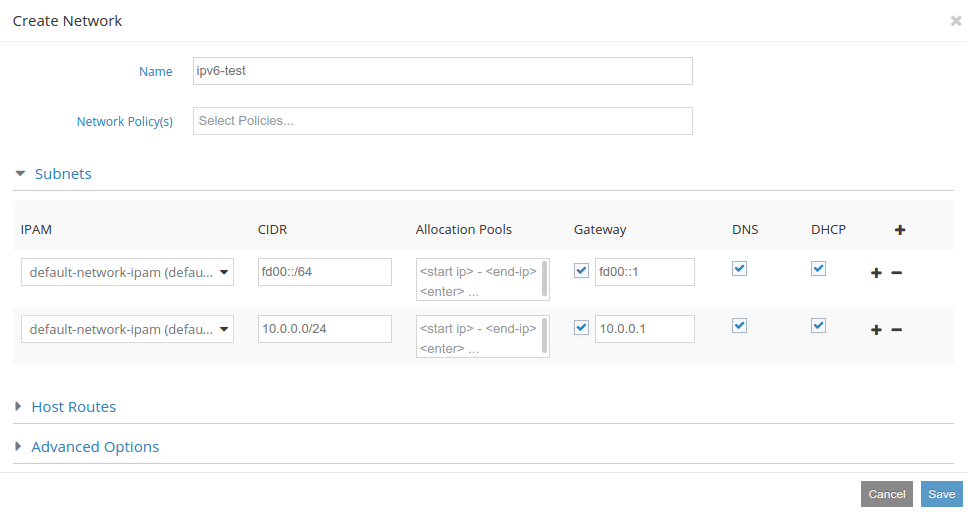 When the network is created we can boot instances. We will boot 2 of them to demonstrate functional communication. You will probably need to modify network interface configuration, because there is not enabled dhcp for IPv6. For nonpreemptive recieve you can use:

As you can see, you have both IPv4 and IPv6 address associated with interface of instance.

Before testing communication, we need to modify security groups to enable traffic. For testing purposes we will enable everything.

As you can see, we are now able to ping other instance.

This capability is nice, but not very useful without connecting to external world. We will create route with associated route target to expand routes to Juniper MX routers via BGP. In the picture below is sample architecture. There is one VRF CLOUD-INET created on each of MX routers. The route target associated with this VRF matches route target added to virtual network in Contrail. In the picture is demonstrated both IPv4 and IPv6 addresses propagated to same VRF. There is also INET virtual-router, that is connected to VRF via lt tunnel interfaces running ospf and ospf3. From this virtual-router is aggregated default route ::/0 from all internet routes from upstream EBGP. 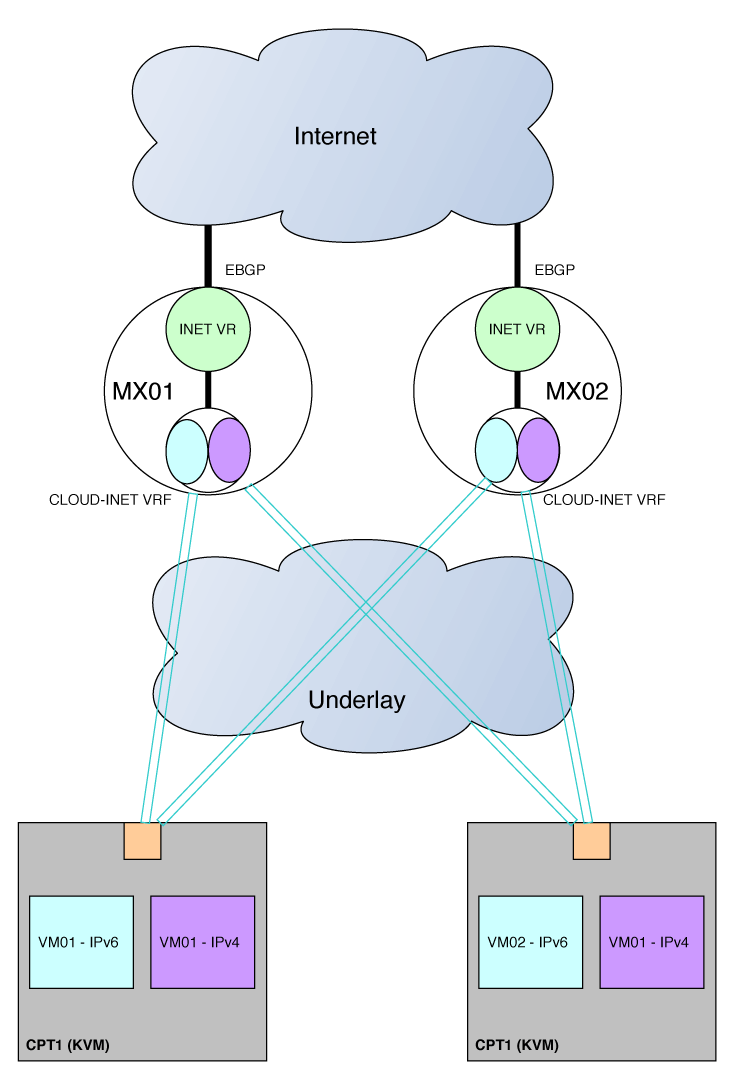 There are few things to configure on MX routers to enable IPv6 traffic from cloud. First is enabling ipv6 tunneling through mpls tunnels.

It is also good practice to filter what routes you export and import to and from cloud. We only need default route present in cloud. And we also want to filter only IPv6 addresses to be imported from Contrail, because of IPv4 pool created with IPv6 virtual network.

We can also verify that default route is propagated by ispecting routing tables in Contrail.

When we verify that instance have public IPv6 address, we can try to access internet.