One of the complexities of the OpenStack installation process is that there are multiple dependencies between components distributed among different nodes. As a result the Puppet agent must run multiple times on each node and preserve the specific order of execution. Here, I want to make the argument that use of a centralized orchestrator for managing Puppet agents can improve the process by making it more deterministic.

In this post, I’ll describe an approach for using Puppet’s Mcollective as a central orchestrator for push-based provisioning of nodes in OpenStack Compute and Swift clusters. We created deployment scenarios for these two cases and implemented them using Mcollective. These scenarios can be also implemented with other orchestration engines, such as Salt Stack.

The following diagram gives an overview of the architecture of the Mcollective orchestration manager function. 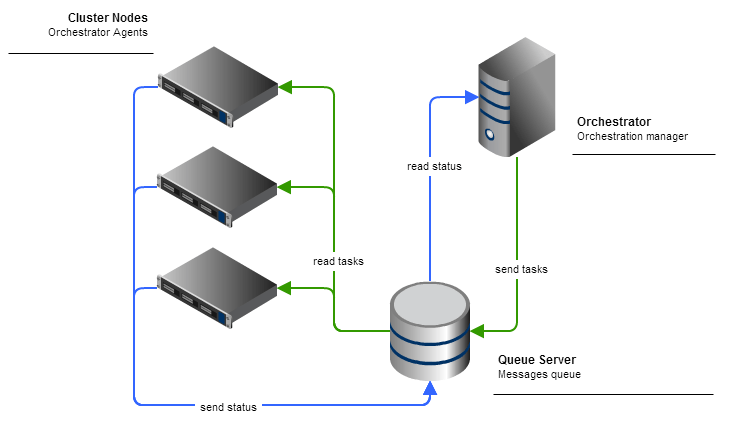 We’re installing the Essex release of the OpenStack platform. Three types of nodes can be deployed in a Compute cluster:

I’ve described these types of nodes in a previous post.

Step 1. Initial controller installation The Puppet agent on the primary controller node installs all components and initiates MySQL multi-master replication configuration. Due to the lack of a secondary controller at this step, some replication tasks can’t be finished successfully, but that’s okay. They’ll be finished on the following run.

The Puppet agent on the secondary controller node installs the components and initiates replication. Look for details of the MySQL replication approaches we’re using in this comprehensive article by Piotr Siwczak.

Step 2. Commencing replication: Once both controllers are up and running, the replication process begins. It requires one more run of the Puppet agent on every controller.

With MySQL-MMM managing replication, we need to wait until it assigns a writer IP address to the active master server before proceeding to installation of the Compute nodes. We need to make sure the writer IP address is accessible.

Step 3. Compute node installation: Compute nodes are installed independently from each other; however, database access is required for successful deployment of all compute services.

Compute nodes export some resources that can later be used by other modules, primarily the HAProxy module to compose configuration for the load balancer node.

Step 4. Endpoint node installation: The endpoint node must be installed last in this sequence. It uses exported data from the Compute and controller nodes to create a configuration of the load balancer that distributes requests between redundant services.

Now, armed with knowledge of the necessary steps, we create the following scenario:

There are three node roles defined for the Swift cluster by the Puppetlabs modules for installing OpenStack:

Step 3. Ring distribution: As storage nodes are not operational without ring files, the next step requires that ring files be distributed to storage nodes. The Puppet agent with the Swift module performs this function, and must be executed on each storage node.

Now we can compose a scenario for installation of the Swift cluster:

Here is a description of the environment for the orchestrator component in the nodes.yaml configuration file, using the following format:

We created a Ruby application os-orchestrator, which uses a MCollective::RPC module to communicate with the MCollective agents running on nodes via the AMQP RPC mechanism provided by MCollective. The BaseCluster class of the application handles operations with a configuration file and runs Puppet agents. SwiftCluster and ComputeCluster classes based on BaseCluster define the deployment logic described above.

Using the MCollective orchestrator can  help with more then just initial installation of the cluster. Many operational tasks, including but not limited to capacity management, rolling upgrades, and configuration changes, can be automated with an orchestrator. A sound approach is to write an orchestration application based on orchestrator components, which could transfer a sequence of orchestration steps into a single job, which could just be spawned in those scenarios.(e.g., upgrade_compute_nodes).