The latest stable release of OpenStack, codenamed Grizzly, revolutionizes the way user authentication works. You may have read some of the few articles available on this new authentication scheme. This post attempts to capture the full scope of this new feature. It focuses not on how Keystone issues tokens but rather the later stage, where existing tokens are used by clients to sign their API calls. These requests are later validated by OpenStack API endpoints. You’ll see first why you need tokens and then how PKI tokens can be used by OpenStack API endpoints to conduct user token verification without explicit calls to Keystone. We begin by explaining how clients connect to OpenStack.

So where does OpenStack begin and end? The users will say that it’s their cloud GUI or CLI. From the architectural perspective, however, OpenStack middleware ends on its API endpoints: nova-api, glance-api, and so on—they all expose their APIs over http. You can connect to these APIs using different clients. Clients can be either certified by a cloud vendor and deployed on its infrastructure (for example, a Horizon instance) or installed anywhere else (a python-novaclient installed on any laptop, pointing to a remote nova-api).

This boundary implies one important condition. Since the clients can reside anywhere, they cannot be trusted. Any request coming from them to any OpenStack API endpoint needs to be authenticated before it can be processed further.

Tokens—what they are and why you need them

So what do you have to do in this case? Does that mean you should supply each single API request with a username and password? Not so easy. Or maybe store them in some environment variables? Insecure. The answer to this is tokens. Tokens have one significant plus: they are temporary and short lived, which means it is safer to cache them on clients than username/password pairs.

In general, a token is a piece of data given to a user by Keystone upon providing a valid username/password combination. As said above, what is closely related to a token is its expiration date (which typically is hours or even minutes). The user client can cache the token and inject it into an OpenStack API request. The OpenStack API endpoints take the token out of user requests and validate it against the Keystone authentication backend, thereby confirming the legitimacy of the call.

The diagram below shows how tokens were originally generated by Keystone and then used by the client to “sign” every subsequent API request. 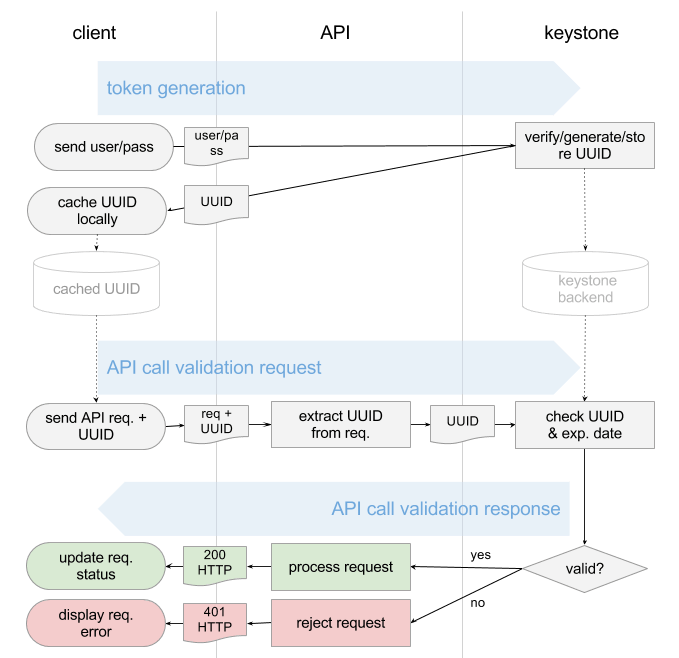 Based on supplied username/password pair (we assume it’s correct in this scenario and on the diagram):

As you can see from the above diagram, for each user call the API endpoints need to conduct online verification with the Keystone service. Imagine thousands of clients performing VM listings, network creation, and so on. This activity results in extensive traffic to the Keystone service. In fact, in production, Keystone proves to be one of the most loaded OpenStack services on the network side, but Grizzly gets rid of this problem quite nicely.

PKI tokens (Grizzly and on)

The diagram below shows how token validation is performed with the new method introduced in OpenStack’s Grizzly release. 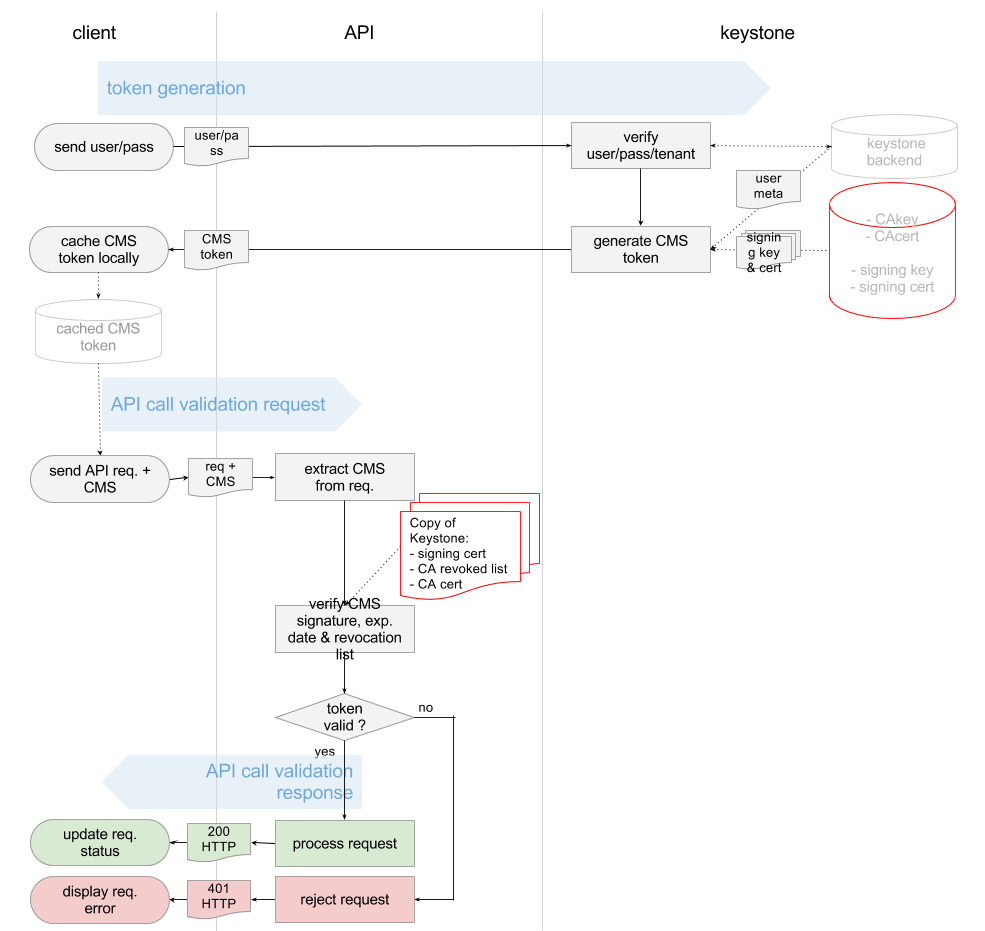 In general terms, with PKI tokens, Keystone is becoming a Certificate Authority (CA). It uses its signing key and certificate to sign (not encrypt) the user token.

On top of that, each API endpoint holds a copy of Keystone’s:

PKI tokens under the hood

To use PKI tokens in Grizzly, we need to generate all the keys and certs. We can do that using the following command:

This command generates the following files:

An example of the input data follows:

The CMS token is just the above metadata in CMS format, signed with Keystone’s signing key. It typically takes the form of a lengthy, seemingly random string:

The command used for this is:

Three things should be validated:

In order to do check the signature, all of the API endpoints need Keystone certs. These files can be obtained directly from the Keystone Service:

If the API service cannot find these files on its local disk, it will automatically download them from Keystone. The following command is used to verify the signature on the token:

If the signature is valid, the above command returns the metadata contained in CMS, which is further consumed by the API endpoint.

One of the extracted metadata fields is token’s expiration date, which is compared against current time.

The deletion of tokens is enforced by putting a given token onto a revocation list within the Keystone CA. By default, this list is being updated (pulled from Keystone) by API endpoints every second from the following URL:

The form of the list is a plain json file:

While “expires” field does not need further explanation, the “id” field looks somewhat cryptic. It is the md5 hash calculated out of the CMS user token: md5(cms_token). API endpoints also calculate md5 hashes out of CMS token received with user requests and search the matching md5-s on the “revoked” list. If no match is found, then the token is considered to be valid.

OpenStack API endpoints can use PKI tokens to conduct user token verification without explicit calls to Keystone. This can positively impact Keystone performance in the case of large installations where the number of user calls to OpenStack APIs can be overwhelming. One caveat, however: PKI does not guarantee privacy of the tokens. It is only used for signing, and not encryption. If you want to prevent tokens from being hijacked, you should secure all of the API endpoints using the HTTPS protocol.