Popular Tags: Kubernetes | Lens | OpenStack | Containers | Docker | Helm | MCP | Edge | Virtlet | Spinnaker | NFV
Home > Understanding VlanManager Network Flows in OpenStack Cloud: Six Scenarios
In a couple of recent posts I covered some fundamental concepts of OpenStack networking, including VlanManager and floating IPs. This post builds upon the recent content and aims to present how traffic flows in different scenarios addressed by OpenStack. Reading the prior posts (VlanManager, FloatingIPs) is highly recommended before going through this blog post. Also, consider before reading that all the scenarios presented below are based on multi-host networking mode. Single-host networking is omitted, as it is considered a SPOF and should be avoided in production deployments.
Demands regarding network communication and setup are very different for each OpenStack deployment. In most cases, at least the following demands need to be met:
Another thing to consider is tenant isolation. It can range from having each tenant “imprisoned” inside their fixed networks to 100% visibility across these networks on the other extreme. While the first scenario is typical for public clouds (tenants typically do not want to expose their servers to one another), the latter can be encountered in corporate clouds, where tenants belong to the same organization  (e.g., different developer groups) and often there is a need for their instances to communicate.
Consider the following network layout:

The above diagram shows two compute nodes connected by a network switch.

We have “tenant1” and “tenant2,” which hold different private networks, located in different vlans (100 and 102). Since we are running a multi-host networking setup, every compute node has direct access to external networks (Internet, etc.). For this purpose, an eth1 interface is used. Based on this diagram, I’m going show 6 scenarios that illustrate how different OpenStack networking scenarios are carried out.

Instances of tenant1 boot up and have their IPs assigned: 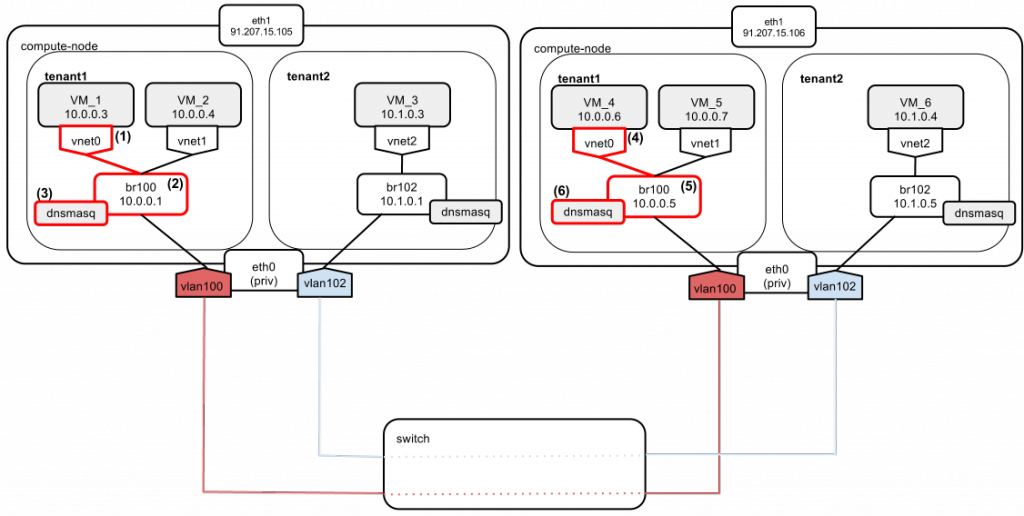 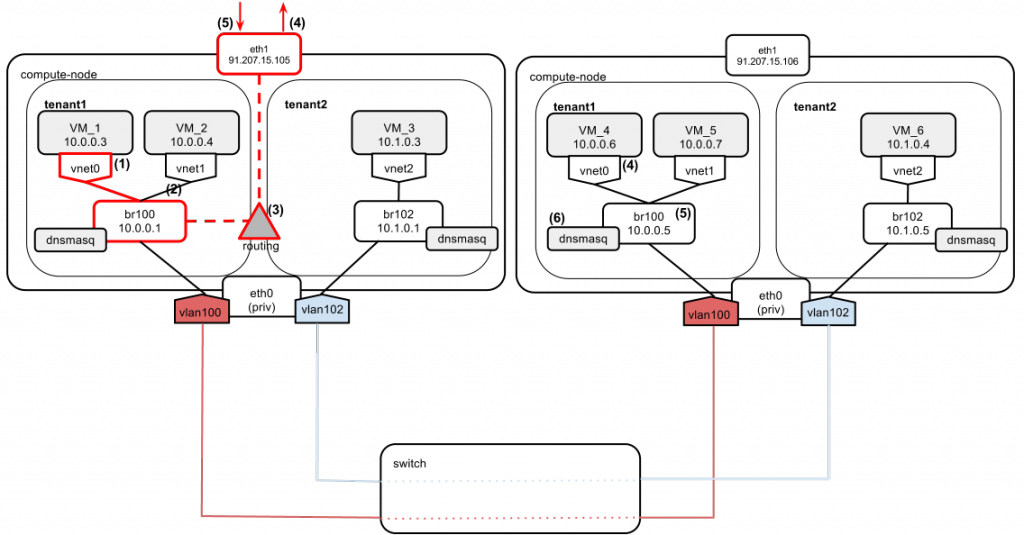 Let’s assume that tenant1 wants to ping from VM_1 to VM_2. We have two important things to note here:

Here’s what the traffic is going to look like:

Note:
Instances of the same tenant live in the same L2 broadcast domain. This broadcast domain expands on both compute nodes via the vlan100 interface and switch, which support 802.1Q vlan traffic. So all ARP broadcasts sent on the tenant1 network are visible on all compute nodes that have the vlan100 interface created. In this case, even if VM_1 and VM_2 are on a single host, the ARP broadcast sent in point (1) is also visible to VM_4 and VM_5.

Now let’s assume the ping goes from VM_1 to VM_5. Both of them still belong to tenant1, but are located on different physical compute nodes.

Now let’s take a look at the case of intertenant communication. As stated in the introduction to this post, in the case of internal/corporate clouds, “tenants” are often different developer groups or projects inside a single company. In this case, there is often a need to allow these projects to communicate, even though they may reside on different fixed IP networks.
Users allow traffic to their instances using security groups. In our scenario, tenant1 and tenant2 could simply let their instances communicate by making the following adjustments in their security groups:
tenant1: nova secgroup-add-rule default tcp 1 65535 10.1.0.0/24
tenant2: nova secgroup-add-rule default tcp 1 65535 10.0.0.0/24
tenant1 lets TCP traffic on port range 1-65535 from tenant2’s net (10.1.0.0) and vice versa.
There are two scenarios, depending on where instances are put by OpenStack:

This time the ping goes from VM_1 to VM_3. In this case, packet exchange happens between two tenants. It is critical to understand how the routing between their networks is carried out. 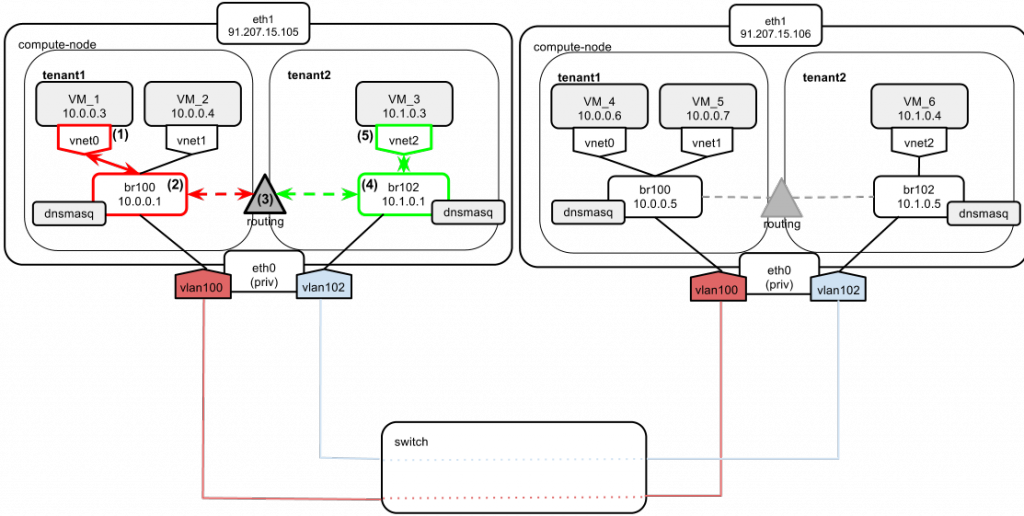 Note:
We see that br100 and br102 are given IP addresses from both tenants’ nets. A side effect of this is that compute nodes start to perceive these bridges as gateways to tenants’ networks. So the leftmost compute node starts to perceive br100 (10.0.0.1 as the gw to tenant1′ net) and br102 (10.1.0.1 as the gw to tenant2’s net). This is how the routing entries for networks might look like on the compute in our case:

This time the ping goes from VM_1 to VM_6. They both belong to different tenants and reside on different compute nodes. Pay special attention here to observe the “asymmetric routing” (i.e., requests from VM_1 to VM_6 go one way, but the response from VM_6 to VM_1 takes a different route). 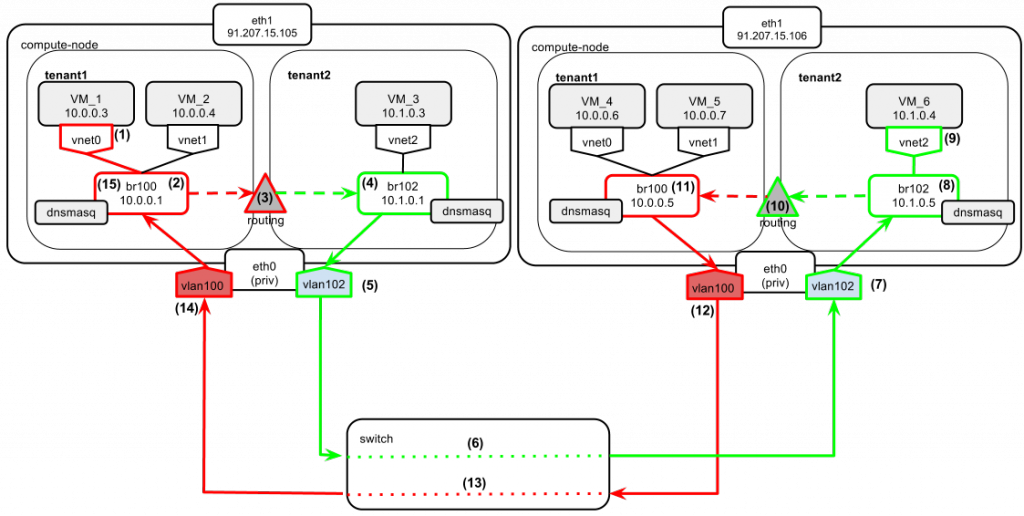 But what about this one?

OpenStack provisions networks “on demand”. This means that if you create a new network in openstack, the setup for it (i.e. dedicated bridge plus a vlan interface) is not propagated across all compute nodes by default. It’s only when an instance to be attached to a new network lands on the compute node that the network is actually bootstrapped. So it is common to have differences in network configurations between compute nodes. For example, on one compute node there could be br100, br102, br103 set up, while on another there could only be br102 present.

Such behavior may lead to a frustrating situation. Imagine we want to ping VM_1 to VM_6 again. But this time we have no tenant2 instances running on the leftmost compute node (so no bridge br102 and no vlan102 are present). But wait a minute — since bridge br102 was acting as a gateway to network 10.1.0.0, how do we get to tenant2’s network? The answer is simple — by default we can’t! 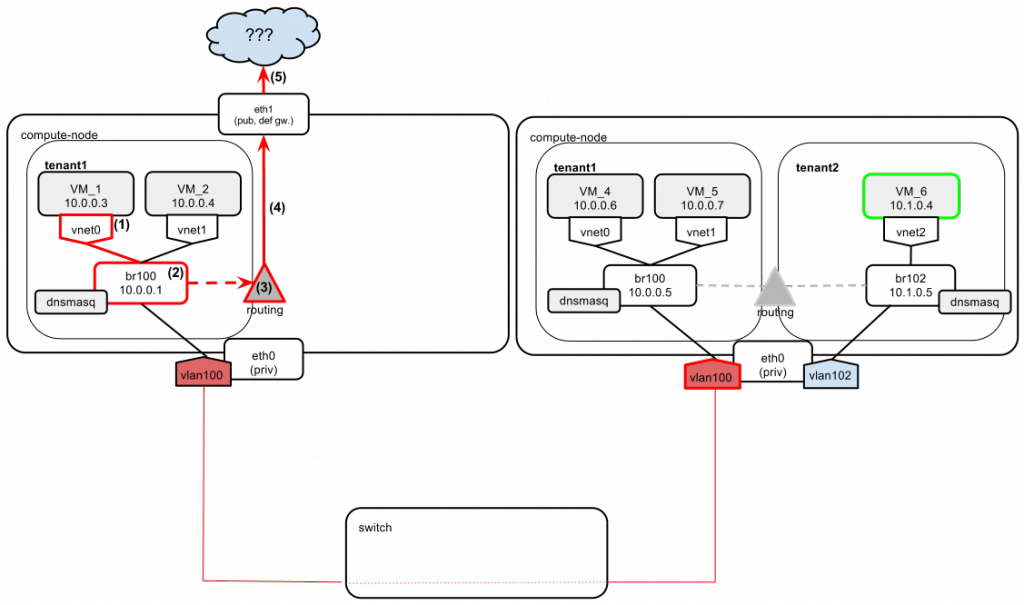 We now can see that intertenant connectivity cannot be ensured by relying only on fixed IPs. There are a number of potential remedies for this problem, though.

The simplest way (and the best in my opinion) would be to place the intertenant communication on floating IPs rather than on fixed IPs:

VM_1 wants to send a ping to VM_6. Both instances have floating IPs assigned. Given our understanding of how floating IPs work from the previous post, it is clear that these IPs will be attached as secondary IP addresses to eth1 interfaces on compute nodes. Let’s assume that the following floating IP pool was configured by the cloud administrator: 91.208.23.0/24. Both tenant1 and tenant2 allocated themselves addresses from this pool and then associated them with their instances in this manner:

So the situation is now as follows: 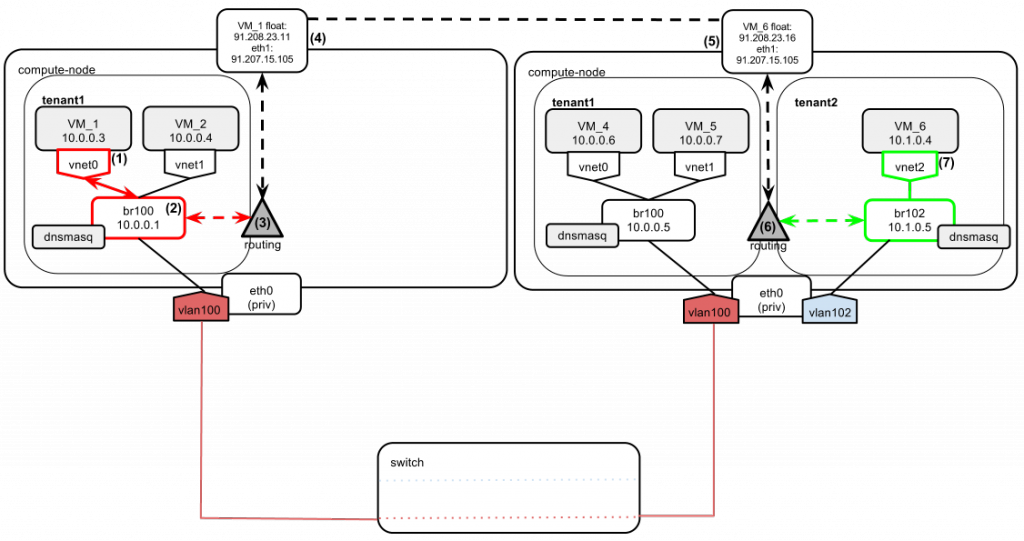 Let’s say VM_1 wants to ping VM_6. Tenants use their floating IPs to communicate instead of fixed.

The response from VM_6 to VM_1 goes the same way, but in the reverse order. There is one difference, though. Since the ICMP reply is considered to be “related” to the ICMP request previously sent, no explicit DNAT-ting is done, as the reply packet returns to the leftmost compute node via eth1. Instead, the kernel’s internal NAT table is consulted.

Other ways to ensure proper intertenant communications based on fixed IPs (as far as my knowledge of networking is concerned, and please note — these are only my personal thoughts on the problem) would require patching OpenStack code:

In this post I analyzed various scenarios of instance traffic, starting with the instance’s birth and boot-up, ending up on intertenant communication. The current networking model has its limitations and doesn’t always function as the user might be expecting. Still, OpenStack is highly flexible and extendable software. It provides users with the means to either tackle these limitations with proper configuration changes or address their specific needs with custom code extensions. Also, Quantum is coming in the next release and will introduce a small revolution to the whole networking concept, which probably means an end to all these pains.