In previous blog posts, we outlined a bare-metal provisioning framework for OpenStack (see: Beyond virtual machines and hypervisors,  Placement control and multi-tenancy isolation and Preparing images for bare-metal nodes using OpenStack Cloud). This time, we want to talk about networking.

Normally, when you run virtual instances, OpenStack does the networking configuration for you. This is not the case with bare-metal provisioning, since it means you go straight to a bare-metal switch and have your bare-metal ports configured for the project network.

You also need to be careful with the MAC addresses of bare-metal machines. With virtual instances, MAC addresses are generated randomly for each new VM, but in the case of bare metal, they're static. Moreover, as we pointed out in Beyond virtual machines and hypervisors, we generally want to have a service network manage the provisioning.

Let's look at one example, a deployment where we had to (a) implement automatic plugging of bare-metal instances into a project network and (b) resolve an issue with the storing of MAC addresses.

We had Juniper EX4200 and QFX3500 switches, which can be managed via the netconf protocol, which is like the XML-RPC protocol and is designed to manage network devices. For OpenStack networking, we used the standard VlanManager with multi_host feature, which didn’t require any modifications to work with bare-metal instances. VlanManager creates a bridge and starts the DHCP server (dnsmasq) for project vlans on hosts where instances are spawned in a project. So bare-metal nodes must receive IP-addresses by DHCP if they are plugged into the proper vlan. The DHCP runs on the bare-metal compute node (please see this post to get the details of how a bare-metal compute node works).

Below is a schematic diagram of the networking used in our solution. The dnasmasq service acts as a DHCP server. 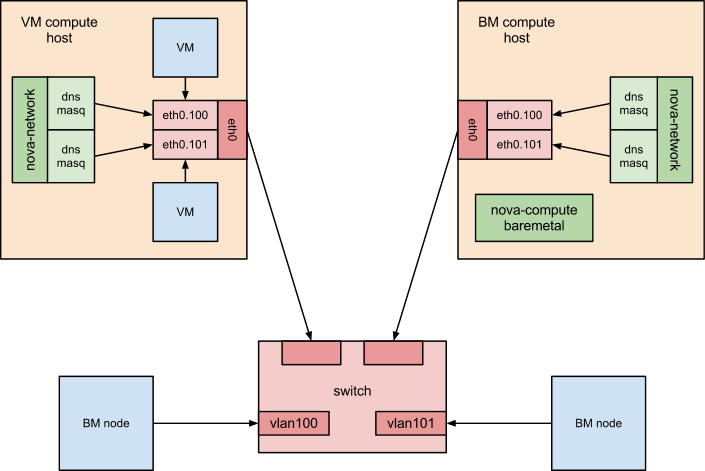 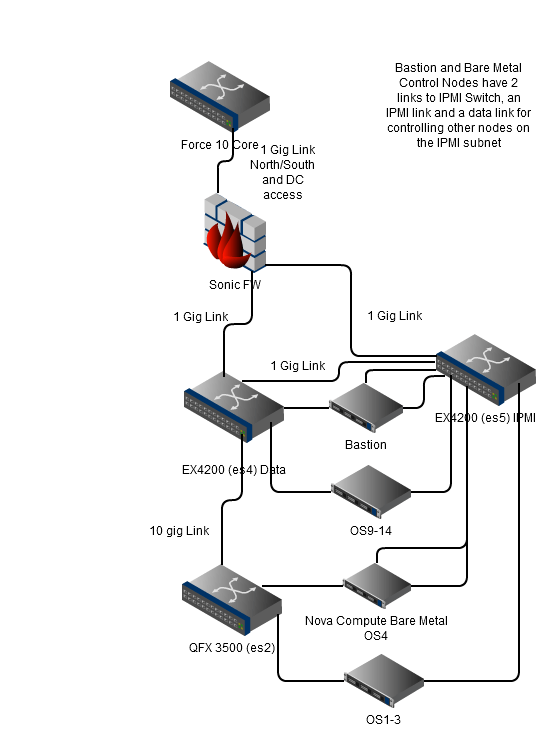 For our purposes it was enough to plug the bare-metal instance into a project vlan. To make it automatic, we implemented an abstraction layer for switch management and a driver for Juniper switches named JuniperNetworkManager. It’s located in nova/virt/baremetal/networkmgr/.

To use this manager you have to add the following strings to the nova.conf file on a bare-metal controller host:

Below are the basic steps of spawning and terminating bare-metal instances to show when the switch driver acts.

Termination of a bare-metal node:

Using VlanManager for networking and injection of MAC addresses of bare-metal machines directly into the database let us implement network management for bare-metal provisioning without any modifications in the core OpenStack code. This shows how OpenStack is a highly customizable platform that makes it easy to build custom solutions on top.