Setting Up a Kubernetes Learning Environment 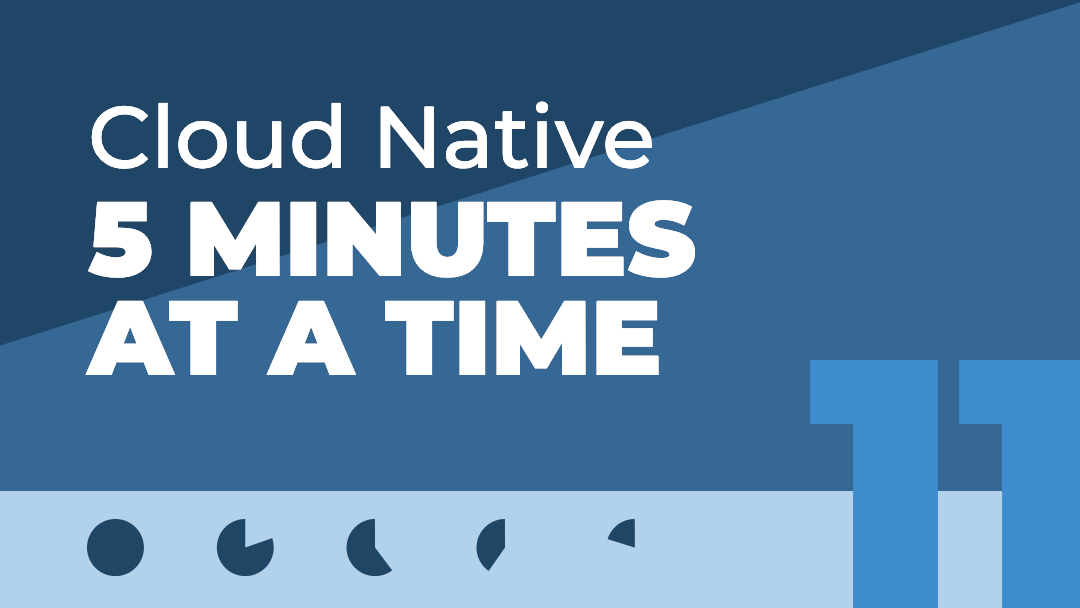 In the last lesson, we learned how Kubernetes orchestrates containers, who runs Kubernetes, and why. Today, we’ll set up a cluster on our local machine so we can get some hands-on experience.

As we’ll see in the next few lessons, a Kubernetes cluster can run in a wide variety of configurations according to its use case. For learning purposes, we’re going to start with a single-node cluster on our local machine.

In the “real world,” clusters will typically spread across multiple nodes (or machines), each of which will have dedicated roles like managing the cluster or running workloads. In this case, everything will happen on a single node. That will give us a relatively straightforward development environment in which we can figure out the fundamentals, before progressing to more complex configurations.

The first decision we need to make is which version of Kubernetes to install. Because Kubernetes is an open source system, it has given rise to a variety of alternative distributions with their own particular use-cases, just as the Linux kernel is the foundation of numerous Linux distributions. The k0s (pronounced “kay-zeros”) project, for example, is a distribution designed for maximum resource efficiency, so it might run (and scale) anywhere from Raspberry Pis to powerful servers in public or private clouds. The creators of Kubernetes distributions usually try to maintain full compatibility with “upstream” Kubernetes—the original, baseline project—so that users can utilize the full suite of open source tooling developed by the community.

To get started, we’re going to use a distribution called Minikube, which is designed specifically for learning Kubernetes.

Minikube requires about 2GB of RAM to run, and it wants 20GB of disk space, which is the amount it assigns for cluster usage by default. (You can configure it to use as little as 2GB if you’re short on space.) It works on macOS, Linux, or Windows, and depending on its configuration, it runs on a container, a virtual machine, a combination of the two, or bare metal. Most people will be running it through VMs, containers, or both. If you have Docker Desktop or Docker Engine installed (as in our previous unit), then you’re ready to get started.

On an x86-64 machine running macOS with the Homebrew Package Manager, installation is a simple terminal command:

Users with other CPU architectures and operating systems will want to consult the official installation instructions to download the version that is right for them.

Once Minikube is installed, make sure Docker is running, and then run the following command in the terminal:

You should see some friendly, emoji-illustrated status updates confirming that the system is running:

We can confirm that Kubernetes is running with another command:

This will list the nodes associated with our Kubernetes cluster. We should get a result that looks something like this:

All right—we have one node, and that makes sense, because we said that this would be a single-node cluster. But what’s kubectl, and why am I using it?

For the answer, we need to break down an important element of Kubernetes development: cluster access.

Exercise: Three ways of looking at a cluster

Users—and software agents—ultimately conduct any interaction with a cluster through the Kubernetes application programming interface (API). But many of those interactions are mediated by other applications that consume the API.

Three of the most commonly used applications for accessing and interacting with the cluster are:

None of these three tools are bound to a given cluster. You can use any of them to interact with multiple clusters from the same machine. But for now, we’re only concerned with our Minikube cluster.

To get a feel for these three methods of interacting with a cluster, we’re going to launch a service—essentially, an abstraction for the delivery of a particular piece of software functionality, as we saw in the last unit. In this case, our service will be an NGINX web server. Next, we’re going to observe our service with each of our three methods of cluster access. Don’t worry too much about the specifics of how we’re launching our service for the time being—in the coming lessons, we’ll examine that process in great detail. For now, we just want to get our feet wet interacting with a cluster.

A note on kubectl

Before we get started, we should very briefly discuss a few of the ways you can run kubectl. As we’ve seen, you already have an installation of kubectl on your system—this is built into Minikube, and you need to preface the kubectl command with minikube if you want to use it. You’re welcome to keep on doing this.

Alternatively, you can use an alias or symbolic link to map the command minikube kubectl to the more concise kubectl. Or if you prefer, you can install a separate instance of the tool which you will activate with the command kubectl. The choice is yours—but note that we’ll be using the simple command kubectl from here on out, so if you decide to use the minikube version without creating an alias or symlink, you’ll need to add minikube to the beginning of these commands.

In the terminal, enter the following command:

At this point, you probably have a pretty good guess as to what this is doing! We’re creating a deployment of an application—NGINX—based on the official NGINX container image, and we’re specifying that the container exposes port 80.

This creates a service from the deployment model we defined above; entering the command should return the result:

Minikube will create a network “tunnel” to make the new service accessible on our local machine, and automatically open the service in our web browser. We should see the NGINX welcome page here. (Note that your IP address and port may differ from the ones in the screenshot below.) 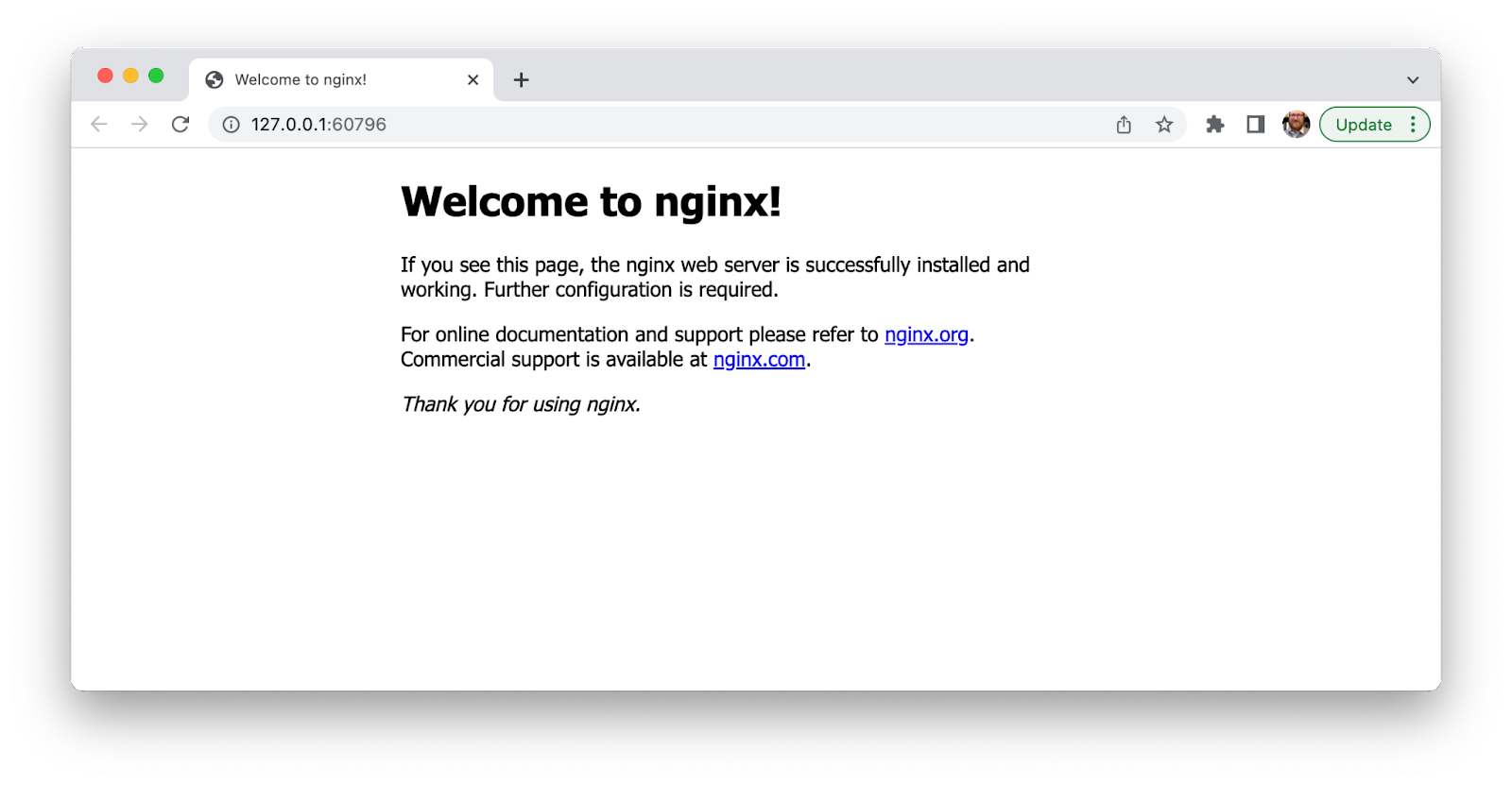 Stop the Minikube tunnel by pressing CTRL+C in the terminal. Even though we’ve stopped the tunnel, the service is still running in the cluster. We can get some basic information about it using kubectl:

If you want to save a few keystrokes, you can use svc instead of services. Either way, this should return something like the following, albeit with different IP addresses, and a different local port number:

Great. We see our nginx-test service, as well as the Kubernetes service itself.

We can also observe our services through the Kubernetes Web Dashboard. Minikube makes it easy to launch the dashboard from the command line—just enter:

This command will start another process that needs to run continuously in the terminal. In the web browser, click on the Service tab in the left sidebar. 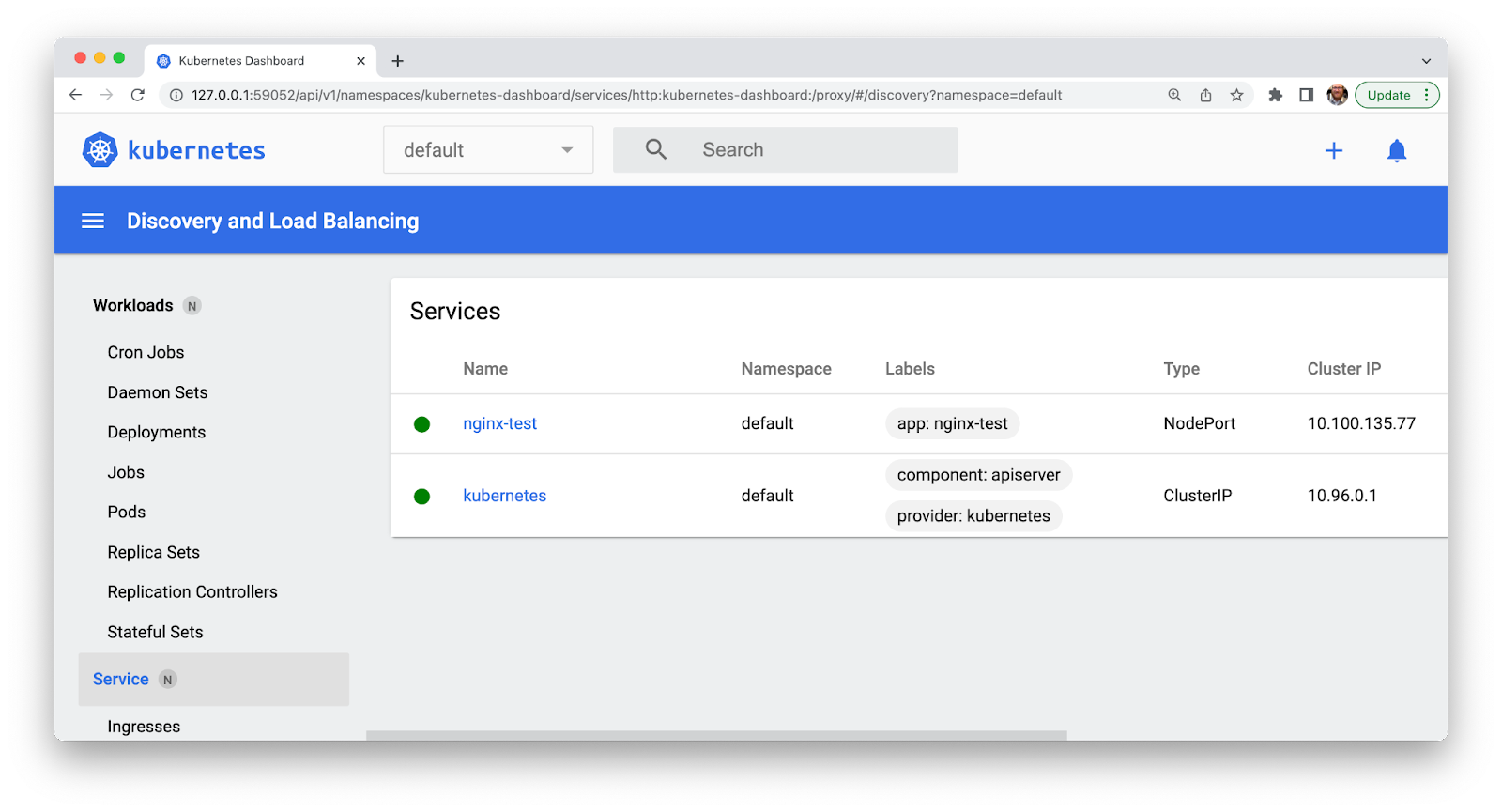 Here we can observe our services through a GUI.

Feel free to click around the Web Dashboard and explore. When you’re finished, we’ll observe our services from one more perspective. 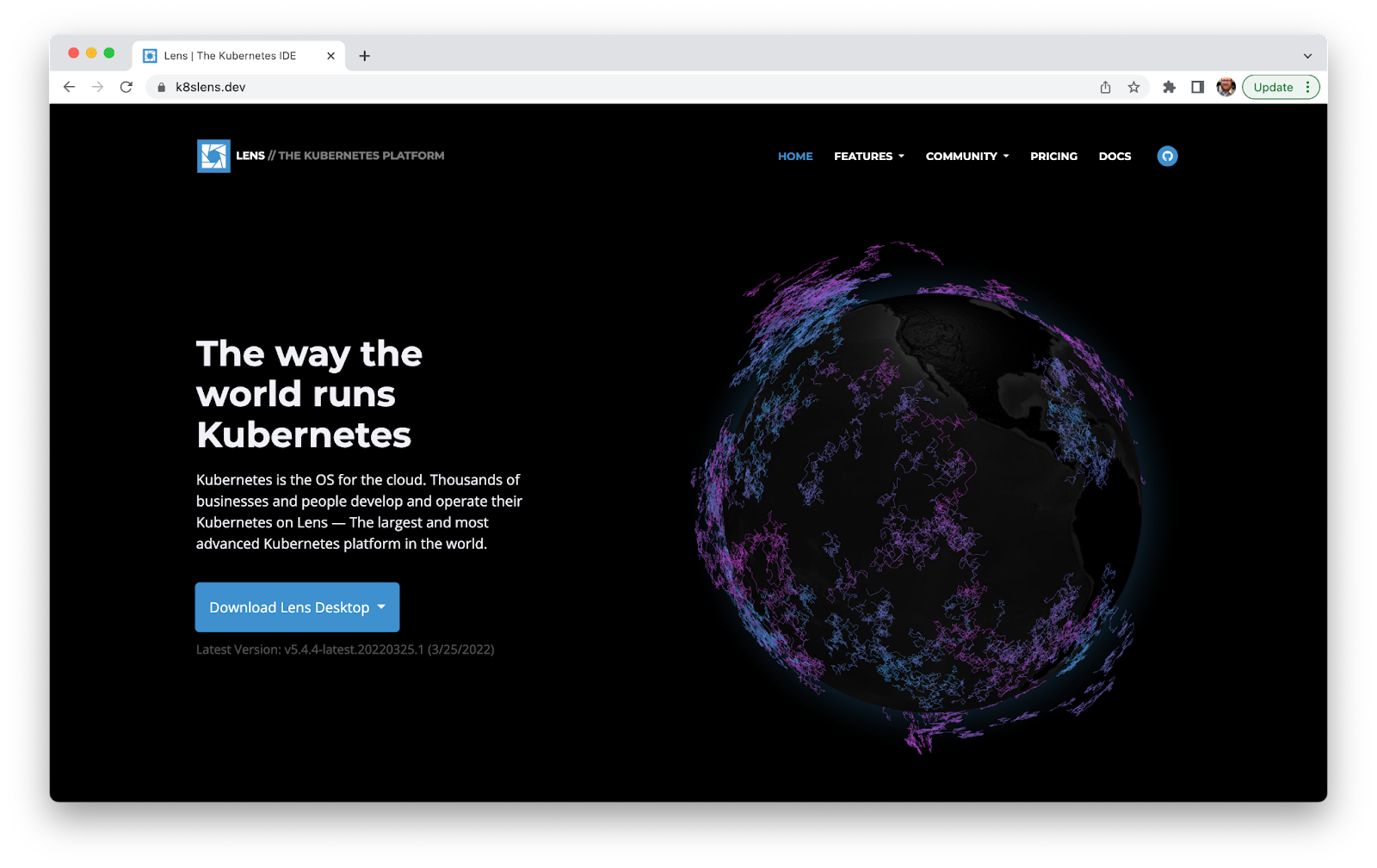 Run through the installer and account creation and open the application. It will automatically detect your Minikube cluster—click on “Catalog” in the left sidebar and then on the Minikube cluster to connect it to Lens. 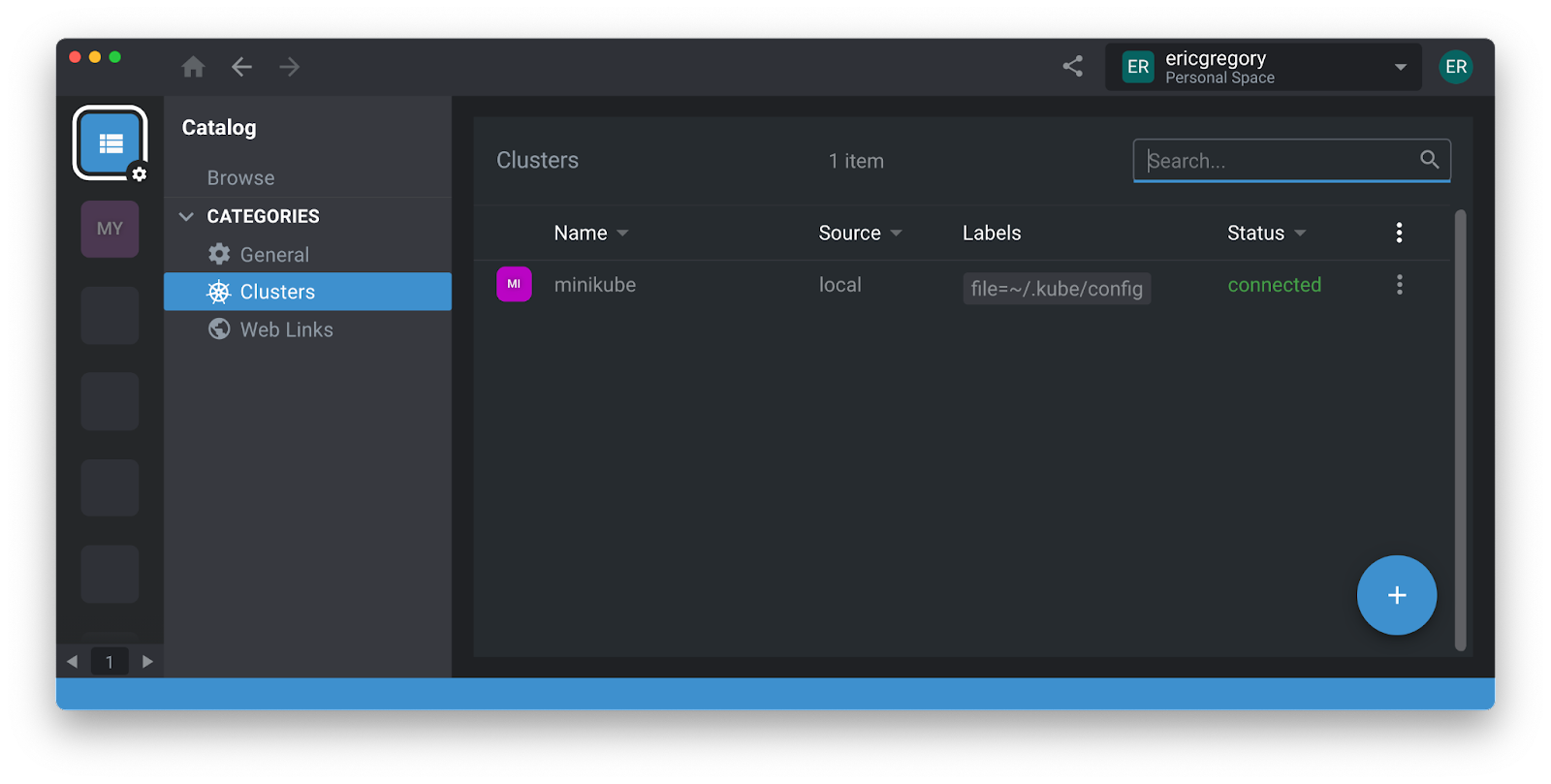 Once connected, open the Network dropdown from the left sidebar and click on Services. 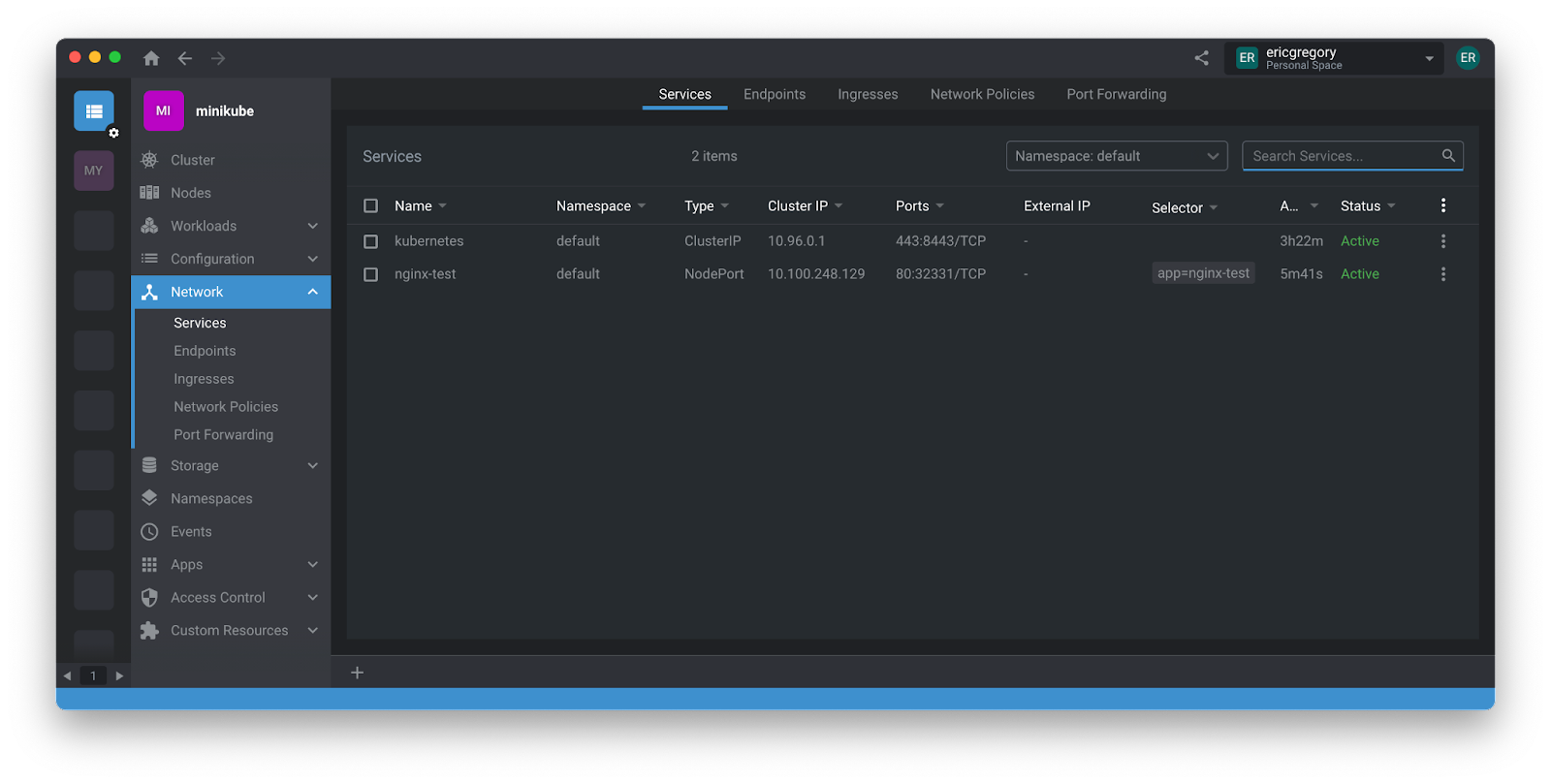 From here, you can click on the nginx-test service for more information. 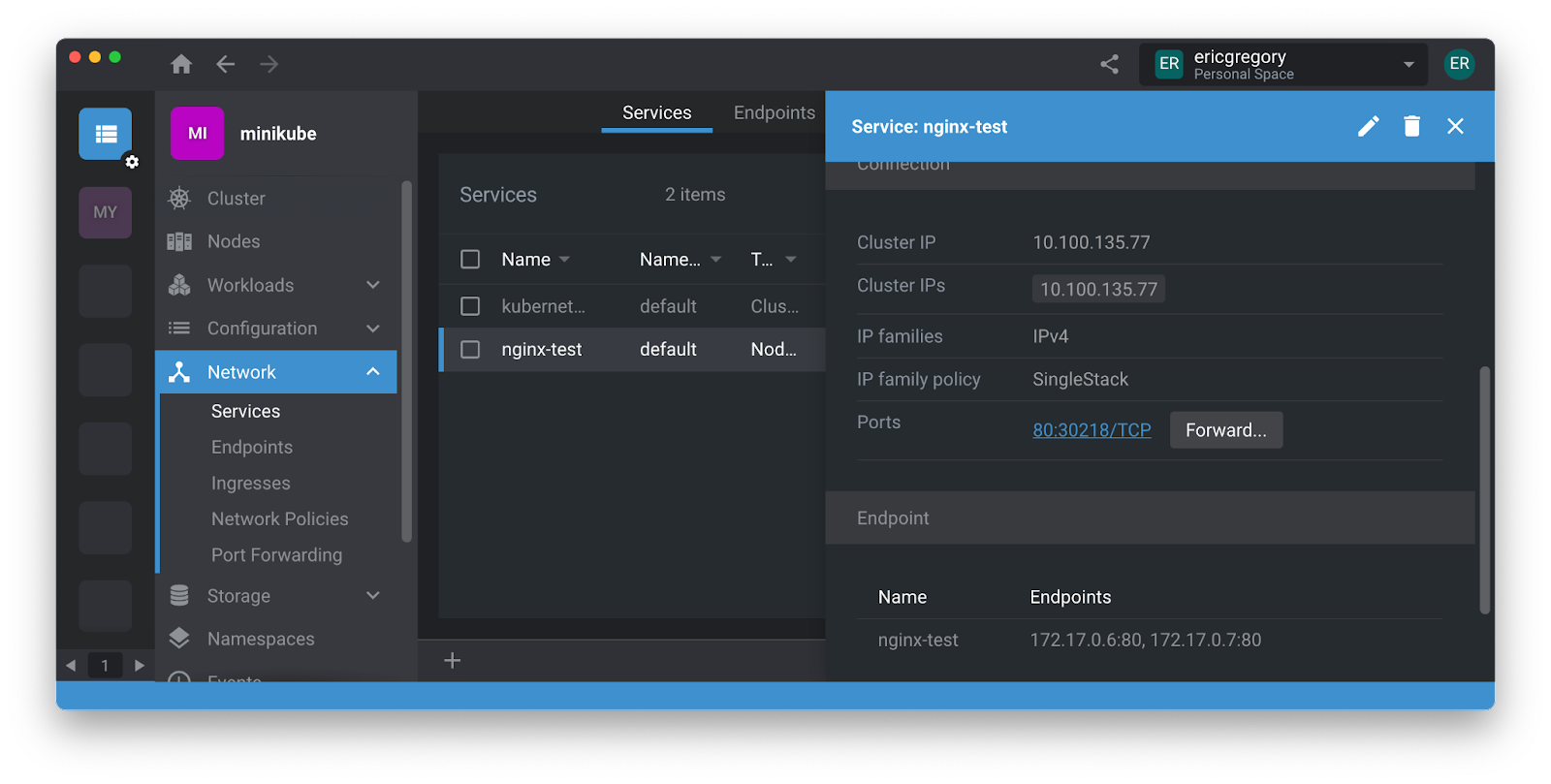 You can click the Forward button to forward the container port to a port on your host machine—accomplishing roughly the same thing as the Minikube tunnel, but with a technique that can be generalized to any Kubernetes service…not just the ones running in a local Minikube environment. 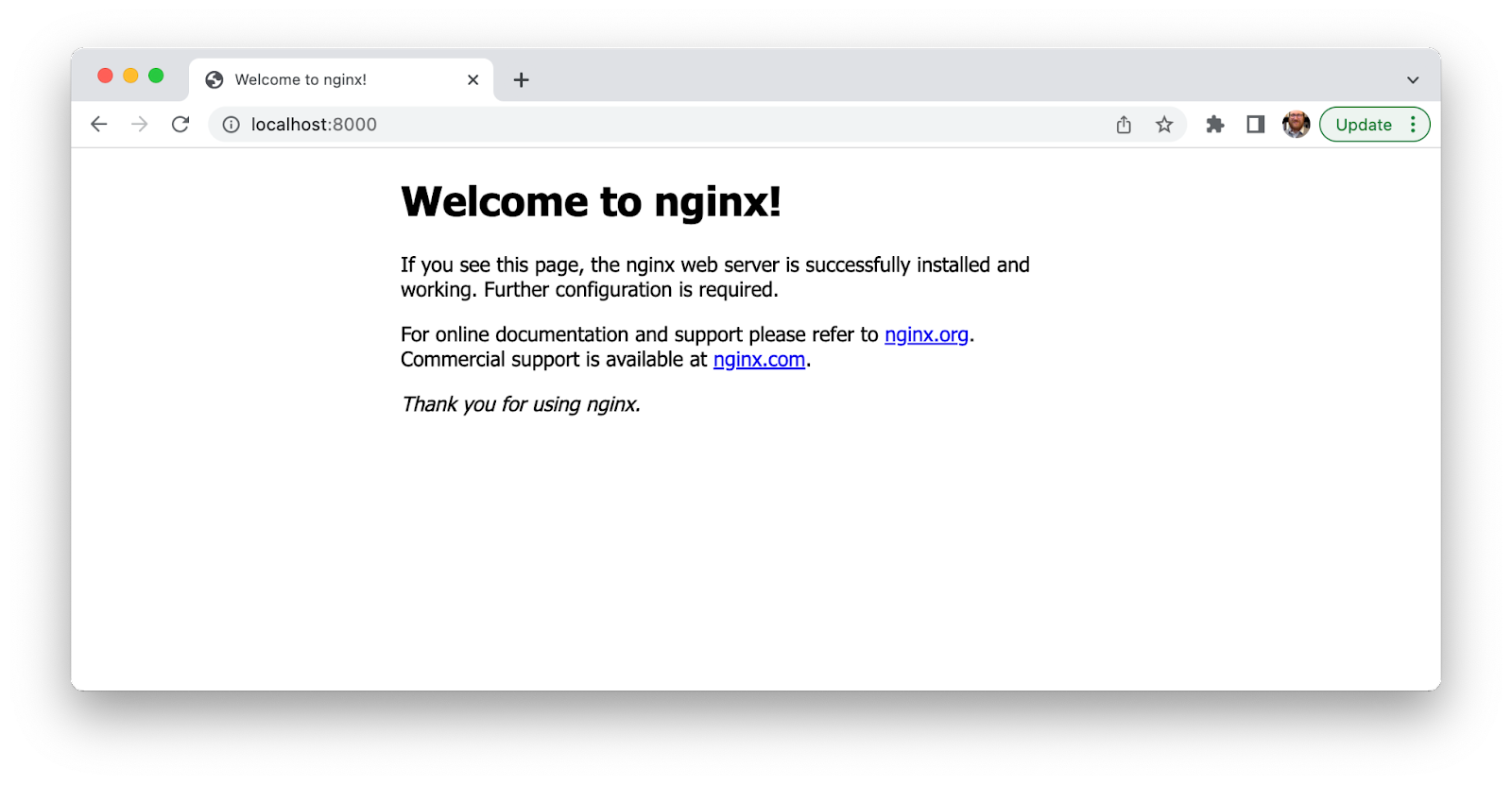 Whew—we’ve done quite a bit today! We’ve installed Minikube and Lens, and we’ve explored three different ways to interact with a cluster. Before we finish, let’s clean up. In the terminal, press CTRL+C to stop the dashboard process, then:

That’s it for today. Next time, we’ll break down the anatomy of a Kubernetes cluster.